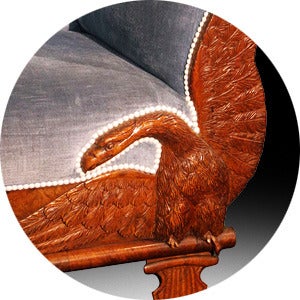 Biedermeier furniture represents the first modern European decorative style not dictated by the tastes of the aristocracy. Following the Napoleonic wars, a growing, wealthy urban middle class in the German-speaking states of Central Europe began to demand rights and privileges once granted only to nobles. To avoid trouble, the upwardly striving confined their political discussions to one another’s homes. And so the salon was born.

Cabinetmakers in cities such as Vienna, Berlin and Mainz began to offer goods that reflected the tastes and needs of the new class. The makers of Biedermeier furniture used little or no gilding, silver hardware or other lavish ornament. Ebonized trims are common on Biedermeier cabinetry, and neoclassical elements — lyre-shaped chair splats, carved scrollwork, table supports shaped like Greek columns. But the strongest aesthetic statement came from the wood — richly-grained, honey-colored, often book-matched veneers of walnut and fruitwood.

There are two iconic Biedermeier furniture forms, both made to outfit rooms designed for conversation. One is the sofa, deeply upholstered with a strong, architectural wooden frame. The second is the circular pedestal table, which stood at the center of the room, offering a surface on which to place coffee and cake services; or to roll out a map, or sketch out ideas on paper.

“Biedermeier” was originally a derogatory term — it derives from the pen names of two German magazine writers who mocked bourgeois manners. Looking at the elegant and refined pieces offered on these pages, that is now an amusing irony. 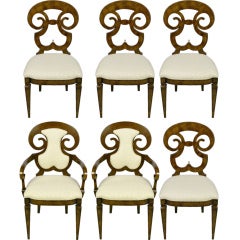 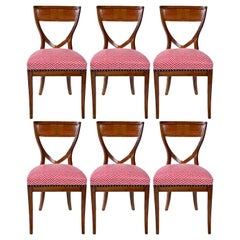 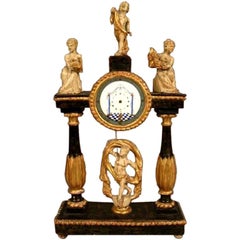 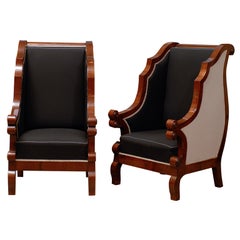 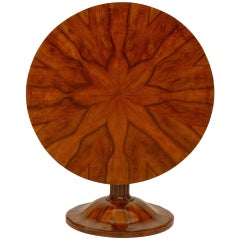 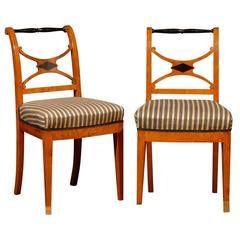 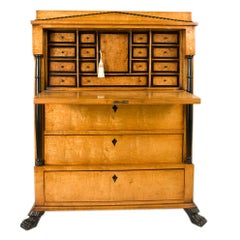 Austrian Biedermeier Bookcase
This very fine bookcase is in excellent condition and has great color and style. The book case has four shelves and can work for books or as pictured hear as a display cabinet for ob...
Category

Biedermeier Work Table
A very nice work table with a fabric basket in an open work surround. The compartmentalized interior surrounds the drop through to the basket and retains its original pin cushion. Wh...
Category

Small Danish Empire Chest of Drawers in Mahogany, circa 1810
A very lovely small Empire chest in mahogany with satinwood inlays, ebonized details and brass rosettes, with three drawers of various depths, and resting on a plinth with scalloped ...
Category

Small Danish Empire Chest of Drawers in Mahogany, circa 1810

Pair Biedermeier Armchairs
A pair of Biedermeier armchairs with an exposed wooden frame, upholstered seat and tufted back.
Category

Biedermeier Secretary Abattant
Mahogany secretary abattant, the fall front opening to a fitted interior with small drawers and compartments. Classical style with pedimented top and columns on either side.
Category

Biedermeier Secretaire
Biedermeier secretaire made of walnut, rootwood and ebonized wood. It has a fall front writing surface with interior drawers and a cubby hole. Lower section with exterior drawers.
Category

Pair of Swedish Mahogany Karl Johan Biedermeier Side Chairs, circa 1825