H 8 in. W 12 in. D 12 in.
Modernist Medallion by Tapio Wirkkala
By Tapio Wirkkala
Located in Sagaponack, NY
A rare two-sided medallion in copper having abstracted and geometric decoration, housed in a rosewood and copper presentation case.
Category

Pair of lamps, attributed to Tapio Wirkkala for Idman/Iittala

Wirkkala Copper For Sale on 1stDibs

Choose from an assortment of styles, material and more with respect to the wirkkala copper you’re looking for at 1stDibs. Frequently made of copper, metal and wood, every wirkkala copper was constructed with great care. Whether you’re looking for an older or newer wirkkala copper, there are earlier versions available from the 20th Century and newer variations made as recently as the 20th Century. A wirkkala copper, designed in the Scandinavian Modern or Mid-Century Modern style, is generally a popular piece of furniture. A well-made wirkkala copper has long been a part of the offerings for many furniture designers and manufacturers, but those produced by Tapio Wirkkala, Kultakeskus Oy and Idman are consistently popular.

How Much is a Wirkkala Copper?

Along with architect Alvar Aalto, the designer Tapio Wirkkala was Finland’s leading contributor to the Scandinavian interpretation of modernism in the mid-20th century. Prolific and innovative, Wirkkala excelled in a wide range of fields, including glass, furniture, porcelain, jewelry and tableware. The hallmark of his talent was an ability to impart a craft aesthetic based on natural forms — leaves, ice, bubbles, birds — to industrially produced designs.

A native of Helsinki, Wirkkala studied at the national School of Applied Arts and took up a career in graphic design. After serving in the Finnish army during World War II, he joined the glassmaking firm Iittala, an association that would continue to the end of his life. Wirkkala learned every aspect of glassmaking in keeping with his belief that an artist-designer should be involved in all stages of production. His best-known works for Iittala are vases and drinking vessels that resemble either carved ice or icicles. In 1956, Wirkkala began a long relationship with the porcelain maker Rosenthal, for whom he designed elegant table pieces, such as the Finlandia coffee service and the biomorphic Pollo vases.

House Beautiful magazine declared Wirkkala’s Leaf platter the “most beautiful object” of 1951. (The acclaim led to his brief employment stint with industrial designer Raymond Loewy in New York.) That platter was one of the first designs Wirkkala made using laminated sheets of plywood sanded to a smooth surface that resembles an abstract leaf. It would go on to become a motif in many Wirkkala furniture pieces — most notably in inlaid coffee tables for Asko — and in a sense these are the works most emblematic of his personal aesthetic. Wirkkala was a traditionalist in many ways, but he had a modernist’s practical approach, incorporating his leaf-like spirals into simple, functional objects. That is the core attraction of Wirkkala’s designs: They stand out with a striking, sculptural energy yet blend in as part of a warm and comfortable decor. 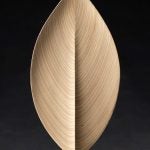