H 36.82 in. W 33.86 in. D 35.44 in.
Vladimir Kagan Contour Loveseat and Footstool in Tan Leather with Natural Walnut
By Vladimir Kagan
Located in Clifton, NJ
Resisting the move to ‘modern’ hard angles in the 1950s, the Kagan Contour series is iconic among midcentury designs for its emphasis on natural materials and hand craftsmanship. The...
Category

H 34 in. W 60 in. D 35 in.
Wonderful Vladimir Kagan Contour Loveseat
By Vladimir Kagan
Located in Munich, DE
Walnut base and wonderful rough fabric. All original and perfect condition. LOCATED IN HAMBURG
Category

H 36 in. W 31.75 in. D 41 in. L 36 in.
Spectacular "Contour" Rocking Chair by Vladimir Kagan, 1953
By Vladimir Kagan
Located in Milan, IT
With the sinuous curves that all pieces by the historic Vladimir Kagan boast of, is the "Contour" rocking chair designed in the year 1953. The piece available has been re-upholstere...
Category 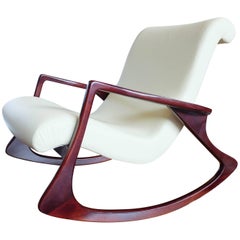 H 34.65 in. W 33.86 in. D 29.53 in.
Vladimir Kagan Two Position Contour Rocking Chair and Foot Stool
By Vladimir Kagan
Located in New York, NY
This two position rocking chair has all of the Classic Kagan elements that made him one of the icons of Mid-Century design. It's fluid lines and dramatic profile will make this chair...
Category

Set of Fourteen Contour Back Dining Chairs by Vladimir Kagan

H 37 in. W 20 in. D 28 in.
Vladimir Kagan "Contour" Chair in Leather
By Vladimir Kagan
Located in New York, NY
Incredibly sculptural rocking chair by Vladimir Kagan, designed in 1953, newly upholstered in ivory leather. Walnut frame in excellent vintage condition. This example is from the 19...
Category

H 33 in. W 31 in. D 44 in.
Vladimir Kagan 'Contour' Rocking Chair, Rare Oak, 1960s
By Vladimir Kagan
Located in Los Angeles, CA
A very rare example in oak, this Vladimir Kagan contour rocker is as collectible as it is beautiful and a fine choice as an investment for collectors and an heirloom for generations....
Category

H 33 in. W 60 in. D 31 in.
Vladimir Kagan Walnut 'Contour' Rocking Lounge Chair and Ottoman, Signed
By Vladimir Kagan
Located in Los Angeles, CA
This incredible Vladimir Kagan contour rocking lounge chair and ottoman is as collectible as it is beautiful and a fine choice as an investment for collectors and an heirloom for gen...
Category

H 35.5 in. W 29 in. D 57 in.
Contour Low Back Lounge Chair Offered by Vladimir Kagan Design Group
By Vladimir Kagan
Located in Clifton, NJ
Contour low back lounge chair in dark brown upholstery and medium brown wood base. Vladimir Kagan (1927-2016) emigrated to the United States from Germany in 1938. He studied Archit...
Category

How Much is a Vladimir Kagan Contour?

A vladimir kagan contour can differ in price owing to various characteristics — the average selling price 1stDibs is $18,500, while the lowest priced sells for $6,900 and the highest can go for as much as $38,900.

The pioneers of modern furniture design in America in the mid-20th century all had their moments of flamboyance: Charles and Ray Eames produced the startling, biomorphic La Chaise; George Nelson’s firm created the Marshmallow sofa; Edward Wormley had his decadent Listen to Me chaise. But no designer of the day steadily offered works with more verve and dynamism than Vladimir Kagan. While others, it seems, designed with suburban households in mind, Kagan aimed to suit the tastes of young, sophisticated city-dwellers. With signature designs that feature sleekly curved frames and others that have dramatic out-thrust legs, Kagan made furniture sexy.

Kagan’s father was a Russian master cabinetmaker who took his family first to Germany (where Vladimir was born) and then to New York in 1938. After studying architecture at Columbia University, Kagan opened a design firm at age 22 and immediately made a splash with his long, low and sinuous Serpentine sofa. Furniture lines such as the Tri-symmetric group of glass-topped, three-legged tables and the vivacious Contours chairs soon followed.

Kagan’s choices of form and materials evolved through subsequent decades, embracing lucite, aluminum and burl-wood veneers. By the late 1960s, Kagan was designing austere, asymmetrical cabinets and his Omnibus group of modular sofas and chairs. For all his aesthetic élan, Kagan said that throughout his career, his touchstone was comfort. “A lot of modern furniture was not comfortable. And so comfort is: form follows function. The function was to make it comfortable,” he once commented. “I created what I called vessels for the human body.”

A diverse group of bodies have made themselves at home with Kagan designs. Among the famous names who commissioned and collected his designs are Marilyn Monroe, Gary Cooper, Andy Warhol, David Lynch, Angelina Jolie and Brad Pitt, and firms such as Gucci and Giorgio Armani. His work is in numerous museum collections, including those of the Victoria & Albert and the Metropolitan Museum of Art.

Because of its idiosyncrasy, Kagan’s work did not lend itself to mass-production. Kagan never signed on with any of the major furniture-making corporations, and examples of his designs are relatively rare. As you will see from the offerings on 1stDibs, even decades after their conception, Kagan pieces still command the eye, with their freshness, energy, sensuality and wit.

Vladimir Kagan Furniture are available on 1stDibs for sale. These distinctive items are often made of fabric and designed with extraordinary care. In our Vladimir Kagan Furniture collection, there are many options to choose from, although brown editions of this piece are particularly popular. 216 vintage editions of these items are in stock, while there are 26 modern editions to choose from as well. Many of Vladimir Kagan's original furniture was created during the 19th century in the Mid-Century Modern style in North America. Vladimir Kagan Furniture prices can vary depending on size, time period and other attributes. On Amazon, the price for these items starts at $1,200 and tops out at $60,000, while pieces like these can sell for $9,100 on average.

Finding the Right Seating for You

With entire areas of our homes reserved for “sitting rooms,” the value of quality antique and vintage seating cannot be overstated.

Fortunately, the design of side chairs, armchairs and other lounge furniture — since what were, quite literally, the early perches of our ancestors — has evolved considerably.

Among the earliest standard seating furniture were stools. Egyptian stools, for example, designed for one person with no seat back, were x-shaped and typically folded to be tucked away. These rudimentary chairs informed the design of Greek and Roman stools, all of which were a long way from Sori Yanagi's Butterfly stool or Alvar Aalto's Stool 60. In the 18th century and earlier, seats with backs and armrests were largely reserved for high nobility.

The seating of today is more inclusive but the style and placement of chairs can still make a statement. Antique desk chairs and armchairs designed in the style of Louis XV, which eventually included painted furniture and were often made of rare woods, feature prominently curved legs as well as Chinese themes and varied ornaments. Much like the thrones of fairy tales and the regency, elegant lounges crafted in the Louis XV style convey wealth and prestige. In the kitchen, the dining chair placed at the head of the table is typically reserved for the head of the household or a revered guest.

Of course, with luxurious vintage or antique furnishings, every chair can seem like the best seat in the house. Whether your preference is stretching out on a plush sofa, such as the Serpentine, designed by Vladimir Kagan, or cozying up in a vintage wingback chair, there is likely to be a comfy classic or contemporary gem for you on 1stDibs.

With respect to the latest obsessions in design, cane seating has been cropping up everywhere, from sleek armchairs to lounge chairs, while bouclé fabric, a staple of modern furniture design, can be seen in mid-century modern, Scandinavian modern and Hollywood Regency furniture styles.

Admirers of the sophisticated craftsmanship and dark woods frequently associated with mid-century modern seating can find timeless furnishings in our expansive collection of lounge chairs, dining chairs and other items — whether they’re vintage editions or alluring official reproductions of iconic designs from the likes of Hans Wegner or from Charles and Ray Eames. Shop our inventory of Egg chairs, designed in 1958 by Arne Jacobsen, the Florence Knoll lounge chair and more.

No matter your style, the collection of antique, new and vintage seating on 1stDibs is surely worthy of a standing ovation.