H 33 in. W 27 in. D 27 in.
Pair of New Upholstered Midcentury Armchairs with Oak Base, USA, 1950s
Located in Berlin, DE
Solid oak base and covered in Dedar Aut Aut Fabric. The chairs are typical for their time and reminiscent of chairs by Jens Risom.
Category

H 31.25 in. W 25.25 in. D 23 in.
Mid-Century Modern Teakwood Upholstered Armchair
Located in Stamford, CT
Mid-Century Modern style teakwood armchair with upholstered seat and curved back. Please note of wear consistent with age including scratches and finish loss as seen on the back of t...
Category 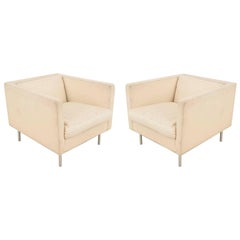 H 24.5 in. W 31 in. D 27 in.
Mid Century Caned Armchair with Upholstered Seat and Back
Located in Greenwich, CT
Vintage Caned Armchair newly ebonied and newly upholstered seat and back. Casters on two front legs.
Category

Mid Century Caned Armchair with Upholstered Seat and Back

H 30 in. W 32 in. D 31 in.
Mid-Century Modern Style Solid Wood Armchair Upholstered in Textile
By Jorge Elizondo
Located in San Miguel de Allende, Guanajuato
Add a little statement like this armchair to your living room or office. The Youban armchair features long legs with a round top that supports the design of the armrest. Unique textu...
Category

H 36.23 in. W 30.32 in. D 33.47 in.
Mid-Century Modern Style Solid Wood Armchair Upholstered in Textile
By Jorge Elizondo
Located in San Miguel de Allende, Guanajuato
Eluney lounge chair is made of solid wood, we use FCS certified wood, which provide not only high durability, but fair wages and safe work conditions for everyone involved. Beautiful...
Category

H 27.61 in. W 21.65 in. D 23.55 in.
Mid-Century Modern Style Solid Wood Armchair Upholstered in Textile
By Jorge Elizondo
Located in San Miguel de Allende, Guanajuato
When it comes to design, the goal is to give each piece spirit. Our Nolia armchair and it’s poise makes a grand entrance each and every time. Come see who else we’ve brought to life....
Category

H 31.5 in. W 24 in. D 25.5 in.
Mid-Century Upholstered Bentwood Armchair with Padded Armrests by Thonet
By Thonet
Located in Boston, MA
Upholstered in a soft textile in vibrant red, this Thonet armchair is Classic modernist bentwood with a punch. The rounded seat and seat back rise above tapered legs. The perky armre...
Category

H 29.5 in. W 23.75 in. D 20.5 in.
Mid-Century Upholstered Lounge Chair
Located in Boston, MA
With its wide winglike ams, tapered back and rounded walnut legs emerging from the upholstered body, this Mid-Century lounge chair has plenty of charm.
Category

Pair of Danish Mid-Century Modern High Back Round Upholstered Armchairs

H 43 in. W 26.25 in. D 28 in.
Pair of Mid-Century Modern Rosewood or Walnut Armchairs Sherpa, Upholstered
By Ib Kofod-Larsen
Located in Stamford, CT
Pair of wooden slat back and seat Mid-Century Modern rosewood or walnut armchairs having been newly upholstered in a plush Sherpa fabric and fully restored so they are ready to sit i...
Category

H 22.40 in. W 29.92 in. D 26.27 in.
Mid-Century Modern Style Wood Armchair with Woven Cane Upholstered in Textile
By Jorge Elizondo
Located in San Miguel de Allende, Guanajuato
Immerse yourself in the depths of nature with woven cane, our mountain pallet colors and the honest wood finishes. Nara lounge chair welcomes you to a world of design and sustainabil...
Category

H 25.59 in. W 24.80 in. D 19.29 in.
Mid-Century Modern Style Wood Armchair with Woven Cane Upholstered in Textile
By Jorge Elizondo
Located in San Miguel de Allende, Guanajuato
This retro-inspired armchair includes an exposed wood frame with angled legs and arms that are unbelievably amazing. The upholstery, is a mix of woven threads in shades of green, and...
Category

H 32 in. W 26 in. D 29 in.
Italian Pair of Carved-Wood Armchairs with Upholstered Seats, Mid-20th Century
Located in Atlanta, GA
An Italian pair of carved wood armchairs with upholstered seats from the mid-20th century. This pair of occasional chairs from Italy have nicely entwined pierced oval-shaped backs, c...
Category

H 34 in. W 34 in. D 31 in.
Midcentury Sycamore Upholstered Armchairs
Located in New York, NY
3 American 1960s sycamore arm chairs having a seat & back upholstered in a light yellow floral pattern with an X-stretcher base and back (PRICED EACH).
Category

H 31 in. W 31 in. D 32 in.
Pair of Mid-Century Modern Teal Seafoam Tweed Newly Upholstered Walnut Armchairs
Located in West Hartford, CT
Architectural gems are these barrel shaped midcentury chairs with new teal/seafoam colored wool fabric. Nothing short of gorgeous. Now, more than ever, home is where the heart is.
Category

H 30 in. W 28 in. D 29 in.
Sculptural Mahogany and Upholstered Armchair
Located in Phoenix, AZ
Sculptural mahogany and upholstered arm chair circa late 1950's. This all original example has stunning flared arms and legs and original black vinyl and brass tack upholstery. Can e...
Category

H 37 in. W 28 in. D 26 in.
Pair of Fully Upholstered Armchairs
Located in Palm Springs, CA
A pair of fully upholstered armchairs. The lounge chairs have been completely restored and reupholstered in Maharam Kvadrat felted wool.
Category

H 28 in. W 26 in. D 31 in.
1980s Czech Upholstered Armchairs, a Pair
By Thonet-Mundus
Located in High Point, NC
Manufactured by TON, a pair of stylish and comfortable armchair in distinct Modernist style from Czech Republic, circa 1980. A timeless approach that still looks contemporary and fre...
Category

H 29.1 in. W 25.6 in. D 28.7 in.
Vintage Sheraton-Style Upholstered Armchair
Located in Great Barrington, MA
The elegant vintage armchair is in the Sheraton style and is upholstered in a striated red and green striped fabric. Fluted wood arms and legs. Solid construction. Measure: Arm 26...
Category

H 35 in. W 24.5 in. D 31 in.
Pair of Italian Modern Iron Upholstered Armchairs
Located in New York, NY
A sleek and very unique pair of Italian modern armchairs, the iron frame supports a wide seat, back and extra wide armrest extending to the back of the chair; newly upholstered in a ...
Category

H 28.75 in. W 37.25 in. D 32 in.
1930s Navy Upholstered Armchair by Jindrich Halabala
By Jindrich Halabala
Located in High Point, NC
Mid-Century Modern upholstered armchair made in the former Czechoslovakia, circa 1930. A timeless approach that still looks contemporary and fresh. Designed by the modernist Jindrich...
Category

H 32.5 in. Dm 27 in.
Mid-Century English Bamboo Barrel Back Arm Chair with Upholstered Seat
By McGuire
Located in Oklahoma City, OK
Take a set in this beautiful antique barrel-back bamboo chair. This chair features an upholstered seat, and woven geometric barrel back. Each of the four legs is affixed to a stretch...
Category

H 47 in. W 26 in. D 31 in.
Pair of Upholstered Armchairs by Jules Leleu
By Jules Leleu
Located in Palm Desert, CA
This stylish pair of armchairs designed by legendary designer and decorator Jules Leleu Reaganism their model number (25) 059 to the inside of the rear leg. Beautiful polished walnut...
Category

How Much is a Upholstered Midcentury Armchair?

The average selling price for an upholstered midcentury armchair at 1stDibs is $3,225, while they’re typically $442 on the low end and $10,950 for the highest priced.

Finding the Right Armchairs for You

Armchairs have run the gamut from prestige to ease and everything in between.

Long before industrial mass production democratized seating, armchairs conveyed status and power. In ancient Egypt, the commoners took stools, while in early Greece, ceremonial chairs of carved marble were designated for nobility. But the high-backed early thrones of yore, elevated and ornate, were merely grandiose iterations of today’s armchairs.

Modern-day armchairs, built with functionality and comfort in mind, are now central to tasks throughout your home. Formal dining armchairs support your guests at a table for a cheery feast, a good drafting chair with a deep seat is parked in front of an easel where you create art and, elsewhere, an ergonomic wonder of sorts positions you at the desk for your 9 to 5.

When placed under just the right lamp where you can lounge comfortably, both elbows resting on the padded supports on each side of you, an upholstered armchair — or a rattan armchair for your light-suffused sunroom — can be the sanctuary where you’ll read for hours. If you’re in the mood for company, your velvet chesterfield armchair is a place to relax and be part of the conversation that swirls around you. Maybe the dialogue is about the beloved Papa Bear chair, a mid-century modern masterpiece from Danish carpenter and furniture maker Hans Wegner, and the wingback’s strong association with the concept of cozying up by the fireplace, which we can trace back to its origins in 1600s-era England, when the seat’s distinctive arm protrusions protected the sitter from the heat of the period’s large fireplaces.

If the fireside armchair chat involves spirited comparisons, your companions will likely probe the merits of antique and vintage armchairs such as Queen Anne armchairs, Victorian armchairs or even Louis XVI armchairs, as well as the pros and cons of restoration versus conservation.

Everyone seems to have a favorite armchair and most people will be all too willing to talk about their beloved design. Whether that’s the unique Favela chair by Brazilian sibling furniture designers Fernando and Humberto Campana, who repurpose everyday objects to artful effect; or Marcel Breuer’s futuristic tubular metal Wassily lounge chair; the functionality-first LC series from Charlotte Perriand, Le Corbusier and Pierre Jeanneret; or the Eames lounge chair of the mid-1950s created by Charles and Ray Eames, there is an iconic armchair for everyone and every purpose. Find yours on 1stDibs right now.