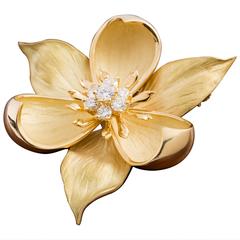 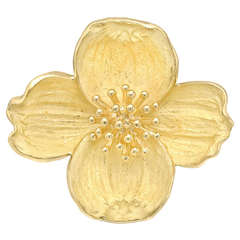 H 29.5 in. Dm 22.5 in. L 29.5 in.
18 Karat Gold Pearl Tiffany & Co. Dogwood Earrings
By Tiffany & Co.
Located in London, GB
A pair of signed Tiffany and Co earrings in the form of dogwood, set with a pearl to the centre. Each earring measures 18mm across. These are set on secure and comfortable post and c...
Category

Free Shipping
W 0.67 in. L 0.67 in.
Signed Tiffany Studios Banded Dogwood Table Lamp
By Tiffany Studios
Located in Petaluma, CA
A very nice example of the beauty of the workmanship created by Tiffany Studios. The light lavender or pink background make for a nice contrast with floral design. Mounted on a richl...
Category

Free Shipping
W 1.5 in.
Tiffany & Co. Dogwood Diamond Gold Flower Earrings
By Tiffany & Co.
Located in Southampton, PA
The Dogwood collection from Tiffany &amp; Co. exudes femininity and class. This pair of earrings from the collection are made of 18K yellow gold and are shaped like gorgeous dogwood ...
Category

Find the exact tiffany gold dogwood you’re shopping for in the variety available on 1stDibs. Each design created in this style — which was crafted with great care and often made from Gold, 18k Gold and Yellow Gold — can elevate any look. Find an antique version now, or shop for 41 vintage or 8 modern creation for a more contemporary example of these cherished accessories. Finding the perfect tiffany gold dogwood may mean sifting through those created during different time periods — you can find an early version that dates to the 19th Century and a newer variation that were made as recently as the 21st Century. Finding an appealing tiffany gold dogwood — no matter the origin — is easy, but Tiffany & Co. each produced a popular version that is worth a look. While most can agree that any tiffany gold dogwood from our collection can easily elevate most outfits, but the choice of a Diamond version from the 16 available is guaranteed to add a special touch to your ensemble. Today, if you’re looking for a brilliant cut version of this piece and are unable to find the perfect match, our selection also includes round cut alternatives. There aren’t many items for men if you’re seeking a tiffany gold dogwood, as most of the options available are for women and unisex.

How Much is a Tiffany Gold Dogwood?

Prices for a tiffany gold dogwood can differ depending upon size, time period and other attributes — at 1stDibs, these accessories begin at $1,200 and can go as high as $42,500, while this accessory, on average, fetches $3,299.

Tiffany & Co. is one of the most prominent purveyors of luxury goods in the United States, and has long been an important arbiter of style in the design of diamond engagement rings. A young Franklin Delano Roosevelt proposed to his future wife, Eleanor, with a Tiffany ring in 1904. Vanderbilts, Whitneys, Astors and members of the Russian imperial family all wore Tiffany & Co. jewels. And Jacqueline Kennedy Onassis preferred Tiffany china for state dinners at the White House.

Although synonymous with luxury today, the firm started out rather modestly. Charles Lewis Tiffany and John B. Young founded it in Connecticut as a “stationery and fancy goods emporium” in 1837, at a time when European imports still dominated the nascent American luxury market. In 1853, Charles Tiffany — who in 1845 had launched the company’s famed catalog, the Blue Book, and with it, the firm’s signature robin’s-egg blue, which he chose for the cover — shifted the focus to fine jewelry. In 1868, Tiffany & Co. gained international recognition when it became the first U.S. firm to win an award for excellence in silverware at the Exposition Universelle in Paris. From then on, it belonged to the pantheon of American luxury brands.

At the start of the Gilded Age, in 1870, Tiffany & Co. opened its flagship store, described as a "palace of jewels" by the New York Times, at 15 Union Square West in Manhattan. Throughout this period, its designs for silver tableware, ceremonial silver, flatware and jewelry were highly sought-after indicators of status and taste. They also won the firm numerous accolades, including the grand prize for silverware at the Paris Exposition of 1878. Among the firm’s glittering creations from this time are masterworks of Art Nouveau jewelry, such as this delicate aquamarine necklace and this lavish plique-à-jour peridot and gold necklace, both circa 1900.

Tiffany is also closely associated with diamonds, even lending its name to one particularly rare and exceptional yellow stone. The firm bought the Tiffany diamond in its raw state from the Kimberley mines of South Africa in 1878. Cut to create a 128.54-carat gem with an unprecedented 82 facets, it is one of the most spectacular examples of a yellow diamond in the world. In a broader sense, Tiffany & Co. helped put diamonds on the map in 1886 by introducing the American marketplace to the solitaire diamond design, which is still among the most popular engagement-ring styles. The trademark Tiffany® Setting raises the stone above the band on six prongs, allowing its facets to catch the light. A lovely recent example is this circa-2000 platinum engagement ring. Displaying a different design and aesthetic (but equally chic) is this exquisite diamond and ruby ring from the 1930s.

The 6 Most Popular Jewelry Houses on 1stdibs

Get to know the history behind the world's most iconic jewelry houses and the fabulous styles they designed.

The Best Ways to Dress for Your Astrological Sign

Makeup and astrology expert Linda Mason dispenses fashion advice for every zodiac sign. Does your wardrobe match your horoscope?