Free Shipping
W 0.13 in. L 6.5 in.
TIFFANY Diamond Bracelet
By Tiffany & Co.
Located in New York, NY
Fine and flexible diamond bracelet set in 18K gold. Made and signed by Tiffany. Has a most beautiful smooth and silky feel. Can be worn alone or paired with another bracelet or wa... 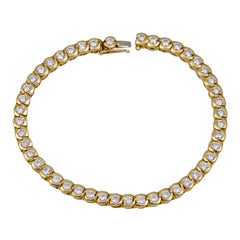 Free Shipping
Tiffany & Co. T Wire Bracelet
By Tiffany & Co.
Located in New York, NY
Brilliant diamonds enhance this bracelet's timeless design. As multifaceted as it is iconic, the Tiffany T collection is a tangible reminder of the connections we feel but can't alwa...
Category

Free Shipping
L 7.25 in.
Tiffany & Co. Burmese Ruby and Diamond Leaf Bracelet
By Tiffany & Co.
Located in New York, NY
Composed of over eight carats of rubies and nearly thirteen carats of diamonds mounted in platinum and gold, this Tiffany & Co. bracelet is a mid-century jewel dating from the 1950s....
Category

Free Shipping
W 1.13 in. L 7 in.
Tiffany & Co. Charm Bracelet with White Diamonds in Platinum
By Tiffany & Co.
Located in Los Angeles, CA
Gorgeous Tiffany & Company charm bracelet with 6 diamond star charms in platinum. A fun addition to any collection. Easy to stack with other bracelets and watch or wear on it's own.
Category

Free Shipping
L 7.25 in.
Tiffany & Co. Diamond Infinity Bracelet in Platinum with Box
By Tiffany & Co.
Located in Scottsdale, AZ
This lovely and delicate Tiffany Infinity chain bracelet will stand the test of time. The timeless infinity symbol is embellished with glittering Tiffany diamonds, while the finely w...
Category

Free Shipping
W .30 in. L 6.5 in.
Tiffany & Co. Platinum Diamond Victoria Bracelet 3.08 Carats
By Tiffany & Co.
Located in London, GB
A stunning platinum diamond bracelet from the Victoria collection by Tiffany & Co. The bracelet is made up of 57 round brilliant cut diamonds and 4 marquise cut diamonds. The diamond...
Category

You are likely to find exactly the tiffany diamond bracelet you’re looking for on 1stDibs, as there is a broad range for sale. Frequently made of Gold, 18k Gold and Platinum, this item was constructed with great care. Find an antique version now, or shop for 538 vintage or 197 modern creation for a more contemporary example of these cherished accessories. Finding the perfect tiffany diamond bracelet may mean sifting through those created during different time periods — you can find an early version that dates to the 18th Century and a newer variation that were made as recently as the 21st Century. As it relates to this specific piece, our collection includes designs that are universally popular, but .5 Carat and 1 Carat carat weights, specifically, are sought with frequency. There have been many well-made iterations of the classic tiffany diamond bracelet over the years, but those made by Tiffany & Co., Jean Schlumberger for Tiffany & Co. and Paloma Picasso for Tiffany & Co. are often thought to be among the most beautiful. See these pages for a round cut iteration of this accessory, while there are also brilliant cut cut and emerald cut cut versions available here, too. When shopping for a tiffany diamond bracelet, you’ll find that there are less available pieces for unisex or men today than there are for women.

How Much is a Tiffany Diamond Bracelet?

Prices for a tiffany diamond bracelet can differ depending upon size, time period and other attributes — at 1stDibs, these accessories begin at $500 and can go as high as $229,483, while this accessory, on average, fetches $10,442.

Tiffany & Co. is one of the most prominent purveyors of luxury goods in the United States, and has long been an important arbiter of style in the design of diamond engagement rings. A young Franklin Delano Roosevelt proposed to his future wife, Eleanor, with a Tiffany ring in 1904. Vanderbilts, Whitneys, Astors and members of the Russian imperial family all wore Tiffany & Co. jewels. And Jacqueline Kennedy Onassis preferred Tiffany china for state dinners at the White House.

Although synonymous with luxury today, the firm started out rather modestly. Charles Lewis Tiffany and John B. Young founded it in Connecticut as a “stationery and fancy goods emporium” in 1837, at a time when European imports still dominated the nascent American luxury market. In 1853, Charles Tiffany — who in 1845 had launched the company’s famed catalog, the Blue Book, and with it, the firm’s signature robin’s-egg blue, which he chose for the cover — shifted the focus to fine jewelry. In 1868, Tiffany & Co. gained international recognition when it became the first U.S. firm to win an award for excellence in silverware at the Exposition Universelle in Paris. From then on, it belonged to the pantheon of American luxury brands.

At the start of the Gilded Age, in 1870, Tiffany & Co. opened its flagship store, described as a "palace of jewels" by the New York Times, at 15 Union Square West in Manhattan. Throughout this period, its designs for silver tableware, ceremonial silver, flatware and jewelry were highly sought-after indicators of status and taste. They also won the firm numerous accolades, including the grand prize for silverware at the Paris Exposition of 1878. Among the firm’s glittering creations from this time are masterworks of Art Nouveau jewelry, such as this delicate aquamarine necklace and this lavish plique-à-jour peridot and gold necklace, both circa 1900.

Tiffany is also closely associated with diamonds, even lending its name to one particularly rare and exceptional yellow stone. The firm bought the Tiffany diamond in its raw state from the Kimberley mines of South Africa in 1878. Cut to create a 128.54-carat gem with an unprecedented 82 facets, it is one of the most spectacular examples of a yellow diamond in the world. In a broader sense, Tiffany & Co. helped put diamonds on the map in 1886 by introducing the American marketplace to the solitaire diamond design, which is still among the most popular engagement-ring styles. The trademark Tiffany® Setting raises the stone above the band on six prongs, allowing its facets to catch the light. A lovely recent example is this circa-2000 platinum engagement ring. Displaying a different design and aesthetic (but equally chic) is this exquisite diamond and ruby ring from the 1930s.