Small Stool
Round Pouf
Purple Ottoman
Red Pouf
Boucle Fabric
Small Pouf
Nickey Kehoe Collection
Hassock Ottoman
View All Popular Ottomans and Poufs Searches
Price
Shipping Options
Sort By
Small Round Ottoman with Gold Finished Base
By The Tailored Home, Jhon Ortiz
Located in Greenwich, CT
Our small round ottoman is the perfect finishing accent that can be used as extra seating. Featuring a round gold finished base, it is upholstered in a navy blue vinyl with pink cut ...
Category

Small Round Ottoman with Gold Finished Base

H 18 in. Dm 15.5 in.
Small Round Ottoman with Navy Vinyl Citrine Tiger Flange Yellow Lacquered Base
By Jhon Ortiz, The Tailored Home
Located in Greenwich, CT
About this piece Small round ottoman with a firm but cushioned seat. Well sized occasional seating, stores easily beneath console tables, easy to lift or slide. Vinyl has a pearlize...
Category

H 18 in. W 15.5 in. D 15.5 in.
Ts Pouffe, Round, Small
By Gubi, Gubi Olsen
Located in Berkeley, CA
Celebrating great functionality with comfort, the TS Pouf in three sizes makes a versatile addition to any living area. The smaller size becomes handy to move around wherever an info...
Category

H 16.5 in. Dm 23.5 in.
Floral Print Small Round Stool
By Jhon Ortiz, The Tailored Home
Located in Greenwich, CT
Small round stool upholstered in a Matthew Williamson woven with a colorful Menagerie print. Made with poplar wood, legs are lacquered in a vibrant blue. Sturdy base with a comfortab...
Category

H 18 in. Dm 16 in.
Trame Small Round Red Pouf with Green Cushion
By Da A
Located in Milan, IT
An exquisite combination of colors and geometric patterns, this striking pouf will make a statement in both indoor and outdoor decors, especially when matched to others from the same...
Category 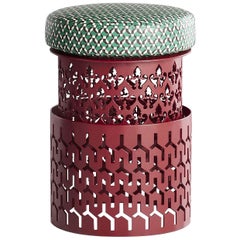 H 17.33 in. W 12.21 in. D 12.21 in.
Trame Small Round Red Pouf with Gray Cushion
By Da A
Located in Milan, IT
A unique piece of contemporary allure, this pouf is the result of skillful traditional craftsmanship merged with contemporary flair. It is composed of two cylindrical pieces crafted ...
Category 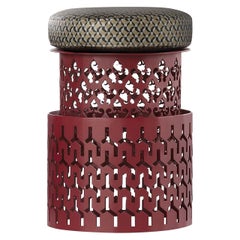 H 17.33 in. W 12.21 in. D 12.21 in.
Trame Small Round Purple Pouf with Gray Cushion
By Da A
Located in Milan, IT
Contemporary and sophisticated, this pouf will be a charming addition to both an indoor or outdoor area. Boasting a dark purple hue, it is entirely crafted of steel. The structure is...
Category

H 17.33 in. W 12.21 in. D 12.21 in.
Limbo Small Round Pouf in Fabric and Leather by Roberto Cavalli Home Interiors
By Roberto Cavalli
Located in Cantu, IT
A compact and versatile pouf characterized by great care for details. Available in different fabrics, it can easily be placed in any setting as a complement to all the pieces in the ...
Category 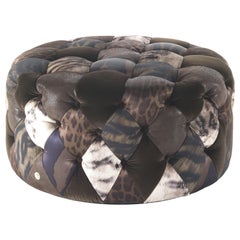 H 16 in. W 17 in. D 17 in.
Nickey Kehoe Collection Small Round Hassock in Vintage Plaid Fabric
Located in Los Angeles, CA
The Nickey Kehoe small round hassock boasts a solid wood frame and beautiful two ring piping details and handles. The piece is one-of-a-kind and upholstered in a vintage French plaid...
Category

Small Round Ottoman For Sale on 1stDibs

How Much is a Small Round Ottoman?

Finding the Right Ottomans and Poufs for You

Antique and vintage ottomans and poufs add comfort and style to any living room, game room, home office or minimalist lounge space. An ottoman is a short seat or footstool that is also often used to store items. A pouf is similar, but it’s typically more petite than an ottoman, usually without the storage space inside.

When one thinks of the Ottoman Empire, it’s easy to overlook the iconic seat named for the region. The ottoman — originally an upholstered seat or small bench without a back or arms — was a family’s main seating furniture, a way to merge floor seating with cushions and mats. It wasn’t until they were brought to Europe from Turkey, during the 18th century, that it became popular to join ottomans with other pieces of furniture, such as at the base of a chair. Eventually, these footrests were transformed into storage furnishings to organize quilts and blankets or other textiles. Furniture makers crafted their ottomans with lids that revealed a hidden cupboard, which rendered them both comfortable and practical.

Poufs, which appeared in France during the 1840s, are also of the low-platform seating variety. These versatile furnishings have been made available in all manner of shapes and sizes over time, and depending upon their firmness can be used as a side table should an occasion call for an extra one. However, your average ottoman is almost always firmer than a pouf, and even if the plush pouf in your living room feels sturdy, it’s probably not the best surface for your early-evening cocktail.

Both ottomans and poufs can help create an inviting and warm atmosphere in your living space. For the smaller rooms that are characterized by a casual feel, a shaggy or woven wool pouf might be a better choice, as it’s likely to be more compact and floor-cushion-like than an ottoman. The latter are often larger and more table-like and are comparatively a good fit for a more formal room such as a library or a study. Today, you might find that an ottoman works well in your bedroom, where there isn’t room for a sofa, or perhaps it can serve as a reliable perch in front of your vintage vanity table.

Whatever your seating needs are, find a collection of antique, new and vintage ottomans and poufs in varying styles on 1stDibs that include neoclassical, Industrial and mid-century modern. From the bright colors and bold patterns deployed by Milan-born designer Lorenza Bozzoli to the classy leather furnishings created at family-run Brooklyn, New York, atelier Moses Nadel, there is an endless range of these lovable low stools that merge seamlessly with most decor.

If anyone is brave, humble and adept enough to recolor these mid-century masterpieces, it’s Ilse Crawford. Here, she gives us the details on her five earthy paint choices and tells us how she feels about design collaborations.