H 20 in. W 30 in.
Daniel Gainey - Slim Aarons, 20th century photography, Arizona, Arabian, Wine
By Slim Aarons
Located in Brighton, GB
Please be aware that the US recently imposed an import duty on photographs printed in the last 20 years which may apply if you are purchasing and importing this to the US. Currency ...
Category 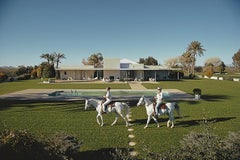 H 16 in. W 20 in.
Poolside in Arizona - Slim Aarons, 20th Century, Modern architecture, Pool, Luxe
By Slim Aarons
Located in Brighton, GB
Please be aware that the US recently imposed an import duty on photographs printed in the last 20 years which may apply if you are purchasing and importing this to the US. Currency ...
Category

You are likely to find exactly the slim aarons arizona you’re looking for on 1stDibs, as there is a broad range for sale. Adding a slim aarons arizona to a room that is mostly decorated in warm neutral tones can yield a welcome change — find a piece on 1stDibs that incorporates elements of black, blue, gray and more. Artworks like these of any era or style can make for thoughtful decor in any space, but a selection from our variety of those made in digital print, lambda print and laser print can add an especially memorable touch. A large slim aarons arizona can prove too dominant for some spaces — a smaller slim aarons arizona, measuring 10 high and 12 wide, may better suit your needs.

How Much is a Slim Aarons Arizona?

The price for an artwork of this kind can differ depending upon size, time period and other attributes — a slim aarons arizona in our inventory may begin at $1,320 and can go as high as $3,950, while the average can fetch as much as $3,000.

American photographer Slim Aarons captured the 20th century’s international jet set — U.S. socialites, European royalty, Hollywood stars — at play in sun-kissed locales like Monaco, Saint-Tropez and Palm Beach, as well as other luxurious settings around the globe. Committed to eschewing makeup and artificial lighting, Aarons created images that are at once candid and polished, combining the relaxed posture of his subjects, who trusted him to document their lives, with the visual sharpness of a seasoned art director. Having gotten his start taking pictures for the U.S. military magazine Yank during World War II, he contributed over the course of his career to Life, Town and Country and Holiday magazines and published several books.

Aarons was born in Manhattan in 1916. He joined the army at 18, shooting military maneuvers at West Point before serving as a combat photographer, for which he was awarded a Purple Heart. After the war, he moved to California and began snapping socialites and movie stars. In the 1950s, he opened a bureau for Life magazine in Rome, where he took pictures capturing the postwar scene. Aarons was always able to win the trust of his elite subjects, who saw him as close to a peer, rather than a paparazzo. In a 2002 interview with The Independent, he remarked, ''I knew everyone. They would invite me to one of their parties because they knew I wouldn't hurt them. I was one of them.'' This access allowed Aarons to document the rich and famous with their guard down, reading newspapers and magazines, talking on the phone, relaxing by the pool, and chatting with friends. The 1957 photograph The Kings of Hollywood, for example, which won him wide acclaim, shows Clark Gable, Van Heflin, Gary Cooper and Jimmy Stewart laughing together as they celebrate New Year’s Eve.

Many of Aarons’s best-known images involve games and sports. In the 1972 Poolside Backgammon, two young women play the board game of the title against the backdrop of a majestic Acapulco estate. In 1958’s Cannes Watersports, a couple attempts to glide across the Golfe de la Napoule on Jet Skis, one expertly and one hanging on for dear life. And in Penthouse Pool, shot in Athens in 1961, a young woman wearing a yellow bathing cap smiles coyly at the camera, surrounded by friends and brightly colored seat cushions, with the Acropolis faintly visible in the background. Among Aarons’s books are 1974’s A Wonderful Time: An Intimate Portrait of the Good Life, and its 2003 sequel, Once Upon a Time. His final book, A Place in the Sun, was published in 2005, one year before his death.

Who Are the Most Popular Artists on 1stdibs?

Learn the stories of some of the world's most recognizable artworks and their makers.