H 36 in. W 35 in. D 35 in.
Rustic Style Antler Chandelier
Located in New York, NY
Rustic style vintage chandelier with genuine antlers and six lights. The piece was made during the early 20th century, possibly in France, and has an elegant natural patina. In great...
Category

H 32 in. Dm 59 in.
Rustic Antler Lamp with Deer Antlers
Located in Berghuelen, DE
A nice antler chandelier made of 4 deer antlers, with 4 spouts. Manufactured, circa 1930. With hand forged iron chains, later electrified, function not tested, without shades. Mea...
Category

H 28.75 in. Dm 29.53 in.
Rustic French Five-Light Antler Chandelier, circa 1950
Located in Antwerp, BE
Gorgeous vintage French five-light authentic antler chandelier. This awesome chandelier would be fantastic in most any room of the home.
Category

H 31.5 in. Dm 47.25 in.
Classy Antique Black Forest Antler Chandelier
Located in Berghuelen, DE
A large cabin style antler chandelier made of several turned deer and fallow deer antlers with 4 spouts for candles and one electrified spout. Manufactured in Germany, circa 1920. ...
Category

H 24 in. W 30 in. D 30 in.
Large Antler Chandelier with Forged Iron Suspension
Located in Berghuelen, DE
A beautiful filigree worked forged iron chandelier with 4 large elk antlers. Executed, circa 1950 with 20 spouts for candles, not electrified. Please contact us for an individual sh...
Category

H 23.63 in. Dm 51.19 in.
Rustic Black Forest Antler Chandelier, circa 1900
Located in Berghuelen, DE
Antique rustic antler chandelier made of original deer and Virginia deer antlers. Executed, circa 1900. A great accessory for your rustic home. Original cabling has to be renewed. ...
Category

H 26.78 in. Dm 24.41 in.
Great Bronze and Iron Chandelier - Snakes and Antler Design, circa 1870
Located in Berghuelen, DE
A gorgeous chandelier from the manor Lucklum in Germany with 8 bronze candle spouts in the shape of snakes and 4 large antlers. Made of cast iron and bronze. A very heavy chandelier,...
Category

Great Bronze and Iron Chandelier - Snakes and Antler Design, circa 1870

H 51.19 in. Dm 43.31 in.
Rustic Chic Antler Chandelier
Located in Hopewell, NJ
Wonderful overlapping array of antlers create a sculptural focal point in a chandelier. Ten bulbs, up to 60 each.
Category 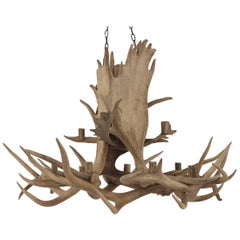 H 24 in. W 36 in. D 24 in.
shapely antique antler chandelier
Located in Berghuelen, DE
a shapely chandelier made of several deer antlers. 8 spouts in the style of candles. executed ca. 1930.
Category

H 36 in. Dm 41 in.
Fantastic Deer and Moose Antler Chandelier
Located in Hopewell, NJ
Large beautifully handcrafted rustic antler chandelier, purchased from a collector who actually got the antlers while on safari in South Africa.
Category

H 20 in. W 28 in. D 28 in.
Large Antique Antler Chandelier with Candles
Located in Berghuelen, DE
A very large chandelier made of several large antlers from the stag. Eight spouts for candles made of turned antler pieces. Executed circa 1920.
Category

H 29.53 in. W 39.38 in. D 39.38 in.
Diminutive Pair of Deer Antler Chandeliers
Located in Lambertville, NJ
A pair of four-light deer antler chandeliers with birch wood centers. Each one is formed from natural deer antlers and now electrified.
Category

H 15 in. W 17 in. D 17 in.
3 Light Shed Antler Chandelier
Located in Houston, TX
Unusual hand-made shed antler chandelier has been newly wired in the US. It would be nice for a kitchen island.
Category

H 38.5 in. W 22 in. D 22 in.
Museal Hand-Carved Antler Chandelier
Located in Berghuelen, DE
A rare antique chandelier made of multiple pieces of horn. several pieces carved. from a noble estate in south Germany. Date of origin circa 1860. The pair of deers in the center rep...
Category

Elaborate Antler Chandelier with Eight Spouts
Located in Berghuelen, DE
An elaborate chandelier made of several large antlers from the deer. Eight lamp fittings in the style of candles. Executed in Germany, circa 1930.
Category

H 25.6 in. Dm 47.25 in.
1940s Naturally Shed Antlers Chandelier with 16 Lights, Wired for the US
Located in Atlanta, GA
A rustic continental vintage sixteen-light tiered antler chandelier from the mid-20th century. This light fixture was made of naturally shed antlers in Europe during the 1940s. The t...
Category

1940s Naturally Shed Antlers Chandelier with 16 Lights, Wired for the US

H 44 in. Dm 42 in.
Naturally Shed 24-Light Antler Chandelier from the 1940s, Rewired for the US
Located in Atlanta, GA
A 24-light continental four-tiered antler rustic chandelier, from the mid 20th century. This light fixture was made of naturally shed antlers in Europe during the 1940s. The tall and...
Category

Naturally Shed 24-Light Antler Chandelier from the 1940s, Rewired for the US

H 24 in. Dm 48 in.
Antique Carved Wood Lusterweibchen with Real Antlers
Located in Berghuelen, DE
An antique antler chandelier a hand-carved and painted noble lady statue - named lusterweibchen or lüsterweibchen - fixed on a large original antler trophy. On the base a blazon wit...
Category

H 31.5 in. W 30.71 in. D 31.5 in.
Antique Carved Wood Lusterweibchen "Beauty of Ulm"
Located in Berghuelen, DE
An antique antler chandelier, a hand-carved and painted lady statue-named lusterweibchen or lüsterweibchen-fixed on a large original antler trophy. The archetype of this lusterweibc...
Category

H 39.38 in. W 42.52 in. D 31.5 in.
Lovely Antique Lusterweibchen of a Medieval Lady, circa 1920
Located in Berghuelen, DE
An antique lusterweibchen statue of a medieval lady - made of hand-carved and painted wood - mounted on a pair of original deer antlers with two spouts on the back of the figure (add...
Category

Lovely Antique Lusterweibchen of a Medieval Lady, circa 1920

How Much are Rustic Antler Chandeliers?

Rustic antler chandeliers can differ in price owing to various characteristics — the average selling price at 1stDibs is $4,417, while the lowest priced sells for $425 and the highest can go for as much as $12,700.

Finding the Right Chandeliers Pendant Lights for You

Chandeliers — simple in form, inspired by candelabras and originally made of wood or iron — first made an appearance in early churches. For those wealthy enough to afford them for their homes in the medieval period, a chandelier's suspended lights likely exuded imminent danger, as lit candles served as the light source for fixtures of the era. Things have thankfully changed since then.

While gas lighting during the late 18th century represented an upgrade for chandeliers — and gas lamps would long inspire Danish architect and pioneering modernist lighting designer Poul Henningsen — it would eventually be replaced with the familiar electric lighting of today.

The key difference between a pendant and a chandelier is that a pendant incorporates only a single bulb into its design. Don’t mistake this for simplicity, however. An Art Deco–styled homage to Sputnik from Murano glass artisans Giovanni Dalla Fina (note: there is more than one lighting fixture named for the iconic mid-century-era satellite — see Gino Sarfatti’s design too), with handcrafted decorative elements supported by a chrome frame, is just one stunning example of the elaborate engineering that can be incorporated into every component of a chandelier.

Chandeliers have evolved over time, but their classic elegance has remained unchanged. Not only does the right chandelier prove stunning, but it can also offer a certain sense of practicality. These fixtures can easily illuminate an entire space, while their elevated position prevents them from creating glare or straining one’s eyes. Certain materials, like glass, can complement naturally lit settings without stealing the show. Brass, on the other hand, can introduce an alluring, warm glow. While LEDs have earned a bad reputation for their perceived harsh bluish lights and a loss of brightness over their life span, the right design choices can help harness their lighting potential and create the perfect mood. A careful approach to lighting can transform your room into a peaceful and cozy nook, ideal for napping, reading or working.

For midsize spaces, a wall light or sconce can pull the room together and get the lighting job done. Perforated steel rings underneath five bands of handspun aluminum support a rich diffusion of light within Alvar Aalto's Beehive pendant light, but if you’re looking to brighten a more modest room, perhaps a minimalist solution is what you’re after. The mid-century modern furniture designer Charlotte Perriand devised her CP-1 wall lamps in the 1960s, in which a repositioning of sheet-metal plates can redirect light as needed.

The versatility and variability of these lighting staples mean that, when it comes to finding something like the perfect chandelier, you’ll never be left hanging. From the whimsical — like the work of Beau & Bien’s Sylvie Maréchal, frequently inspired by her dreams — to the classic beauty of Paul Ferrante's fixtures, there is a style for every room. With designs for pendants and chandeliers across eras, colors and materials, you’ll never run out of options to explore on 1stDibs.

Questions About Rustic Antler Chandeliers
Prices for most rustic antler chandeliers on 1stdibs are negotiable. You’ll see a "Make an Offer" button on the item details page, indicating that the seller is willing to consider a lower price. It’s not uncommon for customers to get 15–25% off the list price after negotiating. See our tips for negotiating like a pro.
Only experienced, professional sellers who have applied and been thoroughly vetted by our team of experts can sell rustic antler chandeliers and other quality items on our site. Learn more about becoming a 1stdibs seller.
The 1stdibs Buyer Protection Guarantee provides coverage for qualified purchases in the unlikely event that the item arrives not as described or is damaged. We’ll work with you and the seller to find a resolution, ensuring your satisfaction. View details
We have partnerships with the world's best shipping providers to facilitate seamless and fully-insured delivery from the seller's location directly to you, wherever you are in the world. Our logistics team is comprised of dedicated members who arrange all the details with our partners, servicing and supporting all shipments. Learn more about shipping on 1stdibs.
For your convenience, we offer multiple payment methods, including all major credit cards and PayPal. For many purchases we also offer financing options or wire transfer. Learn more about payment options on 1stdibs.