Painting of a Woman, Mid-Century, Black and White, Modern Art, circa 1950

H 50.75 in. W 1 in. D 38.5 in.
Abstract Jay Milder, 1965 Black and White Gouache on Paper
Located in Plymouth, MA
Dramatic abstract gouache on paper by listed Am. artist Jay Milder (b. 1934) painted in 1964 in black and white. Signed and dated lower left. In excellent condition. Silver edged bla...
Category 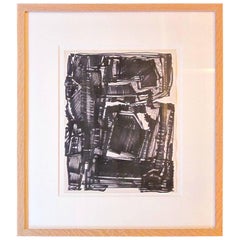 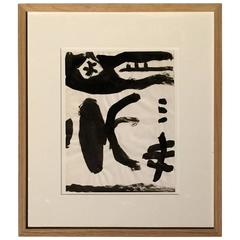 H 19.75 in. W 29.75 in. D 1.5 in.
Walter Gaudnek Black and White Painting
By Walter Gaudnek
Located in Phoenix, AZ
Walter Gaudnek black and white painting from 1972. Gaudnek has exhibited internationally in both galleries and museums including The Museum of Modern Art in 1960. His work mixes symb...
Category

H 44 in. W 33 in. D 1.5 in.
Mid-Century Modern Black and White Geometric Gordon Newton Special Edition
Located in Keego Harbor, MI
Dimensions: Frame 33 x 44" Art: 26 x 36. Gordon Newton did a special edition of his oil and stick pieces in collaboration with a project in Detroit. Very rare to find prints by New...
Category

H 44 in. W 33 in. D 1.5 in.
Patrick Mather Hard-Edge Black and White Acrylic Painting, Pair
Located in Phoenix, AZ
This delightfully bold pair of hard-edge acrylic on board paintings titled "Key" and "Complex" from 1971 by artist Patrick Mather feature architectural interlocking black and white b...
Category

H 21 in. W 18 in. D 1 in.
Black and White Op Art Oil on Canvas
By SHEI
Located in National City, CA
For your consideration a vintage oil in canvas painitng. Black in white with op art. Signed in lower left corner. &quot;SHEI&quot;. No information on the artist. Painting measures ...
Category

H 49 in. W 37 in. D 2.38 in.
Black and White Splat on Emerald Gouache by Honora Berg
Located in Pasadena, CA
An intriguing black and white splat scene with a deep, gradient emerald background. Signed Honora Berg. Honora Berg was an abstract painter who moved from New York to San Francisc...
Category

Black and White Splat on Emerald Gouache by Honora Berg

H 24 in. W 22 in. L 24 in.
Large Black and White Abstract Painting by Guillermo Calles
By Franz Kline
Located in New York, NY
Large black and white oil on canvas abstract painting by Philadelphia artist, Guillermo Calles. These pieces have wonderful texture and composition. See this item in our private ...
Category

H 40 in. W 40 in. D 2 in.
Clay Walker Painting 1957 American Modern Painter Gauche Black and White
By Clay Walker
Located in St. Louis, MO
Beautiful Gauche painting by the recently discovered Mid-Century Modern American painter Clay Walker. Painting has no defects or issues to speak of. Painted on canvas and framed with...
Category

H 48 in. W 36 in. D 2 in.
Mirror with Black and White Abstract Painting in Brass Frame, 1950s
Located in Antwerp, BE
Vintage mid-century mirror. Brass frame with a black and silver abstracted painted motif on the glass. Glass is in excellent condition with no fogging. Dimensions: 43 W x 80 H, 2 D cm.
Category

Midcentury Black And White Painting For Sale on 1stDibs

How Much is a Midcentury Black And White Painting?

Prices for a midcentury black and white painting can differ depending upon size, time period and other attributes — at 1stDibs, they begin at $360 and can go as high as $8,000, while the average can fetch as much as $2,575.

As the collection of vintage mid-century modern American furniture on 1stDibs demonstrates, this period saw one of the most delightful and dramatic flowerings of creativity in design history.