Dm 51.19 in.
Grey Handmade Wool Rug with High/Low Pile from Inkblot Collection by Gordian
By Gordian Rugs
Located in New York, NY
Gordian’s Inkblots collection draws its influence from the famous Rorschach testing method which seeks to provide awareness and understanding of our identity and personal fulfilment....
Category 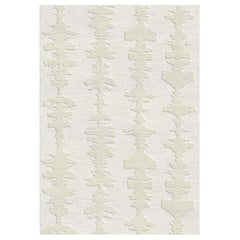 W 96 in. L 120 in.
Moroccan Azilal Rug, Colorful Motif, High Pile
Located in New York, NY
On a dark brown latticed ivory field, a central square is centred in dark brown with an angular human figure, quasi-date and geometric motif, all in tones of yellow, red, green and i...
Category

W 61 in. L 93 in.
Vintage Hand Knotted Turkish High and Low Pile Rug with a Medallion Design
Located in Philadelphia, PA
A vintage hand knotted Turkish rug from the 1960s featuring a round polygonal medallion filled with floral motifs. The medallion is surrounded all around with an abundance of floweri...
Category

W 34 in. L 73 in.
1950s Vintage Midcentury Rug Orange Brown Diamond Pattern High Pile Runner
Located in Long Island City, NY
Handmade in hand knotted wool circa 1950-1960, this midcentury rug is a rare selection from a series of antique and vintage high pile runners our principal Josh has discovered from I...
Category

W 36.62 in. L 68.12 in.
Colorful Geometric high and low pile Rug. 100% Wool. Custom Options Available
Located in Philadelphia, PA
A large Anatolian rug with colorful geometric boxes on an cream background. 100% wool. The cream ground is hand-woven (kilim) and the patterns are hand-knotted. Even low pile through...
Category

W 89 in. L 115 in.
Modernist Red Multi-Color High Pile Large Rya Rug by Desso, 1970's
By Desso
Located in The Hague, NL
This rug is a great example of 1970s Pop Art interior. Made in high quality weaving technique. This high quality Rya rug was designed in the 1970s and manufactured by DESSO in the Ne...
Category

W 82 in. L 92 in.
6.7x9.7 Ft Black and Gray Over-Dyed Vintage Rug with High and Low Pile
Located in Philadelphia, PA
A midcentury handmade Turkish rug overdyed in black color and with high and low pile creating a beautiful engraved look. Available as seen or in various other designs and colors on r...
Category

W 81 in. L 122 in.
Hand Knotted Antique Rug Red Moroccan Style Runner High Pile and Diamond Pattern
Located in Long Island City, NY
Hand knotted in wool originating circa 1910-1920, this antique runner hails from a select line made in Iraq, one of the only pieces in our collection hailing from this region. Paying...
Category

W 106 in. L 154 in.
Vintage Danish Modern High Pile Brown and Blue Wool Rug with White Cat
Located in Vienna, AT
Charming and very decorative design carpet in wonderful shades of brown and blue with a sitting white cat. In beautiful original condition without damages. It is made from wool in D...
Category

Find many varieties of an authentic high pile rug available at 1stDibs. Each high pile rug for sale was constructed with extraordinary care, often using fabric, wool and acrylic. If you’re shopping for a high pile rug, we have 129 options in-stock, while there are 15 modern editions to choose from as well. You’ve searched high and low for the perfect high pile rug — we have versions that date back to the 20th Century alongside those produced as recently as the 21st Century are available. Each high pile rug bearing Mid-Century Modern, Modern or Arts and Crafts hallmarks is very popular. A well-made high pile rug has long been a part of the offerings for many furniture designers and manufacturers, but those produced by Desso, Ege Rya and Ege Tæpper are consistently popular.

How Much is a High Pile Rug?