H 29.5 in. W 20.5 in. D 20.5 in.
Gorgeous Herman Miller Eames Rosewood Lounge Chair and Ottoman
By Herman Miller, Charles and Ray Eames
Located in Brooklyn, NY
One of the most beautiful Eames lounge chair/ottoman sets we have ever encountered. Sweeping and beautiful Brazilian rosewood grains. Original leather in good condition. No missing b...
Category

H 32 in. W 33 in. D 35 in.
Rare Herman Miller Eames Round Dining Table in Rosewood
By Charles and Ray Eames, Herman Miller
Located in Brooklyn, NY
This is the biggest Eames rosewood table we have ever had. 60 inches in diameter, big enough for friends and family. Executed in stunning rosewood with bold coloring and vibrant figu...
Category

H 29 in. W 60 in. D 60 in.
Herman Miller Eames Conference or Dining Table in Brazilian Rosewood
By Herman Miller, Charles and Ray Eames
Located in Brooklyn, NY
Gorgeous Eames racetrack style table by Herman Miller. Aluminum segmented base and executed in Brazilian rosewood. This was a custom order at the time, and since it is now illegal to...
Category

H 28.75 in. W 35.75 in. D 35.75 in.
Eames Round Rosewood Table with Original Accessories
By Charles and Ray Eames, Herman Miller
Located in Atlanta, GA
A scarce 60" round rosewood table, complete with original Herman Miller tablecloths and 2-piece folding tabletop protector. Designed by Charles & Ray Eames as part of their Aluminum ...
Category

Exceptional Chair and Ottoman by Charles Eames for Herman Miller

H 32 in. W 32.75 in. D 32.75 in.
Rare 1956 First Year Production Eames Lounge Chair with Spinning Ottoman
By Herman Miller, Charles and Ray Eames
Located in Los Angeles, CA
A rare 1956 first year production of the iconic 670/671 lounge chair with spinning ottoman by Ray and Charles Eames for Herman Miller. The spinning ottoman was only made during the f...
Category

H 32 in. W 32.75 in. D 32 in.
Rare Eames Rosewood Dining table for Herman Miller
By Charles and Ray Eames, Herman Miller
Located in Brooklyn, NY
Gorgeous and supremely rare Herman Miller 36 inch dining table in Brazilian rosewood (this wood was discontinued in 1993 due to environmental regulations). The grains are absolutely ...
Category

H 32.25 in. W 33 in. D 35 in.
Eames Rosewood Lounge Chair and Ottoman by Herman Miller, circa 1970
By Charles Eames, Herman Miller
Located in Southampton, NJ
A Generation 2-3 Eames lounge chair and ottoman in Brazilian Rosewood having black leather cushions. Beautiful overall condition having been treated regularly and well maintained.
Category

Eames Rosewood Lounge Chair and Ottoman by Herman Miller, circa 1970

How Much is a Herman Miller Eames Rosewood?

Prices for a piece of herman miller eames rosewood can differ depending upon size, time period and other attributes — at 1stDibs, they begin at $650 and can go as high as $18,000, while the average can fetch as much as $5,824.

Finding the Right Lounge Chairs for You

While this specific seating is known to all for its comfort and familiar form, the history of how your favorite antique, new or vintage lounge chair came to be is slightly more ambiguous.

Although there are rare armchairs dating back as far as the 17th century, some believe that origins of the first official “lounge chair” are tied to Hungarian modernist designer-architect Marcel Breuer. Sure, Breuer wasn’t exactly reinventing the wheel when he introduced the Wassily lounge chair in 1925, but his recliner was indeed revolutionary for its integration of bent tubular steel.

Officially, a lounge chair is simply defined as a “comfortable armchair,” which allows for the shape and material of the furnishings to be extremely diverse. Whether or not chaise longues make the cut for this category is a matter of frequent debate.

The Eames lounge chair, on the other hand, has come to define somewhat of a universal perception of what a lounge chair can be. Introduced in 1956, the chair (and its partner in cozy, the ottoman) quickly became staples in television shows, prestigious office buildings and sumptuous living rooms. Venerable American designers Charles and Ray Eames intended for it to be the peak of luxury, which they knew meant taking furniture to the next level of style and comfort. Their chair inspired many modern interpretations of the lounge — as well as numerous copies.

On 1stDibs, find a broad range of authentic lounge chairs that includes everything from antique Victorian-era seating to vintage mid-century modern lounge-chair options by craftsmen such as Hans Wegner to contemporary choices from today’s innovative designers. 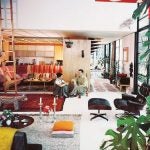 Herman Miller Got Its Start in the Office, but Its Legacy Is in the Home

The brand that turned Charles and Ray Eames, Isamu Noguchi and George Nelson into mid-century household names is just as relevant today as it was six decades ago.