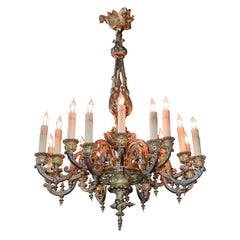 H 25.5 in. Dm 23.88 in.
French Gilt Bronze Chandelier in the Regence Style
Located in London, GB
This beautiful chandelier has been cast in gilt bronze, designed to reflect the light to maximum effect. It has four lights, which have foliate-form circular drip pans, and sit at th...
Category 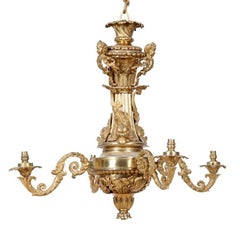 H 29.5 in. Dm 27.9 in.
Antique French Gilt Bronze Chandelier, Basket of Flowers
Located in Los Angeles, CA
A large French gilt bronze neoclassical style 17-light chandelier in a form of reticulated basket of flowers mounted with total of 23 arms in the form of tulips, circa 1900. Me...
Category

H 29 in. Dm 36 in.
French Gilt Bronze Chandelier, Six-Arm Louis XV Style
Located in Vero Beach, FL
The six arms are in the form of swirling acanthus leaves in the exuberant Louis XV style. This finely chased chandelier was made in France, circa 1870. A high quality bronze casting....
Category

H 19 in. Dm 11 in.
19th Century French Gilt Bronze Chandelier with Porcelain Flowers
Located in Dallas, TX
We have pleasure to present you with some of the finest of La Belle Epoque This is a late 19th century French gilt bronze six branch chandelier draped and surrounded by porcelain fl...
Category

H 21 in. Dm 22 in.
Antique French Gilt Bronze Chandelier with Six Arms and Red Candleslips
Located in Fayetteville, AR
This elegant crystal chandelier is beautifully detailed. Its six arms are heavily draped with pendalogues and spears while its central crystal column leads to two more tiers with lar...
Category

H 21.5 in. Dm 16.5 in.
Large French Gilt Bronze Neoclassical Chandelier
Located in London, GB
A large French Second Empire, six-branch chandelier in gilt bronze, with neoclassical features and a cut-glass dish to the base. Of fine quality. Newly electrified.
Category

H 35 in. W 26 in. D 26 in.
Antique French Gilt Bronze Three-Branch Chandelier
Located in London, GB
Designed during the sumptuous Belle Époque, this gilt bronze chandelier demonstrates the very best of the period. The chandelier is supported by a central highly ornate gilt bronz...
Category

How Much are French Gilt Bronze Chandelier?

Prices for a french gilt bronze chandelier can differ depending upon size, time period and other attributes — at 1stDibs, they begin at $550 and can go as high as $592,119, while the average can fetch as much as $10,479.

Finding the Right Chandeliers Pendant Lights for You

Chandeliers — simple in form, inspired by candelabras and originally made of wood or iron — first made an appearance in early churches. For those wealthy enough to afford them for their homes in the medieval period, a chandelier's suspended lights likely exuded imminent danger, as lit candles served as the light source for fixtures of the era. Things have thankfully changed since then.

While gas lighting during the late 18th century represented an upgrade for chandeliers — and gas lamps would long inspire Danish architect and pioneering modernist lighting designer Poul Henningsen — it would eventually be replaced with the familiar electric lighting of today.

The key difference between a pendant and a chandelier is that a pendant incorporates only a single bulb into its design. Don’t mistake this for simplicity, however. An Art Deco–styled homage to Sputnik from Murano glass artisans Giovanni Dalla Fina (note: there is more than one lighting fixture named for the iconic mid-century-era satellite — see Gino Sarfatti’s design too), with handcrafted decorative elements supported by a chrome frame, is just one stunning example of the elaborate engineering that can be incorporated into every component of a chandelier.

Chandeliers have evolved over time, but their classic elegance has remained unchanged. Not only does the right chandelier prove stunning, but it can also offer a certain sense of practicality. These fixtures can easily illuminate an entire space, while their elevated position prevents them from creating glare or straining one’s eyes. Certain materials, like glass, can complement naturally lit settings without stealing the show. Brass, on the other hand, can introduce an alluring, warm glow. While LEDs have earned a bad reputation for their perceived harsh bluish lights and a loss of brightness over their life span, the right design choices can help harness their lighting potential and create the perfect mood. A careful approach to lighting can transform your room into a peaceful and cozy nook, ideal for napping, reading or working.

For midsize spaces, a wall light or sconce can pull the room together and get the lighting job done. Perforated steel rings underneath five bands of handspun aluminum support a rich diffusion of light within Alvar Aalto's Beehive pendant light, but if you’re looking to brighten a more modest room, perhaps a minimalist solution is what you’re after. The mid-century modern furniture designer Charlotte Perriand devised her CP-1 wall lamps in the 1960s, in which a repositioning of sheet-metal plates can redirect light as needed.

The versatility and variability of these lighting staples mean that, when it comes to finding something like the perfect chandelier, you’ll never be left hanging. From the whimsical — like the work of Beau & Bien’s Sylvie Maréchal, frequently inspired by her dreams — to the classic beauty of Paul Ferrante's fixtures, there is a style for every room. With designs for pendants and chandeliers across eras, colors and materials, you’ll never run out of options to explore on 1stDibs.

A Tale of Two Sputnik Chandeliers

This pair of iconic 20th-century light fixtures with the same name have two very different backgrounds.

Barovier&Toso Has Been Making Murano Magic for 700-Plus Years