Price
Shipping Options
Sort By
Antique Four Poster Bed
Located in Gloucestershire, GB
Antique four poster bed, the front posts being George III period which are turned with reeding, acanthus decoration and finishing in square sections at the base. The frame is later. ...
Category

H 87 in. W 89 in. D 57 in.
Mahogany Four Poster Bed
Located in Gloucestershire, GB
Antique four poster bed with turned front columns made of really splendid Cuban mahogany. The front posts are also reeded and have rope twist which was popular following the British ...
Category 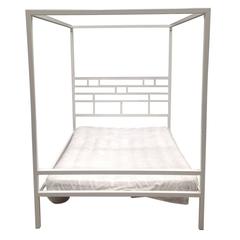 H 98 in. W 72 in. D 84 in.
Exceptional Four Poster Early Victorian Rococo Bed
By Alexander Roux
Located in San Rafael, CA
This most impressive four-poster bed will make any room into a virtual museum. The graceful lines and finely carved detail are top of the line. The Rococo style is one of the most so...
Category

H 93 in. W 88 in. D 56 in.
Antique Four-Poster Bed in Blue M4P31
Located in Wrexham, GB
A mid-Victorian four poster bedstead with scroll design panels, brass side-drops on the posts, brass knobs and collars and straight canopy rails finished in blue (Color can be change...
Category

H 85 in. W 60 in. D 84 in.
Cast Iron Antique Four-Poster Bed M4P32
Located in Wrexham, GB
A 6ft wide cast iron antique four-poster bed with central brass casting in a sunflower design (Colour can be changed to any of your choice). Originally manufactured in Birmingham,...
Category

Plume Four-Poster Bed in the manner of Thomas Chippendale

H 83 in. W 54 in. D 78.75 in.
St. Thomas Regency Four Poster Mahogany Queen Bed, 19th C.
Located in Charleston, SC
This stylized Regency Caribbean bed was created in early half of the 19th century, circa 1820 and features a carved headboard with zoomorphic forms. The bed has four turned and reede...
Category

H 87 in. W 58 in. D 88.75 in.
Highly Carved Classical Mahogany Four Poster Bed, Massachusetts, circa 1820
Located in Providence, RI
Provenance: Ansel Gibbs (b.1773 - d.1835) of Fairhaven, MA: Shipmaster, Merchant and Justice of the Peace. Deaccessioned from New Bedford Whaling Museum. This bed is composed of ...
Category

H 92 in. W 60 in. D 82 in.
18th Century Irish Mahogany King Size Four Poster Bed
Located in Charleston, SC
This mahogany bed was crafted in the mid to late 18th century during the Queen Anne/Chippendale period. It was originally constructed as a full but then later converted to a king-siz...
Category

H 82 in. W 60 in. D 80 in.
Early 19th Century Charleston Mahogany Four-Poster Bed with Tester
Located in Charleston, SC
This classical four-poster bed was made in Charleston, South Carolina, in the first quarter of the 19th century. This piece features carving on the foot posts in the form of reeded p...
Category

H 63.5 in. W 65 in. D 88 in.
Traditional Stained Tiger Maple Carved Four Poster Bed with a Paneled Headboard
Located in Tiverton, RI
The Portsmouth pineapple bed is a symbol of hospitality, the intricately hand carved pineapple posts add whimsy to an already dramatic piece. This is a Classic canopy bed available w...
Category

H 92 in. W 64.75 in. D 87.75 in.
St. Croix Regency Four Poster Mahogany Queen Bed, 19th Century
Located in Charleston, SC
This elegant West Indies poster bed was made in the Caribbean Island of Saint Croix. The Headboard is solid mahogany and carved in the Rams Horn style. The four post are solid mahoga...
Category

H 86 in. W 77.5 in. D 89.5 in.
Modern Brushed Brass Four-Poster Queen Bed with Channel Tufted Velvet Headboard
By Modshop
Located in Compton, CA
Create a beautiful and serene bedroom with the scotch and soda four-poster bed. A brushed brass frame features strong lines that define the boundaries of your sleep space and provide...
Category

H 87 in. W 73 in. D 87 in.
Four Poster Byron Bed with Carved Posts, Panel Headboard and Flame Finials
Located in Tiverton, RI
The Byron is a theatrical piece, as shown it is carefully hand ebonized creating a graphic symmetry. It is shown in our specialty honey stained maple finish with hand painted ebony d...
Category

H 89 in. W 64.38 in. D 86.63 in.
Antiqued Black Maple Four Poster Bed with Wear by Scott James Furniture
Located in Tiverton, RI
The Tulip Top bed is one of our most popular, with a contiguous headboard and post height this bed is perfect for a smaller scale room. Featuring a capped flat headboard with a molde...
Category

H 91 in. W 78 in. D 91 in.
British Colonial Four Poster Queen Size Bed in Cuban Mahogany, circa 1820
Located in Miami, FL
An extremely beautiful British-colonial bed from the West Indies in Cuban mahogany, circa 1820. Adapted in our workshop to fit a standard queen size mattress, this exceptional bed fe...
Category

H 97 in. W 89.25 in. D 62.5 in.
Grand Federal/Sheraton Mahogany Four-Poster Bed, Salem, Ma, circa 1820-1830
Located in Providence, RI
This is a grand mahogany tall post bed with a fully developed canopy framed in mahogany. Many of these beds were not made with elaborate canopies as such; this was an expensive optio...
Category

H 92.25 in. W 58 in. D 75.75 in.
Colonial Style Antique Four Poster Double Bed, 19th Century Raj Bed
Located in Chillerton, Isle of Wight
This is a very unusual bed it has slightly square lines with pierced decorated central post leading up from the centre supporting the wide over bed canopy The bed head and foot have...
Category

Find a variety of four-poster beds available on 1stDibs. Each of these unique four-poster beds was constructed with extraordinary care, often using wood, mahogany and metal. There are 45 antique and vintage four-poster beds for sale at 1stDibs, while we also have 10 modern editions to choose from as well. Four-poster beds have been made for many years, and versions that date back to the 18th Century alongside those produced as recently as the 21st Century. Four-poster beds made by Georgian designers — as well as those associated with Modern — are very popular at 1stDibs. There have been many well-made four-poster beds over the years, but those made by Modshop, Milo Baughman and Benedikt Bolza Design are often thought to be among the most beautiful.

How Much are Four-Poster Beds?

Questions about Four-Poster Beds
Prices for most four-poster beds on 1stdibs are negotiable. You’ll see a "Make an Offer" button on the item details page, indicating that the seller is willing to consider a lower price. It’s not uncommon for customers to get 15–25% off the list price after negotiating. See our tips for negotiating like a pro.
Only experienced, professional sellers who have applied and been thoroughly vetted by our team of experts can sell four-poster beds and other quality items on our site. Learn more about becoming a 1stdibs seller.
The 1stdibs Buyer Protection Guarantee provides coverage for qualified purchases in the unlikely event that the item arrives not as described or is damaged. We’ll work with you and the seller to find a resolution, ensuring your satisfaction. View details
We have partnerships with the world's best shipping providers to facilitate seamless and fully-insured delivery from the seller's location directly to you, wherever you are in the world. Our logistics team is comprised of dedicated members who arrange all the details with our partners, servicing and supporting all shipments. Learn more about shipping on 1stdibs.
For your convenience, we offer multiple payment methods, including all major credit cards and PayPal. For many purchases we also offer financing options or wire transfer. Learn more about payment options on 1stdibs.