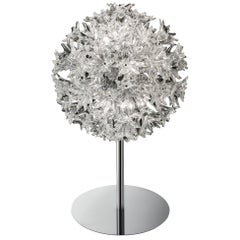 H 31.5 in. Dm 23.63 in.
Venini Esprit Floor Lamp in Crystal
By Venini
Located in New York, NY
The Esprit collection was produced by Venini during the 1970s and offered an exciting blend of creativity and glass-making prowess combined with a meticulous and sensitive investigat...
Category 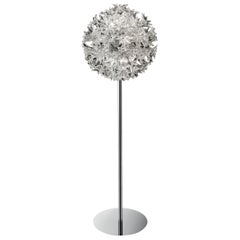 H 180 in. Dm 60 in.
Venini Esprit Medium Suspension Swing Lamp in Crystal
By Venini
Located in New York, NY
Esprit” is an explosion of flowers and stars in handblown, handcrafted glass. Designed to illuminate, shine, sparkle and excite, “Esprit” is ideal for all type of interior. Year ...
Category 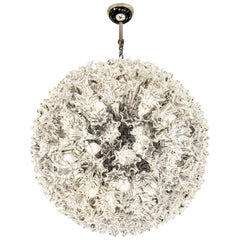 Beginning in the 1930s — and throughout the postwar years especially — Venini & Co. played a leading role in the revival of Italy’s high-end glass industry, pairing innovative modernist designers with the skilled artisans in the centuries-old glass workshops on the Venetian island of Murano. While the company’s founder, Paolo Venini (1895–1959), was himself a highly talented glassware designer, his true genius was to invite forward-thinking Italian and international designers to Murano’s hallowed workshops to create Venini pieces — among them Giò Ponti, Massimo Vignelli, Finnish designer Tapio Wirkkala, Thomas Stearnsof the United States and Fulvio Bianconi.

Paolo Venini trained and practiced as a lawyer for a time, though his family had been involved with glassmaking for generations. After initially buying a share in a Venetian glass firm, he took over the company as his own in 1925, and under his direction it produced mainly classical Baroque designs. In 1932, he hired the young Carlo Scarpa— who would later distinguish himself as an architect — as his lead designer. Scarpa, working in concert with practiced glass artisans, completely modernized Venini, introducing simple, pared-down forms; bright primary colors; and bold patterns such as stripes, banding and abstract compositions that utilized cross sections of murrine (glass rods).

Paolo Venini’s best designs are thought to be his two-color Clessidre hourglasses, produced from 1957 onward, and the Fazzoletto (“handkerchief”) vase, designed with Bianconi in 1949. Bianconi’s masterworks are considered by many to be his Pezzato works — colorful vases with patterns that resemble those of a patchwork quilt. Other noteworthy and highly collectible vintage Venini works include Ponti’s dual-tone stoppered bottles (circa 1948); rare glass sculptures from the Doge series by Stearns, the first American to design for the firm; Vignelli’s striped lanterns of the 1960s; the Occhi vases with eyelet-shaped patterns by Tobia Scarpa (son of Carlo); and, with their almost zen purity, the Bolle (“bubbles”) bottles designed by Wirkkala in 1968.

With these works — and many others by some of the creative titans of the 20th and 21st century — Venini has produced one of the truly great bodies of work in modern design.