H 37.5 in. W 55.5 in. D 17.25 in.
English Regency Console Cabinet
Located in Wilson, NC
The top of this mahogany Regency console cabinet is faux painted to simulate sienna marble. The stiles have gold Egyptian capitals and terminate in recessed panel feet. The door has ...
Category

H 33.5 in. W 42.25 in. D 21 in.
English Regency Hanging Cabinet
Located in Wilson, NC
The doors of this mahogany English Regency shelf/hanging cabinet are framed with mahogany and have recessed panels lined with ebony molding. There is ebony line inlay surrounding boo...
Category

H 32.5 in. W 40 in. D 18 in.
English Rosewood Regency Cabinet
Located in Wilson, NC
English rosewood Regency cabinet, with the top shelf having a balustraded brass gallery that is supported by turned rosewood columns with a mirror back cross banded by rosewood frami...
Category 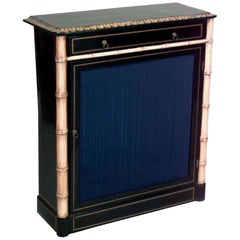 H 32.5 in. W 45 in. D 18.5 in.
English Regency Egyptian Revival Side Cabinet or Credenza
Located in Stamford, CT
A beautiful English regency Egyptian revival simulated rosewood and giltwood side cabinet or credenza.
Category

H 33 in. W 49.75 in. D 16 in.
English Regency Period Secrétaire Cabinet with Egyptian Motifs
By George Oakley
Located in London, GB
A secrétaire cabinet of the Regency period Firmly attributed to George Oakley. Constructed in a finely faded and patinated goncalo alvez, having holly and purple heart stringing;...
Category

H 38.5 in. W 73 in. D 19.5 in.
English Regency 1820s Faux Painted Cabinet with Volutes and Lotiform Columns
Located in Atlanta, GA
An English Regency period faux painted cabinet from the early 19th century, with volutes, rosettes and lotiform semi-columns. Created in England during the first quarter of the 19th ...
Category

H 42 in. W 24.5 in. D 11.75 in.
Pair of English Regency Mahogany Side Cabinets with Brass Mounts, circa 1820
Located in San Francisco, CA
An exceptional matched pair of mahogany Regency period bow front library side cabinets with brass mounts and inlay, applied star decorations, and having original bronze screens. Each...
Category

Pair of English Regency Mahogany Side Cabinets with Brass Mounts, circa 1820

H 33.5 in. W 23.75 in. D 15 in.
Tall Antique Side Cabinet, English, Mahogany, Bedside, Nightstand, Regency, 1820
Located in Hele, Devon, GB
This is a tall antique side cabinet. An English, mahogany drawing room cabinet or bedside nightstand, dating to the Regency period, circa 1820. Appealing Regency cabinetry with ri...
Category

H 36.42 in. W 19.89 in. D 19.89 in.
19th Century English Regency, Two-Door Cabinet, Rosewood with Doré Bronze Mount
By Gillows of Lancaster & London
Located in West Palm Beach, FL
This handsome two-door r cabinet is in the English Regency style and dates from the early 19th century. The piece is detailed with Egyptian caryatid pilasters and the interior has fo...
Category

H 97 in. W 42.5 in. D 19.75 in.
Early 19th Century English Hepplewhite Regency Secretary Bookcase and Cabinet
Located in Brooklyn, NY
Exquisite Hepplewhite secretary bookcase in mahogany, satinwood, and boxwood. The cornice exhibits urns and panels, and the center is punctuated by octagonal panel surmounted by a se...
Category

H 97 in. W 42.5 in. D 19.75 in.
19th Century English Olivewood and Brass Inlaid Cabinet
By Town & Emanuel
Located in London, GB
A William IV cabinet attributed to Town and Emmanuel Constructed in a strongly grained olivewood and dressed with gold brass inlays and an etched and engraved brass panel; rising fr...
Category

H 40.56 in. W 59.85 in. D 16.34 in.
English Regency Rosewood Secretaire
Located in New York, NY
English Regency rosewood secretaire cabinet with two upper shelves supported by a lyre form over a secretaire drawer fitted with a leather writing surface above a pair of grill doors.
Category

H 36 in. W 72 in. D 27.5 in.
English Regency Period Whatnot
Located in Essex, MA
An English Regency period carved and richly colored mahogany whatnot, or open shelving unit, circa 1820, consisting of four open shelves supported by four columns with finials at top...
Category

H 51.5 in. W 21.5 in. D 19 in.
Mahogany English Regency Buffet/Server
Located in Wilson, NC
This buffet/server has a rear gallery with a shaped crest. There is a five-inch-deep shelf supported by turned columns. The back has a recessed panel. There is a drawer above two low...
Category

How Much is an English Regency Cabinet?

Finding the Right Case Pieces and Storage Cabinets for You

Of all the antique and vintage case pieces and storage cabinets that have become popular in modern interiors over the years, dressers, credenzas and cabinets have long been home staples, perfect for routine storage or protection of personal items.

In the mid-19th century, cabinetmakers would mimic styles originating in the Louis XIV, Louis XV and Louis XVI eras for their dressers, bookshelves and other structures, and, later, simpler, streamlined wood designs allowed these “case pieces” or “case goods” — any furnishing that is unupholstered and has some semblance of a storage component — to blend into the background of any interior.

Mid-century modern furniture enthusiasts will cite the tall modular wall units crafted in teak and other sought-after woods of the era by the likes of George Nelson and Finn Juhl. For these highly customizable furnishings, designers of the day delivered an alternative to big, heavy bookcases by considering the use of space — and, in particular, walls — in new and innovative ways. Mid-century modern credenzas, which, long and low, evolved from tables that were built as early as the 14th century in Italy, typically have no legs or very short legs and have grown in popularity as an alluring storage option over time.

Although the name immediately invokes images of clothing, dressers were initially created in Europe for a much different purpose. This furnishing was initially a flat-surfaced, low-profile side table equipped with a few drawers — a common fixture used to dress and prepare meats in English kitchens throughout the Tudor period. The drawers served as perfect utensil storage. It wasn’t until the design made its way to North America that it became enlarged and equipped with enough space to hold clothing and cosmetics. The very history of storage case pieces is a testament to their versatility and well-earned place in any room.

In the spirit of positioning your case goods center stage, decluttering can now be design-minded. A contemporary case piece with open shelving and painted wood details can prove functional as a storage unit as easily as it can a room divider. Whether you’re seeking a playful sideboard made of colored glass and metals, an antique Italian hand-carved storage cabinet or a glass-door vitrine to store and show off your collectibles, there are options for you on 1stDibs.