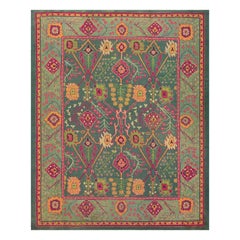 W 64 in. L 97 in.
Donegal Runner, circa 1920s
Located in New York, NY
Seven unidirectional tulips/vases are neatly positioned up the cream field of this Irish runner in the Oushak manner the field and border are both in an stencil style without outline...
Category

Donegal Rug For Sale on 1stDibs

Choose from an assortment of styles, material and more with respect to the donegal rug you’re looking for at 1stDibs. Frequently made of fabric, wool and cotton, every donegal rug was constructed with great care. If you’re shopping for a donegal rug, we have 80 options in-stock, while there are 15 modern editions to choose from as well. You’ve searched high and low for the perfect donegal rug — we have versions that date back to the 19th Century alongside those produced as recently as the 21st Century are available. A donegal rug is a generally popular piece of furniture, but those created in Arts and Crafts, Art Nouveau and Art Deco styles are sought with frequency. Gavin Morton, Charles Voysey and Liberty & Co. each produced at least one beautiful donegal rug that is worth considering.

How Much is a Donegal Rug?