H 40.16 in. W 30.71 in. D 33.86 in.
"Garçonne" Leather or Fabric and Goose Feather Armchair by C. Colombo for Driade
By Carlo Colombo, Driade
Located in New York, NY
"Garçonne" is a luxury armchair, designed by Carlo Colombo and manufactured by Driade, with metal structure, goose feather and different densities polyurethane foams padding and seat...
Category

"Garçonne" Leather or Fabric and Goose Feather Armchair by C. Colombo for Driade

H 30.7 in. W 35.4 in. D 31.4 in.
Armchair Frame Solid Timber & Wood Double Back cushion Lacquered Feet
By sicis
Located in London, GB
Sicis is delighted to welcome you at ‘Home’. The classically inspired extent in contemporary plays an eclectic style, elegant and refined. Interiors express personality. A constant...
Category

H 33.47 in. W 35.44 in. D 35.44 in.
Armchair Frame Made Solid Timber Wood Tassel Tiebacks Backrest
By sicis
Located in London, GB
Sicis is delighted to welcome you at ‘Home’. The classically inspired extent in contemporary plays an eclectic style, elegant and refined. Interiors express personality. A constant...
Category

H 37 in. W 27 in. D 29 in.
Key West Armchair
By Villevenete
Located in Milan, IT
Rigorous lines meet plush, generous volumes in this superb armchair. Suspension steel springs give the seat the necessary support, complementing the generous polyurethane and warm fe...
Category

H 25.6 in. W 33.47 in. D 34.26 in.
Beverly Gray Armchair
By Villevenete
Located in Milan, IT
Imposing yet harmonious, this sophisticated armchair padded with lined polyurethane will ideally add depth to monochromatic bedrooms or living rooms. The plush seat - equipped with s...
Category 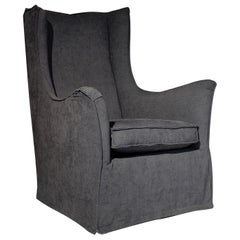 H 40.56 in. W 25.99 in. D 27.56 in.
Beverly Armchair
By Villevenete
Located in Milan, IT
Exuding elegance through its delicately curved profile, this refined armchair features a protective lining for the generous polyurethane padding underneath. The wooden structure, mar...
Category

H 40.56 in. W 25.99 in. D 27.56 in.
Allison Armchair
By Villevenete
Located in Milan, IT
Stately yet harmonious, this luxe armchair padded with lined polyurethane will infuse bold character into rustic-chic decors. The fluffy seat - equipped with suspension steel springs...
Category

H 40.56 in. W 27.56 in. D 32.29 in.
Lynn Armchair
By Villevenete
Located in Milan, IT
Ideal for infusing comfort in any modern interior, this stunning armchair flaunts a sinuous profile upholstered in removable gray fabric with conflicting piping. A rich amount of lin...
Category

H 40.56 in. W 25.99 in. D 27.56 in.
Hampton White Armchair
By Villevenete
Located in Milan, IT
This luminous armchair, raised on softly curved feet, strikes with its voluptuous volumes covered in white fabric (removable) and accented with tone-on-tone piping. A superb solution...
Category

H 40.16 in. W 30.32 in. D 34.26 in.
Key West Gray Armchair
By Villevenete
Located in Milan, IT
The perfect accent piece to relax on after a long workday, this exclusive armchair with a wooden core is generously padded with polyurethane and lined to guarantee utmost comfort. Pr...
Category

H 25.6 in. W 33.47 in. D 34.26 in.
Hampton Armchair
By Villevenete
Located in Milan, IT
This exquisite reinterpretation of the classic Bergère will impeccably blend in classic or contemporary decors alike. Upholstered in azure fabric (removable) with tone-on-tone piping...
Category

H 40.16 in. W 30.32 in. D 34.26 in.
Domino Armchair by Davide Barzaghi
By D3co
Located in Milan, IT
This armchair is part of the Domino collection, the quintessential modular system designed by Davide Barzaghi that allows multiple combinations and total customization. Crafted of as...
Category

H 38.19 in. W 35.83 in. D 30.32 in.
Twelve Blue Armchair by Uto Balmoral
By D3co, Uto Balmoral
Located in Milan, IT
This contemporary armchair designed by Uto Balmoral for D3CO revisits the iconic "Sacco chair," the 1960s bean bag by Italian design company Zanotta. This version features a structur...
Category

H 17.72 in. W 35.83 in. D 30.32 in.
Twelve Orange Armchair by Uto Balmoral
By D3co, Uto Balmoral
Located in Milan, IT
Inspired by the iconic 1960s Sacco chair, this exclusive armchair exudes a sense of relaxation and comfort, adding to the original design a rigid support base. The plush, round top c...
Category

H 37.41 in. W 23.63 in. D 27.96 in.
Velvet Armchair
By Arcahorn Srl.
Located in Milan, IT
Clean lines and luxurious details are the hallmarks of this superb armchair designed to take center stage in any decor. The Minimalist profile is enhanced by the square wooden frame ...
Category

H 24.81 in. W 29.53 in. D 37.8 in.
The Maddox Easy Chair, Modelled on a Howard and Sons Armchair, Upholstered
Located in London, GB
A fine handmade easy armchair, the frame modelled on an original by Howard and Sons, constructed from beechwood, the legs in walnut with brass castors. Upholstered using traditional ...
Category

The Maddox Easy Chair, Modelled on a Howard and Sons Armchair, Upholstered

H 31.5 in. W 27.56 in. D 35.44 in.
Acquamarina Armchair
By Galimberti Nino
Located in Milan, IT
Elegance and comfort mix in a harmonious design that adds a refined touch to both a modern and a classic interior. Either by the fire in a living room, as a reading chair in the stud...
Category

H 28.35 in. W 30.71 in. D 35.44 in.
Camelia Armchair
By Galimberti Nino
Located in Milan, IT
Part of the Camelia collection, and ideally paired with one of the coffee tables in the same series for a complete look, this elegant armchair mixes indulgent comfort with sleek desi...
Category

H 39.7 in. W 35.8 in. D 38.1 in.
Brown Eco-Leather Armchair
By A.R. Arredamenti
Located in Milan, IT
An elegant and modern piece of functional decor, this armchair is upholstered with durable and resistant eco-leather on the back and patterned fabric for the seat and backrest cushio...
Category

H 31.5 in. W 30.71 in. D 31.89 in.
Mr. Floyd Armchair
By Bodema
Located in Milan, IT
Part of the Floyd collection, this sophisticated and comfortable armchair will be a versatile addition to any decor. Its clean lines are of crush-proof polyurethane padding that cove...
Category

H 34.65 in. W 39.77 in. D 43.31 in.
Lu' Armchair
By Bodema
Located in Milan, IT
This seat combines a subtle elegance with bold design, becoming an accent piece to adorn a living room, entryway, study or bedroom in style. Its traditional Bergère style features cl...
Category

H 70.87 in. W 35.44 in. D 31.5 in.
Ritz Macassar Gentleman's Chair
By LINLEY London
Located in London, GB
Evoke the glamour of 1920s London with the Ritz Macassar armchair, handcrafted in our British workshops, this bold chair exudes extravagant sophistication and can be upholstered in y...
Category

H 28.35 in. W 29.53 in. D 33.47 in.
African Hand Beaded Armchair
Located in Hudson, NY
a beautiful example of African hand beaded chairs. this example, from Cameroon, has a floral motif around the skirt and back of the chair, and geometric panels on the seat and arms. ...
Category

H 39 in. W 26 in. D 24 in.
Ritz Macassar Ladies Chair
By LINLEY London
Located in London, GB
Evoke the glamour of 1920s London with the Ritz Macassar armchair, handcrafted in our British workshops, this bold chair exudes extravagant sophistication and can be upholstered in y...
Category

How Much are Contemporary Trimming Armchairs?

Contemporary trimming armchairs can differ in price owing to various characteristics — the average selling price at 1stDibs is $4,960, while the lowest priced sells for $1,875 and the highest can go for as much as $68,723.

Finding the Right Armchairs for You

Armchairs have run the gamut from prestige to ease and everything in between.

Long before industrial mass production democratized seating, armchairs conveyed status and power. In ancient Egypt, the commoners took stools, while in early Greece, ceremonial chairs of carved marble were designated for nobility. But the high-backed early thrones of yore, elevated and ornate, were merely grandiose iterations of today’s armchairs.

Modern-day armchairs, built with functionality and comfort in mind, are now central to tasks throughout your home. Formal dining armchairs support your guests at a table for a cheery feast, a good drafting chair with a deep seat is parked in front of an easel where you create art and, elsewhere, an ergonomic wonder of sorts positions you at the desk for your 9 to 5.

When placed under just the right lamp where you can lounge comfortably, both elbows resting on the padded supports on each side of you, an upholstered armchair — or a rattan armchair for your light-suffused sunroom — can be the sanctuary where you’ll read for hours. If you’re in the mood for company, your velvet chesterfield armchair is a place to relax and be part of the conversation that swirls around you. Maybe the dialogue is about the beloved Papa Bear chair, a mid-century modern masterpiece from Danish carpenter and furniture maker Hans Wegner, and the wingback’s strong association with the concept of cozying up by the fireplace, which we can trace back to its origins in 1600s-era England, when the seat’s distinctive arm protrusions protected the sitter from the heat of the period’s large fireplaces.

If the fireside armchair chat involves spirited comparisons, your companions will likely probe the merits of antique and vintage armchairs such as Queen Anne armchairs, Victorian armchairs or even Louis XVI armchairs, as well as the pros and cons of restoration versus conservation.

Everyone seems to have a favorite armchair and most people will be all too willing to talk about their beloved design. Whether that’s the unique Favela chair by Brazilian sibling furniture designers Fernando and Humberto Campana, who repurpose everyday objects to artful effect; or Marcel Breuer’s futuristic tubular metal Wassily lounge chair; the functionality-first LC series from Charlotte Perriand, Le Corbusier and Pierre Jeanneret; or the Eames lounge chair of the mid-1950s created by Charles and Ray Eames, there is an iconic armchair for everyone and every purpose. Find yours on 1stDibs right now.

If anyone is brave, humble and adept enough to recolor these mid-century masterpieces, it’s Ilse Crawford. Here, she gives us the details on her five earthy paint choices and tells us how she feels about design collaborations.

How to Reupholster a Chair

Want to update an old chair that still has good bones? We spoke to experts to find out how they approach reupholstering antique furniture.