H 15.75 in. W 19.69 in. D 27.56 in.
François Monnet Style MidCentury French Steel and Smoked Glass Coffee Table, 70s
By François Monnet
Located in Cerignola, Italy Puglia
This coffee table was made and produced in the 70s. The structure suggests that the table was designed in the style of François Monnet. The table is characterized by a heavy stainles...
Category

H 15.5 in. W 41 in. D 20 in.
Clock 70 Coffee Table
Located in Milan, IT
Simple and clean in its appearance yet utterly refined and meticulous in its manufacturing, this coffee table combines glass, metal, and wood in a gloriously harmonious design. The r...
Category 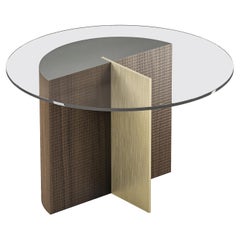 H 16.15 in. W 38.59 in. D 38.19 in.
70s George Mathias Coffee Table with Etched Artwork by Maho Nr 12/50
By George Mathias 1
Located in Amstelveen, Noord
George Mathias furniture was produced in limited quantities in the mid 1970's to the early 1980's. He worked with artists in France and Belgium like Roger Vanhevel, producing very at...
Category

H 13.78 in. W 31.5 in. D 51.19 in.
Flight Contemporary low-Coffee Table, 70x50 cm White silvered glass
By Sabrina Landini
Located in Pietrasanta, IT
This table is an art contemporary piece, made entirely by hand in Tuscany Italy, 100% of Italian origin. The special silver plating treatment, performed over the years by Sabrina,...
Category

H 15.75 in. W 19.69 in. D 27.56 in.
Davidson's '70s Inspired, Malibu Coffee Table, in Green Birds Eye Maple and Bras
By Davidson
Located in London, GB
A glamourous coffee table finished in an eye-catching high gloss bird's-eye maple hand tinted in a vibrant shade of green. The tabletop features radiused corners and is supported on ...
Category

H 14.57 in. W 47.25 in. D 31.5 in.
Mid-Century Rosewood Italian Coffee or Sofas Table with Wheels by Formanova 70s.
By Formanova, Gianni Moscatelli
Located in Sacile, PN
Formanova 1978 rosewood coffee or sofas table with wheels. Formanova born from the creativity, passion of Gianni Moscatelli. In 1959, after having graduated from the Higher Insti...
Category

H 18.12 in. W 23.63 in. D 23.63 in.
DeCastelli Alchemy 70 Coffee Table in Iron with Stainless Steel Base by Stormo
By DeCastelli
Located in New York, NY
Alchemy is an ancient art whose main goal was to convert humble metals to precious ones, using an esoteric language to give materials a metaphysical quality. The Alchemy collection w...
Category

H 14.97 in. W 24.41 in. D 46.46 in.
20th Century Pair of Tables Elephant-Shaped in Rattan Attr. Vivai del Sud '70s
By Vivai del Sud
Located in Turin, IT
Very Peculiar couple of low tables elephant-shaped entirely in rattan. Each table has a tray that could be removed when needed. Attributed to Vivai del Sud, Italy, '70s. Good condition.
Category

H 21.66 in. W 23.63 in. D 15.75 in.
Tommaso Barbi in the Stye Trolley Bar from the 70's
By Tommaso Barbi
Located in bari, IT
70s liquor bottle trolley with double glass shelf, the structure is made of brass and beige lacquered metal, Tommaso Barbi style.
Category

Tommaso Barbi in the Stye Trolley Bar from the 70's

H 22.05 in. Dm 24.81 in.
Italian 70s Coffee Table
Located in Los Angeles, CA
Hey Mr. DJ put a record on...<br /> A table that opens up to a bar and place for vinyls! What more could one ask for? GENIALE! The vinyls can now be replaced with magazines...
Category

H 19 in. Dm 43.5 in.
70's Sculptural Coffee Table
Located in New York, NY
A chrome plated steel 1970's cocktail table with a half inch rectangular glass top in the style of French designer Maria Pergay. The base can accommodate a larger top. The base measu...
Category

H 20.5 in. W 55 in. D 55 in.
70's Tobacco Leaf Coffee Table
Located in North Miami, FL
Textural, organic, and terribly chic... this 70's coffee table is sheathed in tobacco leaves and given a high gloss acrylic finish to complement its sleek simplicity.
Category

H 14 in. W 55 in. D 20 in.
White 70's Italian Coffee Table
Located in New York, NY
Made in Italy by Sabot in the 70's. Originally made with black laminate it has been lacquered white. There is steel or nickel plated wide receptacle in the middle of the table that c...
Category

H 13.35 in. W 51 in. D 31.5 in.
Pristine 70's Lucite Coffee Table
Located in North Miami, FL
Sublimely simple and well-executed lucite coffee table with bevelled edges and bevelled glass top. Not too big and not too small!
Category

H 12.5 in. W 39.25 in. D 35.25 in.
Italian 70's Coffee Table Attributed to Willy Rizzo
By Willy Rizzo
Located in Los Angeles, CA
Signor Rizzo's greatness is seen in this tantalizing table. Pockets of burl wood and brass make this a true piece of art for your home.
Category

H 21.86 in. Dm 27.56 in.
A Hip Vintage 70's Chrome, Glass and Mirror Coffee Table
Located in Hudson, NY
This very cool coffee table seems part Studio 54 and part Cocaine line party fantasy. I can almost feel the beat of the music and see the disco lights flashing. Made from simple geom...
Category

H 15.36 in. W 44.49 in. D 44.49 in.
A 70`s Italian Cocktail Table
Located in London, GB
An Italian cocktail table in lacquered rosewood with various compartments for bottles & glasses. There are six compartments and the covers are interchangeable.
Category

H 16.75 in. W 53 in. D 26.75 in.
Versatile French 70's Table
Located in New York, NY
This unusual French table may be used either as a coffee table or placed in an upright position to serve as a card or dining table. NOTE: At the time of photography, the original gla...
Category

H 29.75 in. W 14 in.
70's Chrome side / cofee table/s
Located in New York, NY
Two levels, irregularly shaped chrome bases that can be used for a glass top coffee table or as side tables as in one of the pictures.
Category

H 16 in. Dm 46 in.
Fabulous 70's Pieced Mirror Coffee Table
Located in North Miami, FL
Why DID Miami have so many mirrored coffee tables in the 70's?...This one's a beauty with a nicely sized top, skirted all-around with 1"x10" mirror strips. Just the right amount of a...
Category

How Much are Coffe Table 70s?