Free Shipping
Cartier Trinity Three-Color 18 Karat Gold Knot Cufflink Stud Set
By Cartier
Located in New York, NY
Classic and elegant 18K white, yellow and pink gold cufflink stud set from the "Trinity" collection by Cartier. They resemble knots, with one side slightly larger than the other on t...
Category 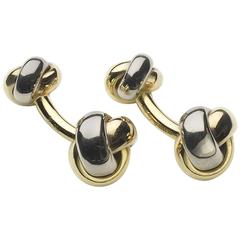 Free Shipping
Cartier Gold Knot Ring
By Cartier
Located in Darnestown, MD
Unusual modernist design knot ring by Cartier in a scratched finish typical of the 1960's. Ring is a size 9 1/2; can be sized and is equally suitable for a man or woman.
Category

Free Shipping
1970s Cartier Gold Knot Cufflinks
By Cartier
Located in Aspen, CO
Probably the easiest cufflink types to put on, these back to back cufflinks weigh 25.48 grams, they are signed Cartier and numbered. The diameter of the front larger knot is just o...
Category

Free Shipping
Cartier Trinity Tri Color Gold Knot Cufflinks
By Cartier
Located in Boca Raton, FL
A pair of 18k yellow rose and white gold cufflinks by Cartier. The cufflinks measure 13mm in diameter in front and 10mm in diameter in back. The weight of the pair is 18.5 grams. ...
Category

W 0.50 in. L 1.38 in.
Cartier Trinity Sapphire Cabochon Knot Stud 18 Carat Gold Earrings
By Cartier
Located in Bishop's Stortford, Hertfordshire
These earrings by Cartier are from their Trinity collection and feature a sapphire cabochon stone set centrally within a knot design. Set in tri colour 18ct gold and with a post and ...
Category

Free Shipping
Cartier Trinity Three-Color 18 Karat Gold Knot Cufflink Stud Set
By Cartier
Located in New York, NY
Classic and elegant 18K white, yellow and pink gold cufflink stud set from the "Trinity" collection by Cartier. They resemble knots, with one side slightly larger than the other on t...
Category

Cartier Knot For Sale on 1stDibs

You are likely to find exactly the cartier knot you’re looking for on 1stDibs, as there is a broad range for sale. Frequently made of Gold, 18k Gold and Yellow Gold, this item was constructed with great care. Find an antique version now, or shop for 53 vintage or 20 modern creation for a more contemporary example of these cherished accessories. Making the right choice when shopping for a cartier knot may mean carefully reviewing examples of this item dating from different eras — you can find an early iteration of this piece from the 20th Century and a newer version made as recently as the 21st Century, both of which have proven very popular over the years. For this particular piece, are consistently popular carat weights. A cartier knot can make for a versatile accessory, but a selection from our variety of 9 Diamond versions can add an especially stylish touch. A round cut version of this piece has appeal, but there are also oval cut and cabochon versions for sale. If you’re browsing our inventory for a cartier knot, you’ll find that many are available today for women, but there are still pieces to choose from for unisex and men.

How Much is a Cartier Knot?

Prices for a cartier knot can differ depending upon size, time period and other attributes — at 1stDibs, these accessories begin at $1,145 and can go as high as $42,988, while this accessory, on average, fetches $3,495.

Perhaps 1847 was not the ideal time to open a new watchmaking and jewelry business, as the French Revolution was not kind to the aristocracy who could afford such luxuries. Nevertheless, it was the year Louis-François Cartier (1819–1904) — who was born into poverty — founded his eponymous empire, assuming control of the workshop of watchmaker Adolphe Picard, under whom he had previously been employed as an assistant. Of course, in the beginning, it was a relatively modest affair, but by the late 1850s, Cartier had its first royal client, Princess Mathilde Bonaparte, niece of Napoleon Bonaparte, who commissioned the jeweler to design brooches, earrings and other accessories.

Under the leadership of Louis-François’s son, Alfred, who took over in 1874, business boomed. Royalty around the world wore Cartier pieces, including Tsar Nicholas II of Russia, the Maharaja of Patiala and King Edward VII, who had 27 tiaras made by the jewelry house for his coronation in 1902 and issued Cartier a royal warrant in 1904. (Today, the British royal family still dons Cartier pieces; Kate Middleton, Duchess of Cambridge, regularly sports a Ballon Bleu de Cartier watch.)

Cartier’s golden years, however, began when Alfred introduced his three sons, Louis, Pierre and Jacques, to the business. The brothers expanded Cartier globally: Louis reigned in Paris, Pierre in New York and Jacques in London, ensuring their brand’s consistency at their branches across the world. The trio also brought in such talents as Charles Jacqueau and Jeanne Toussaint.

One of Cartier’s earliest major successes was the Santos de Cartier watch — one of the world's first modern wristwatches for men. (Previously, a large number of people were using only pocket watches.) Louis designed the timepiece in 1904 for his friend, popular Brazilian aviator Alberto Santos-Dumont, who wanted to be able to check the time more easily while flying.

Cartier’s other famous timepieces include the Tank watch, which was inspired by the linear form of military tanks during World War I, and the so-called mystery clocks. Invented by watchmaker and magician Jean-Eugène Robert-Houdin and later crafted exclusively for Cartier in the house’s workshop by watchmaker Maurice Couët, the mystery clocks were so named because the integration of glass dials on which the clocks’ hands would seemingly float as well as structures that are hidden away within the base give the illusion that they operate without machinery.

On the jewelry side of the business, Cartier’s internationally renowned offerings include the Tutti Frutti collection, which featured colorful carved gemstones inspired by Jacques’s trip to India and grew in popularity during the Art Deco years; the panthère motif, which has been incorporated into everything from brooches to rings; and the Love bracelet, a minimal, modernist locking bangle reportedly inspired by medieval chastity belts.

While the Cartier family sold the business following the death of Pierre in 1964, the brand continues to innovate today, renewing old hits and creating new masterpieces. It’s certainly one of the most well known and internationally revered jewelers in the world among clients both existing and aspirational.

On 1stDibs, find a growing collection of contemporary and vintage Cartier watches, engagement rings, necklaces and other accessories.

Cartier created some of the most iconic jewelry designs that defined this era.