H 16 in. W 20 in.
Bruce Springsteen
By Joel Bernstein
Located in Mount Pleasant, SC
Bruce Springsteen standing on the boardwalk in front of the Empress Hotel in Asbury Park, NJ. 1979 This photograph was used as the single sleeve cover for “Hungry Heart” from The Ri...
Category

H 11 in. W 14 in. D .1 in.
Bruce Springsteen
By Timothy White
Located in Mount Pleasant, SC
Archival digital print. Hand signed and numbered by the artist. Artwork is in excellent condition. Image size: 19.5 x 19.5 in. Edition of 25. Number 25/25
Category

H 16 in. W 20 in.
Bruce Springsteen
By André Monet
Located in Montreal, Quebec
Inspired by cinema, photography, music and literature, Monet has a natural connection and sense for the current society and his contemporaries. His signature conceptual assemblage of...
Category 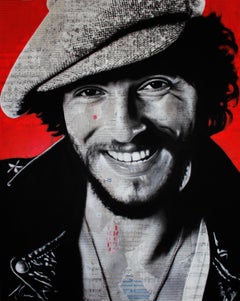 H 74 in. W 59 in.
Bruce Springsteen boardwalk
By Joel Bernstein
Located in Mount Pleasant, SC
Bruce Springsteen standing on the boardwalk in front of the Empress Hotel in Asbury Park, NJ. 1979 This photograph was used as the single sleeve cover for “Hungry Heart” from The Ri...
Category 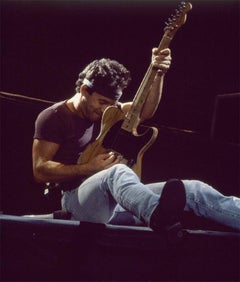 H 39.38 in. W 26.38 in. D 0.4 in.
Bruce Springsteen on fence
By Joel Bernstein
Located in Mount Pleasant, SC
Bruce Springsteen sitting on the boardwalk in Asbury Park, NJ. 1979 With Ferris Wheel and Palace Amusements in the background. Limited Edition of 75. Signed on bottom right.
Category

Bruce Springsteen "Fast Food" 1981
By Jim Marchese
Located in New York, NY
Denmark, May 1981 "When we got to a new town, the joke was that there was a $5 tip for whomever in the crew spotted "the arches" first." 16x20” Limited Edition Signed by Jim March...
Category

Bruce Springsteen For Sale on 1stDibs

Find the exact bruce springsteen you’re shopping for in the variety available on 1stDibs. You can easily find an example made in the Pop Art style, while we also have 5 Pop Art versions to choose from as well. Making the right choice when shopping for a bruce springsteen may mean carefully reviewing examples of this item dating from different eras — you can find an early iteration of this piece from the 20th Century and a newer version made as recently as the 21st Century. On 1stDibs, the right bruce springsteen is waiting for you and the choices span a range of colors that includes black, gray, beige and red. A bruce springsteen from Jim Marchese, Joel Bernstein, Frank Stefanko, Fernando Natalici and Patrick Harbron — each of whom created distinctive versions of this kind of work — is worth considering. Frequently made by artists working in archival pigment print, pigment print and silver gelatin print, these artworks are unique and have attracted attention over the years. If space is limited, you can find a small bruce springsteen measuring 5.91 high and 5.91 wide, while our inventory also includes works up to 59 across to better suit those in the market for a large bruce springsteen.

How Much is a Bruce Springsteen?

British portraitist David Bailey gets up close to his celebrity subjects.

One of the 20th century's most important female photographers is finally being recognized as a daring and seminal artist.