H 31 in. W 19 in. D 19 in.
Haly Chair Blue
By Chapel Petrassi
Located in Firenze, IT
Haly chair was designed by connecting the various ways of processing techniques of metal with a research on aluminium surfaces treatment and finishing. Standing in contrast to the ha...
Category

H 33.47 in. Dm 20.48 in.
Set of 2 Livia Blue Chairs by Giò Ponti
By L'Abbate
Located in Milan, IT
Designed in 1937 by Giò Ponti to furnish the Faculty of Literature of Padua University, this timeless piece of high-quality design was presented by L'Abbate who started producing it ...
Category 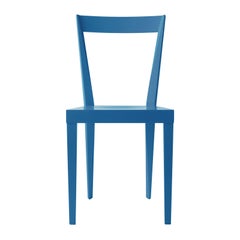 H 33.27 in. W 15.95 in. D 18.12 in.
Opus Garden Blue Chair with Armrests by Carlo Rampazzi
By Sergio Villa
Located in Milan, IT
Stunning from all angles, this sculptural chair from the Opus Garden Collection boasts a contemporary style that will enliven any outdoor area. Crafted of hand-bent iron rods, the si...
Category

H 34.26 in. W 32.68 in. D 20.48 in.
Framework Set of 2 Blue Chairs by Steffen Kehrle
By L'Abbate
Located in Milan, IT
Skillfully crafted of beechwood with a blue-lacquered finish, this set of two chairs boasts a contemporary and versatile allure. Designed by Steffen Kehrle, it is part of the Framewo...
Category

H 31.11 in. W 15.75 in. D 19.49 in.
Balù Blue Chair by Emilio Nanni
By Trabà
Located in Milan, IT
This unique chair is reminiscent of the traditional tub chair, with welcoming and embracing back and armrests and extremely comfortable seat. Its clean and elegant design is marked b...
Category

H 33.47 in. W 16.93 in. D 14.97 in.
Blue Chair A by Lucien Engels, 1957
By Lucien Engels
Located in Vlimmeren, BE
In 1954 Lucien Engels designed the holiday home for children ‘Emile Vandervelde II’ in Oostduinkerke, Belgium. It was an amazing overall project: He designed the buildings, the inte...
Category

H 27.17 in. W 16.15 in. D 18.9 in.
Fitt Hugo 044 Light Blue Chair by Victor Carrasco
By Billiani 1911
Located in Milan, IT
Boasting a captivating pastel light blue color, this modern chair is inspired by the classic silhouette of a shell chair. Designed by Victor Carrasco, it boasts clean and essential l...
Category

H 30.71 in. W 21.07 in. D 20.08 in.
Simple Blue Chair in Brass and Leather, Made in Italy
By Nicola Falcone
Located in Firenze, IT
A simple yet elegant chair in authentic blue leather with solid lines framed with gold painted brass. For sophisticated or simple contemporary setting. Measures 45 cm x 45 cm x H...
Category

Simple Blue Chair in Brass and Leather, Made in Italy

H 29.53 in. W 17.33 in. D 18.51 in.
Mid-Century Modern, Rey Blue Chair by Bruno Rey, Design 1971
By Bruno Rey, Dietiker
Located in Encino, CA
Referred to as "the most successful piece of Swiss Furniture of all time" by the Swiss Museum of Design in Zurich, the Rey chair is a Swiss design icon since 1971. Designed by Br...
Category

H 30.71 in. W 21.66 in. D 20.48 in.
Lalia Chair with Blue Velvet
Located in Paris, FR
Chair Lalia with structure in solid wood, upholstered seat and back, covered with high quality blue velvet fabric. Also available with other fabrics on request.
Category

H 32.29 in. W 22.45 in. D 26.38 in.
Blue Maple Chair
By Pietro Arnoldi
Located in Milan, IT
The chair is part of a limited series of unique and vibrant pieces of furniture crafted from the wood of tree trunks damaged or derived from industrial waste processing. Finished in ...
Category

H 58.27 in. W 17.72 in. D 21.66 in.
Blue Maple Chair
By Pietro Anoldi
Located in Milan, IT
The chair is part of a limited series of unique and vibrant pieces of furniture crafted from the wood of tree trunks damaged or derived from industrial waste processing. Finished in ...
Category

H 32.88 in. W 20.87 in. D 21.26 in.
Blue Solferino Paracord Chair by Collezione Milano
By Eligo
Located in Milan, IT
Distinctive for its slender silhouette, this stunning chair embodies the perfect balance between solidity and lightness. A tribute to the iconic Superleggera by Gio Ponti, with whom ...
Category

H 40.95 in. W 15.75 in. D 16.93 in.
"Shiny chair" in Blue Edition by Supaform
By Supaform
Located in Saint Petersburg, RU
Supaform has created this chair, made especially for the "Collectible" design fair in Brussels. The shiny chair is metal made but it gets a very poetic and delicate look, merging ge...
Category

H 31.11 in. W 23.63 in. D 19.3 in.
Tiffany Blue Cleo Chair
By Francesco Della Femina
Located in Milan, IT
This handmade chair offers a sense of regality with its elegant, minimalistic design and is surprisingly comfortable. It features a structure in black varnished iron but is also avai...
Category

H 27.96 in. W 23.23 in. D 17.33 in.
Birdy Chair in Blue or Natural Finish
Located in Paris, FR
Chair Birdy made in natural rattan in blue finish. With back and seat cushions included. Also available in natural rattan finish. Lead time production if on stock 2-3 weeks, if...
Category

H 17.72 in. W 16.54 in. D 16.54 in.
Herman Miller Eames Office Desk Chair in Ultramarine Blue
By Charles and Ray Eames, Herman Miller
Located in Brooklyn, NY
One of the most sought after colors in Eames shell chairs: Ultramarine blue. This chair has bright bold color with no sun fading. Signed Herman Miller and guaranteed authentic. Sits ...
Category

H 32 in. W 26 in. D 26 in.
Contemporary Chair Blue Haly Aluminium by Chapel Petrassi
By Chapel Petrassi
Located in Le Perreux-sur-Marne, FR
Haly is a contemporary sculptural seating with circular shapes and soft lines. Crafted of metal, Haly chair combines a bold attitude and a delicate profile. Haly was designed by com...
Category

H 33.46 in. W 20.47 in. D 16.53 in.
Bonheur Chair in Blue Velvet and Polished Brass
By Gio Pagani
Located in Ponte Enza di Gattatico, IT
Available in the bench or chair version.? Bonheur is composed of an internal wooden frame upholstered in polyurethane foam of different densities.? Bonheur chair is available complet...
Category

H 26.78 in. W 26.38 in. D 24.41 in.
1 Navy Blue Knoll Pollock Chair
By Charles Pollock
Located in Pasadena, TX
Charles Pollock worked in George Nelson"s office after receiving a bachelor’s degree in Industrial Design from Pratt Institute. In addition to his work for Knoll, he has designed cha...
Category

H 41.74 in. W 19.3 in. D 17.72 in.
Soft Navy Blue Chair by Daniel Emma, Made in Australia
By Daniel Emma
Located in Firenze, IT
If you want to get a colorful accent to your home, then the soft navy blue chair is the ideal choice. This chair features a steel frame, with powder coat finish, and a plywood seat, ...
Category

Soft Navy Blue Chair by Daniel Emma, Made in Australia

H 27.96 in. W 17.72 in. D 16.54 in.
New Folding Iron Chair Blue 5002 by Houtique
By Masquespacio, Houtique
Located in Miami, FL
New folding chair blue 5002 by Houtique signed by Federico Giner, Valencia, Spain. We have traveled to the past to pick up the 085 chair, an icon of postmodern design. We have retur...
Category

H 30.31 in. W 20 in. D 17.79 in.
Balù Extra Large Met Light Blue Chair by Emilio Nanni
By Trabà
Located in Milan, IT
A perfect example of refined craftsmanship, this striking chair exudes comfort and sophistication. A larger version of the Balù chair designed by Emilio Nanni, it features a beechwoo...
Category

H 38.19 in. W 26.78 in. D 24.41 in.
Contemporary Madda Lounge Chair in Blue Wool
By Michael Felix
Located in Los Angeles, CA
The Madda is a contemporary interpretation of the classic club chair. The metal base fully wraps around the chair, as if to squeeze it into it's plump and comfortable upper seating a...
Category

H 36 in. W 24.50 in. D 21 in.
Iconic Eero Aarnio Blue Pastil Chair
By Eero Aarnio
Located in New York, NY
Eero Aarnio made the first prototype of the Pastil chair out of polystyrene, which helped him to verify the measurements, ergonomics and rocking ability. In 1968 he received the Amer...
Category

H 35.5 in. W 20.75 in. D 25.5 in.
Contemporary Solid Brass Chair With Hand Woven Blue Cane
By Troy Smith Studio
Located in Toronto, Ontario
The BC chair was built and designed by artist Troy Smith. This one of a kind chair is made out of solid brass and hand woven hand dyed blue cane. This chair was hand built with the h...
Category

H 35 in. W 20 in. D 22 in.
Contemporary Tanit Soft Chair with Blue Velvet Cover
By Francesco Soro
Located in Milan, Lombardy
The ‘Tanit Soft’ chairs are available with an option that makes them unique objects in terms of richness and comfort: an upholstered and quilted cover of various colors that is put o...
Category

H 33.08 in. W 14.38 in. D 17.72 in.
Blue Paris Outdoor Chair by Gianna Farina & Marco Gorini
By Strato
Located in Milan, IT
With a beautifully polished stainless steel structure, the stylish Paris outdoor chair features padding on the seat and back that is upholstered in high-performance Rubelli fabric in...
Category

Reproduction Spindle Back Light Green Side Chair with Blue Underneath

Set of 6 Blue and Beechwood Chairs by Farstrup Furniture

H 31.5 in. W 23.5 in. D 23.3 in.
Chair Genova Eticaliving, Blue Fabric and Velvet, Made in Italy
By VG-VGnewtrend
Located in Quinto di Treviso, Treviso
Eticaliving: A Philosophy That Becomes Matter The project Eticaliving, a cobranding between Slow+Fashion+Design and VGnewtrend, was created to meet a market need, increasingly fel...
Category

Chair Genova Eticaliving, Blue Fabric and Velvet, Made in Italy

H 41.34 in. W 19.69 in. D 17.72 in.
Lara Bohinc, Orbit Chair, Brushed Brass and Blue Wool Fabric
By Lara Bohinc
Located in London, GB
This is the first time that Bohinc explores a design favourite; the chair. In the collection, Lara Bohinc develops her stellar themes, finding inspiration in planetary and lunar orb...
Category

H 41.34 in. W 23.63 in. D 27.56 in.
Tacchini Mayfair Chair in Blue Calantha Fabric by Christophe Pillet
By Tacchini, Christophe Pillet
Located in New York, NY
Mayfair reception chair reflects the same curvaceous form as the easy chair, but its slim metal legs make it lighter. Its distinctive design is both practical and comfortable, making...
Category

H 38 in. W 18 in. D 16 in.
Midcentury Style Italian Lounge Chair in Blue
Located in London, GB
Sophia was inspired by stylish Italian design from the 1950s and is now created by English craftsman for the 21st century. We developed a lounge chair with the option of producing an...
Category

An assortment of blue chairs is available at 1stDibs. Each of these unique blue chairs was constructed with extraordinary care, often using wood, fabric and metal. We have 748 antique and vintage blue chairs in-stock, while there are 459 modern editions to choose from as well. Blue chairs have been made for many years, and versions that date back to the 18th Century alongside those produced as recently as the 21st Century. Mid-Century Modern, Modern and Scandinavian Modern blue chairs are consistently popular styles. There have been many well-made blue chairs over the years, but those made by Carl Hansen & Søn, Hans J. Wegner and Herman Miller are often thought to be among the most beautiful.

How Much are Blue Chairs?

Blue chairs can differ in price owing to various characteristics — the average selling price at 1stDibs is $2,524, while the lowest priced sells for $53 and the highest can go for as much as $60,000.