H 15.25 in. Dm 14 in.
Hand Painted Asian Blue Bird Vase
Located in Pataskala, OH
Lovely little blue bird adorns this blue vase. The yellow gold band around the body of the vase is the canvas for the hand painted detailed bird who sits among sprigs of bamboo. Scen...
Category

H 6.3 in. W 4.34 in. D 4.34 in.
Hungarian Porcelain Eosin Glazed Bird Vase, Zsolnay, circa 1900
Located in New York, NY
One side featuring a turkey the other side featuring a duck. Stamped Zsolnay Pecs. Made in Hungary. Inscribed artists initials K.M.
Category

H 7.25 in. Dm 4.25 in.
Birds Porcelain Vase with Bronze
Located in Paris, FR
Vase birds porcelain with bronze all in hand painted porcelain and with bronze trim details up and down the vase.
Category 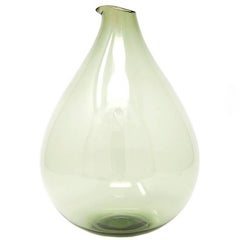 H 4.93 in. Dm 4.34 in.
Pair of Huge Chinese Hand-Carved Wood Cinnabar Dragon and Bird Vases
Located in London, GB
We are delighted to offer for sale this lovely hand-carved pair of Chinese Cinnabar vase’s depicting dragons birds and flowers. A very good looking and well made pair, hand-carved...
Category

H 24.02 in. Dm 11.82 in.
Japanese Earthenware Vases with Birds and Butterflies
Located in New York, NY
A beautiful pair of Earthenware 'bisque' colored mid-20th century Japanese vases with a raised floral, butterfly and 'phoenix' bird relief. Both vases signed on side as shown in imag...
Category

H 14.25 in. W 6 in. D 6 in.
19th Century Victorian Exotic Bird Ironstone Vase
Located in London, GB
The baluster form decorated with an exotic bird amongst foliage, in colours over a blue transfer. With a giltwood cover and standing on a giltwood base. Wired with cloth-cove...
Category

H 7 in. Dm 4 in.
Catteau Era Ceramic Art Deco Vase with Bird
By Charles Catteau for Boch Freres
Located in Oakland, CA
Catteau era vase with bird. Any piece depicting an animal is highly sought after. This was a great era for decorative pottery and Boch cloisonné ceramics from this company have great...
Category

H 9 in. W 5 in. D 5 in.
Modern Murano Glass Bird-Vase by Cenedese in Red Color, Mid-1960s Antonio da Ros
By Cenedese
Located in Venice, Murano
A modern Murano glass bird made in the mid-1960s in Murano by the glass-factory Gino Cenedese e Figlio and designed by Antonio da Ros. The bird is made in lavender glass with a splas...
Category

H 6.3 in. W 3.2 in. D 8.3 in.
Modern Glass Vase with Birds Decor Grey Sofina Boutique Kitzbuehel
By Sofina Boutique Kitzbühel
Located in Kitzbuhel, AT
Handblown modern crystal vase with two birds sitting on oak leaves in grey glass. The decor is hands-free engraved by glass artists all around by artists in Bavaria by Sofina . Sofin...
Category

Pair of Cloisonné Multicolored Vases with Birds, Flowers, and Serpents

H 12.21 in. Dm 3.94 in.
William Baron Blue Art Pottery Bird Trumpet Vase, circa 1900
By William Baron
Located in Bishop's Stortford, Hertfordshire
An unusual art pottery vase of trumpet shape decorated with a bird perched on a fruiting branch by William Baron. The tall waisted vase is incised and hand decorated and incised with...
Category

H 10.24 in. Dm 3.94 in.
Country Style Crystal Vase Green Glass Birds Decor Sofina Boutique Kitzbuehel
By Sofina Boutique Kitzbühel
Located in Kitzbuhel, AT
About Sofina Crystal: This handblown Crystal vase is one of a selection of Sofina crystal hand-crafted in Bavaria/Germany. Can be used as a vase or with candles. The two birds sittin...
Category

H 6.25 in. Dm 4.75 in.
Country Style Hand Blown Vase Birds Decor Blue Glass Sofina Boutique Kitzbuehel
By Sofina Boutique Kitzbühel
Located in Kitzbuhel, AT
Hand blown crystal vase/laterne in blue glass with birds sitting on a tree and leaves all around. The decor is hands free engraved and the glass bottom is hand-carved by glass artist...
Category

H 13 in. W 6.75 in. D 6.75 in.
Large Coalport Vase, Birds Head Handles, Flowers and Scale Blue, circa 1805
Located in Geelong, Victoria
Large Coalport vase, the classic form made extraordinary by large birds head handles rising to the lip with classical mask beneath, well decorated with panels of colorful flowers on ...
Category

Blue White Vase with Bird Gigi, circa 1960s by Robert and Jean Cloutier

H 14.77 in. Dm 8.27 in.
Pair of 20th Century Chinese Champlevé Enamel Vases on Stand with Bird Decor
Located in Dallas, TX
Decorate a mantel with this colorful pair of baluster vases; created in China circa 1960, each vase sits on a carved ebonized wood stand and features floral and bird motifs in rocky ...
Category

H 14 in. Dm 6 in.
Pair of 20th Century Chinese Cloisonné Enamel Vases on Stand with Bird Decor
Located in Dallas, TX
Decorate a mantel with this large pair of champlevé vases, created in China circa 1960, each baluster vase sits on a carved ebonized wood stand and features floral motifs and birds s...
Category

An assortment of bird vases is available at 1stDibs. Each of these unique bird vases was constructed with extraordinary care, often using ceramic, porcelain and glass. We have 88 antique and vintage bird vases in-stock, while there are 7 modern editions to choose from as well. Bird vases have long been popular, with older editions for sale from the 18th Century and newer versions made as recently as the 21st Century. Bird vases are generally popular furniture pieces, but Mid-Century Modern, Scandinavian Modern and Art Deco styles are often sought at 1stDibs. Bird vases have been a part of the life’s work for many furniture makers, but those produced by Sofina Boutique Kitzbühel, Timo Sarpaneva and Iittala are consistently popular.

How Much are Bird Vases?

Questions about Bird Vases
Prices for most bird vases on 1stdibs are negotiable. You’ll see a "Make an Offer" button on the item details page, indicating that the seller is willing to consider a lower price. It’s not uncommon for customers to get 15–25% off the list price after negotiating. See our tips for negotiating like a pro.
Only experienced, professional sellers who have applied and been thoroughly vetted by our team of experts can sell bird vases and other quality items on our site. Learn more about becoming a 1stdibs seller.
The 1stdibs Buyer Protection Guarantee provides coverage for qualified purchases in the unlikely event that the item arrives not as described or is damaged. We’ll work with you and the seller to find a resolution, ensuring your satisfaction. View details
We have partnerships with the world's best shipping providers to facilitate seamless and fully-insured delivery from the seller's location directly to you, wherever you are in the world. Our logistics team is comprised of dedicated members who arrange all the details with our partners, servicing and supporting all shipments. Learn more about shipping on 1stdibs.
For your convenience, we offer multiple payment methods, including all major credit cards and PayPal. For many purchases we also offer financing options or wire transfer. Learn more about payment options on 1stdibs.