H 1.78 in. Dm 1.62 in.
Lalique Peugeot and Lalique Feuilles Salt and Pepper Grinders, Set of Two
By Lalique, René Lalique
Located in New York, NY
In 1840, Peugeot launched the first coffee grinder, and eventually salt and pepper grinders. Peugeot grinding mechanisms carry a lifetime warranty. It was not before 1886 that Peugeo...
Category 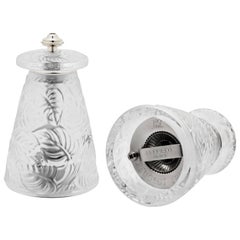 H 3.66 in. W 2.2 in. D 3.66 in.
Lalique Owl Cordial/Whiskey Tumbler in Clear Crystal
By Lalique, Marie-Claude Lalique
Located in New York, NY
Designed by Marie-Claude Lalique in 1995, the Owl collection has become synonymous with the enjoyment of fine spirits. The highly detailed design of the tumbler, inspired by the wise...
Category

H 7.76 in. Dm 2.62 in.
Lalique Enfants Set of Two Shot Glasses in Clear Crystal
By Lalique
Located in New York, NY
The sweet angelic face of cherubs inspired René Lalique to create the Enfants shot class in 1932. This stunning glass created from transparent and satin-finished crystal, depicts a c...
Category 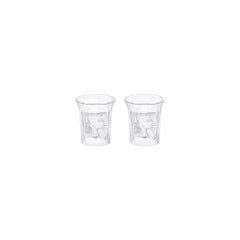 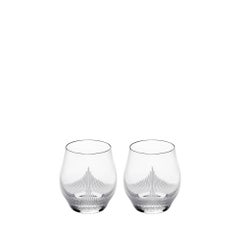 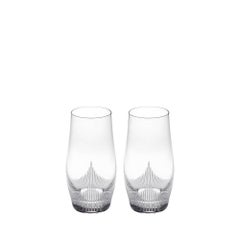 H 6.1 in. Dm 3.11 in.
Lalique 100 Points Set of Six Whiskey Tumblers in Clear Crystal
By Lalique
Located in New York, NY
With a name referring to the wine scoring system, 100 Points embraces a modern design and precise utility while exemplifying the established style of Lalique: an engraved frosted rib...
Category

H 3.98 in. Dm 3.54 in.
Stunning and Stylish French Art Deco Geometric Shape Glass Bowl by A. Hunebelle
By Andre Hunebelle, Roger Cogneville
Located in Lisse, NL
Striking design and top quality make Art Deco bowl. If you are a collector of rare and aesthetically pleasing works of Art (Deco) then this handcrafted piece by one of France's fine...
Category

H 6 in. W 15 in. D 6 in.
Silvered "Montgolfiere" Style Chandelier, Glass Beads Throughout, France, 1960
By Baccarat
Located in Merida, Yucatan
French chandelier, in silver gilt steel, beaded throughout all the metal work with cut glass beads. Made in France, circa 1960.
Category

H 6.7 in. W 16.15 in. D 13.59 in.
Smart French Art Deco Silver Plated Cocktail Shaker c.1930
Located in Bath, GB
A smart and elegant French cocktail shaker made from silver plate having been professionally cleaned and polished in our silversmith's workshop. The underside is fully marked by t...
Category

H 8.75 in. Dm 3.5 in.
French Deco Sterling Silver & Glass Traveling Perfume Bottle and Funnel
Located in North Miami, FL
This lovely Art Deco sterling silver raised overlay of a floral design over glass houses your favourite perfume for travel or in a glamorous evening bag. This has its original sterl...
Category

H 5.52 in. Dm 9.85 in.
Silver Plated Art Deco Bottle Holder, French, Circa 1930
Located in Marcq-en-Baroeul, FR
This nice Art Deco bottle holder is made of silver plate. This is a French work, circa 1930.
Category

H 2.37 in. W 3.15 in. D 1.58 in.
Important Art Deco Lidded Silver Pinch-Wasted Compote by Carrel, 1922
By Pierre Carrel
Located in Philadelphia, PA
One of the most astonishing early Art Deco silver pieces we have seen, this large silver and enamel lidded compote was smithed in 1922 by Pierre Carrel. The French were among the fir...
Category

H 9.5 in. W 18.5 in. D 18.5 in.
Striking Large French Art Deco Silver Plated Cocktail Shaker c.1930
Located in Bath, GB
A strong shape and good proportions make this striking cocktail shaker a handsome example to adorn the finest of bars. Made from silver plate, it has just returned from our silver...
Category

H 9.25 in. Dm 4 in.
Large French Art Deco Silver Plated Cocktail Shaker, circa 1930
Located in Bath, GB
A stunning large cocktail shaker just back from our silversmith's workshop where it has been professionally cleaned and polished, restoring it to it's former glory, dating to the 193...
Category

H 15.75 in. Dm 11.03 in.
Art Deco Silver Plate and Wood Pedestal Bowl French Vintage
Located in North Miami, FL
This French Art Deco silver plate pedestal dish or bowl with high gloss white lacquer disk base is great for a console or serving. The wood was redone from the walnut color. This is ...
Category

H 9.5 in. W 9.5 in. D 2 in.
Art Deco French Christofle / Alfenide Silver Plated Bread Basket, c.1930
Located in Bath, GB
A superb and very stylish Art Deco bread basket or bowl with wooden handles to either side. The underside is fully marked with the mark for the world famous Orfevrerie Christofle ...
Category

How Much is a Art Deco Silver French?

Prices for an art deco silver French can differ depending upon size, time period and other attributes — at 1stDibs, they begin at $78 and can go as high as $280,000, while the average can fetch as much as $1,636.

Art Deco furniture is characterized by its celebration of modern life. More than its emphasis on natural wood grains and focus on traditional craftsmanship, Art Deco furniture — which typically refers to pieces produced during the 1920s and 1930s — is an ode to the glamour of the “Roaring Twenties.” Widely known designers associated with the Art Deco style include Émile-Jacques Ruhlmann, Eileen Gray, Maurice Dufrêne and Jules Leleu.

The term Art Deco derives from the name of a large decorative arts exhibition held in Paris in 1925. “Art Deco” is often used broadly, to describe the work of creators in associated or ancillary styles. This is particularly true of American Art Deco, which is also called “Streamline Moderne” or “Machine Age” design.

Art Deco textile designers employed dazzling floral motifs and vivid colors, and while Art Deco furniture makers respected the dark woods and modern metals with which they worked, they frequently incorporated decorative embellishments such as exotic animal hides as well as veneers in their seating, case pieces and bedroom furniture. Today, the style is still favored by designers looking to infuse interiors with an air of luxury and sophistication.

On 1stDibs, browse Art Deco furnishings by designer, including works by Paul Follot and René Lalique, or by category, from angular chairs and sculptural burl wood tables to lighting and decorative objects.