Lalique Crystal Seville Console or Demi-Lune or Side Table 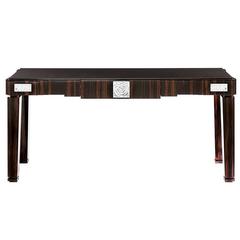 H 31.89 in. W 19.69 in. D 71.65 in.
Lalique Ivory Ash Console or Entryway Table with Masque de Femme Crystal Panel
By René Lalique
Located in New York, NY
The Masque de Femme panel created by René Lalique in 1935 to adorn a fountain embodies the imaginative power of its creator who was fascinated by women and nature. Both Classic and a...
Category 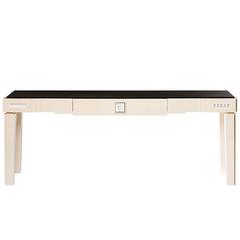 H 29.53 in. W 35.04 in. D 23.63 in.
Art Deco Console Table
By Louis Sognot
Located in North Miami, FL
Art Deco console table designed by Louise Sognot for Atelier Primavera, made of nickeled metal, black marble top and black lacquered wood base. Made in France Circa: 1930.
Category

H 31.25 in. W 24 in. D 11.75 in.
French Deco Style Console
Located in Washington, DC
Designer unknown, but clearly an idiosyncratic, almost Folk Art, riff on 1930s deco. Bought in the South of France. Originally one of a pair, which had unpolished pink granite tops (...
Category

H 31 in. W 42 in. D 12 in.
French Art Deco Iron and Mahogany Console Table
Located in New York, NY
French Art Deco iron & steel trimmed console table with a mahogany base supporting 3 iron scrolls on either side and a centered drawer under a rust marble top.
Category

H 36 in. W 63.75 in. D 14.5 in.
Art Deco Lacquered Console
Located in Los Angeles, CA
This 1960s French Modern Console is in great condition, made out of solid wood, and is covered with rosewood veneers stained in dark mahogany & black color combination with a newly l...
Category

H 41 in. W 38 in. D 19.75 in.
Art Deco French Consoles in Walnut with Brass Spheres
Located in Houston, TX
Pair of Art Deco French consoles in walnut A console is made out of fine quality walnut wood. The wide rectangular top is displaying a beauty of the wood. It is elevated by the 4 cu...
Category

H 38.59 in. W 23.71 in. D 11.89 in.
Art Deco Modernist Console, Sidetable
Located in Vosselaar, BE
Elegant French console side table from the Art Deco period, 1930s. The palisander finere is beautifully grained in a mirror outlay and craftily applied to the convex supports. Its di...
Category

H 22.83 in. W 43.3 in. D 21.65 in.
French Art Deco/ Modernist Cubist Console with Nickel Accents
Located in New York City, NY
A fabulous original French Modern petite console of open cube form, raised on stepped and fluted pediment base. The negative area created in the center serves as a viewfinder which f...
Category

H 32 in. W 67 in. D 13.5 in.
French Art Deco Steel and Marble-Top Console Table
Located in Houston, TX
Steel console with pierced, scrolled supports, the skirt decorated with Pierced ovals and a central panel of molded leaves, a compote-form Finial on the base, set with. Mauve and w...
Category

H 30.5 in. W 71 in. D 15.75 in.
Art Deco French Consoles in Macassar Wood with Brass Lines
Located in Houston, TX
Console is made out of Macassar wood. Table top is elevated by 3 curved wooden elements. They are stabilized with trapezoid base. On the back of the console there is wooden panel wit...
Category

H 32.5 in. W 27 in. D 9 in.
Single or Pair of French Art Deco/ Modernist Cubist Consoles
Located in New York City, NY
Price listed is per item . $5,600 each / $11,200 the pair A single or pair of fabulous original French modern petites consoles of open cube form, raised on stepped and fluted pedim...
Category

H 35.44 in. W 35.44 in. D 12.6 in.
Art Deco Burled Walnut and Mahogany Inlaid Console Table, France
Located in Hollywood, FL
The rectangular burled walnut top above square tapering legs with mahogany overlay and the leg sides inlaid in an "X" with mahogany.
Category

H 31.5 in. W 24.41 in. D 19.69 in.
20th Century French Art Deco Console with Marble Top
Located in Pasadena, CA
A remarkable French Art Deco console table. The break-fronted top with curved corners, made of white and pink-veined black marble, rests on an apron and legs of burl wood. The rectan...
Category

H 31.89 in. W 80.83 in. D 22.05 in.
Hammered Iron Art Deco "Serpent" Console with Onyx Top, France, 1930s
By Edgar Brandt
Located in Isle Sur La Sorgue, Vaucluse
Striking Art Deco console in hammered wrought-iron with a decorated with a snake on each leg. The tapering legs end in elegant outwardly upturned feet. The apron is decorated with a ...
Category

H 32.5 in. W 39.5 in. D 15 in.
Art Deco Triangular Console with Ebony Accents
Located in Oakland, CA
An Art Deco console with ebony accents. This is a generous size – with a deep surface and a fantastic stepped base supported by two curved pillars which support a highly grained and ...
Category

How Much is a Art Deco Console French?

An art deco console French can differ in price owing to various characteristics — the average selling price 1stDibs is $5,800, while the lowest priced sells for $1 and the highest can go for as much as $165,000.

The term Art Deco derives from the name of a large decorative arts exhibition held in Paris in 1925. Art Deco textile designers employed dazzling floral motifs and vivid colors, and while Art Deco furniture makers respected the dark woods and modern metals with which they worked, they frequently incorporated decorative embellishments in their pieces, such as exotic animal hides as well as veneers. Today, the style is still favored by designers looking to infuse interiors with an air of luxury and sophistication.

At 1stDibs, browse Art Deco furniture by designer, including works by Georg Jensen and René Lalique, or by category, from angular chairs and sculptural burl wood tables to lighting and decorative objects.

Finding the Right Console Tables for You

Few pieces of furniture are celebrated for their functionality as much as their decorative attributes in the way that console tables are. While these furnishings are not as common in today’s interiors as their coffee-table and side-table counterparts, console tables are stylish home accents and have become more prevalent over the years.

The popularity of wood console tables took shape during the 17th and 18th centuries in French and Italian culture, and were exclusively featured in the palatial homes of the upper class. The era’s outwardly sculptural examples of these small structures were paired with mirrors or matching stools and had tabletops of marble. They were most often half-moon-shaped and stood on two scrolled giltwood legs, and because they weren’t wholly supported on their two legs rather than the traditional four, their flat-backed supports were intended to hug the wall behind them and were commonly joined by an ornate stretcher. The legs were affixed or bolted to the wall with architectural brackets called console brackets — hence, the name we know them by today — which gave the impression that they were freestanding furnishings. While console tables introduced a dose of drama in the foyer of any given aristocrat — an embodiment of Rococo-style furniture — the table actually occupied minimal floor space (an attractive feature in home furniture). As demand grew and console tables made their way to other countries, they gained recognition as versatile additions to any home.

Contemporary console tables comprise many different materials and are characterized today by varying shapes and design styles. It is typical to find them made of marble, walnut or oak and metal. While modern console tables commonly feature four legs, you can still find the two-legged variety, which is ideal for nestling behind the sofa. A narrow console table is a practical option if you need to save space — having outgrown their origins as purely ornamental, today’s console tables are home to treasured decorative objects, help fill empty foyers and, outfitted with drawers or a shelf, can provide a modest amount of storage as needed.

The rich collection of antique, new and vintage console tables on 1stDibs includes everything from 19th-century gems designed in the Empire style to unique rattan pieces and more.