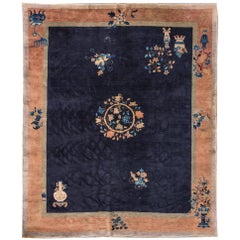 W 108 in. L 137 in.
Antique Blue Chinese Peking Rug, 1920
Located in Rome, IT
A fine early 1920 century indigo blue Peking rug. The rug is in traditional Peking design made in deep blue shade for the background with beige border around. It has a medallion in t...
Category

W 78 in. L 112 in.
Antique Fine Indigo Blue Chinese Geometric Design Rug
Located in Milan, IT
A very finely knotted antique Chinese rug in excellent condition, distinguished by a tone-on-tone Indigo blue palette and by a geometric pattern based on an infinite repeat, honeycom...
Category

W 108 in. L 138 in.
Antique Chinese Rug, Tan and Blue Oriental Handmade Wool Rug
Located in New York, NY
China has a long tradition of carpets and the original ones, probably used as merchandise, are dated at over 2000 years ago. The art of knotting carpets was however, introduced somew...
Category

W 109 in. L 137 in.
Fine Antique Peking Chinese Blue Open Field Rug
Located in Milan, IT
The fine carpets of Peking represent the other end of the spectrum of Chinese textile art, expressing a late Qing dynasty aesthetic that is based on very simple forms and color combi...
Category

W 94 in. L 117 in.
Antique Chinese Nichols Midnight Blue Wool Rug, ca. 1920
Located in Ferrara, IT
This is an antique Nichols rug woven in China during the beginning of the 20th century circa 1920’s and measures 260 x 165 CM in size. This carpet has an open field design with a dar...
Category

W 70 in. L 104 in.
Fine Antique Blue Peking Chinese Rug with Scrolling Lotus Flowers
Located in Milan, IT
A very finely woven antique Chinese rug woven in the Imperial workshops of Peking. Distinguished by an elegant pattern of scrolling lotus flowers on an indigo background, this type r...
Category

How Much is a Antique Blue Chinese Rug?

Paradise Is Found Underfoot in These Majestic Persian Textiles

Persian garden carpets, with their timeless beauty and unmatched craftsmanship, have an enduring appeal.

With their rich layers, intricate patterns and elaborate lighting, rooms with a Moroccan influence are easy to spot.

How to Choose the Right Area Rug for Your Space

How to Care for Your Antique or Vintage Rug

Surprise: the vacuum cleaner is your friend.