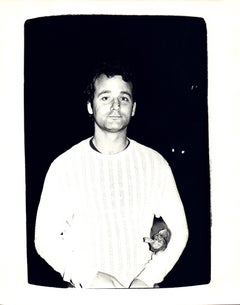 H 2.37 in. W 6.3 in.
Andy Warhol "One Dollar Bill"
By Andy Warhol
Located in Paris, FR
Andy Warhol 1 dollar bill circa 1985 dimension :15.5x6 cm signed by the artist on the front Andy Warhol watermark on the back perfect condition 1,490 euros
Category

Surely you’ll find the exact andy warhol bill you’re seeking on 1stDibs — we’ve got a vast assortment for sale. Making the right choice when shopping for a andy warhol bill may mean carefully reviewing examples of this item dating from different eras — you can find an early iteration of this piece from the 20th Century and a newer version made as recently as the 20th Century. If you’re looking to add a andy warhol bill to create new energy in an otherwise neutral space in your home, you can find a work on 1stDibs that features elements of black, pink, gray and more. Creating a andy warhol bill has been a part of the legacy of many artists, but those crafted by Andy Warhol are consistently popular. These artworks were handmade with extraordinary care, with artists most often working in paper, screen print and photographic paper.

How Much is a Andy Warhol Bill?

The name of American artist Andy Warhol is all but synonymous with Pop art, the movement he helped shape in the 1960s. He is known for his clever appropriation of motifs and images from popular advertising and commercials, which he integrated into graphic, vibrant works that utilized mass-production technologies such as printmaking, photography and silkscreening. Later in his career, he expanded his oeuvre to include other forms of media, founding Interview magazine and producing fashion shoots and films on-site at the Factory, his world-famous studio in New York.

Born and educated in in Pittsburgh, Warhol moved to New York City in 1949 and built a successful career as a commercial illustrator. Although he made whimsical drawings as a hobby during these years, his career as a fine artist began in the mid-1950s with ink-blot drawings and hand-drawn silkscreens. The 1955 lithograph You Can Lead a Shoe to Water illustrates how he incorporated in his artwork advertising styles and techniques, in this case shoe commercials.

As a child, Warhol was often sick and spent much of his time in bed, where he would make sketches and put together collections of movie-star photographs. He described this period as formative in terms of his skills and interests. Indeed, Warhol remained obsessed with celebrities throughout his career, often producing series devoted to a famous face or an object from the popular culture, such as Chairman Mao or Campbell’s tomato soup. The1967 silkscreen Marilyn 25 embodies his love of bright color and famous subjects.

Warhol was a prominent cultural figure in New York during the 1960s, ’70s and ’80s. The Factory was a gathering place for the era’s celebrities, writers, drag queens and fellow artists, and collaboration was common. To this day, Warhol remains one of the most important artists of the 20th century and continues to exert influence on contemporary creators.

More than three decades after his death, the prolific Pop artist and cultural icon's body of work continues to captivate. Here's a primer of some of his most notable motifs and mediums.

Who Are the Most Popular Artists on 1stdibs?

Learn the stories of some of the world's most recognizable artworks and their makers.