H 15.75 in. W 19.69 in. D 27.56 in.
Celsius 50 Coffee Table
Located in Milan, IT
A mesmerizing interplay of hues and clean shapes, this stunning coffee table is composed of a cylindrical brown marble base, and a large round MDF top rising on a sturdy vertical top...
Category

H 20.87 in. Dm 23.23 in.
50s Cesare Lacca Coffee Table for Cassina
By Cassina, Cesare Lacca
Located in Amstelveen, Noord
Lacca designed a great many serving trolleys and coffee tables in his career-which make up a large proportion of what is available on the vintage market today-as well as magazine rac...
Category

H 13.78 in. W 47.64 in. D 18.12 in.
Large Coffee Table Year 50 Jean Prouvé Style
Located in charmes, FR
Large coffee table from the 1950s, in very good condition, base identical to the "aeronautical" model table from proven jeans but of different size, prototype?, bench base?
Category

H 17.33 in. W 36.23 in. D 18.51 in.
DeCastelli Nicola 50 Coffee Table in Stainless Steel Top by IvDesign
By IVDESIGN, DeCastelli
Located in New York, NY
Decisive geometries for a table characterized by the superimposition of three apparently-contrasting elements. The robust cross-shaped base anchors the structure to the ground while ...
Category 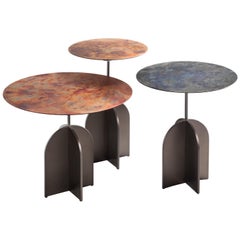 H 17 in. W 36 in. D 18 in.
MidCentury Modern Italian Resin and Brass Coffee Table by Poliplastica MALP, 50s
Located in Cerignola, Italy Puglia
Extraordinary example of mid-century Italian craftsmanship. It was built in the late 1950s by the company Poliplastica M.A.L.P. of Rimini, Italy. The surface is in resin even if the ...
Category

H 16.93 in. W 39.38 in. D 19.69 in.
DeCastelli Alchemy 50 Coffee Table in Copper with Stainless Steel Base by Stormo
By DeCastelli
Located in New York, NY
Alchemy is an ancient art whose main goal was to convert humble metals to precious ones, using an esoteric language to give materials a metaphysical quality. The Alchemy collection w...
Category

H 19.69 in. W 13.78 in. D 13.78 in.
70s George Mathias Coffee Table with Etched Artwork by Maho Nr 12/50
By George Mathias 1
Located in Amstelveen, Noord
George Mathias furniture was produced in limited quantities in the mid 1970's to the early 1980's. He worked with artists in France and Belgium like Roger Vanhevel, producing very at...
Category

H 19.69 in. W 19.69 in. D 19.69 in.
1950s IN-50 Low Table by Isamu Noguchi for Herman Miller
By Herman Miller, Isamu Noguchi
Located in Sagaponack, NY
An early IN-50 low table having the original triangular shaped thick glass top resting on a birch pivoting base.
Category

1950s IN-50 Low Table by Isamu Noguchi for Herman Miller

H 16.75 in. W 50 in. D 36.5 in.
Flight Contemporary low-Coffee Table, 70x50 cm White silvered glass
By Sabrina Landini
Located in Pietrasanta, IT
This table is an art contemporary piece, made entirely by hand in Tuscany Italy, 100% of Italian origin. The special silver plating treatment, performed over the years by Sabrina,...
Category

H 15.75 in. W 19.69 in. D 27.56 in.
50 of the World's Best Apartments Coffee Table Book
Located in North Hollywood, CA
Is apartment living the way of the future? According to some, it's the only way to live. For most apartment-dwellers, beautiful views, functional floor plans, low maintenance and con...
Category

French Coffee Table from the 50´s

H 25.25 in. W 24 in. D 24 in.
A 50's Italian Occasional Table
By Fontana Arte
Located in London, GB
An Italian occasional table in green glass.
Category

H 18 in. Dm 35 in.
Organic '50s low table
Located in Milan, IT
Organic oak and glass low table, manufactured in Italy in the '50s. The wooden structure needs restoring (as shown in the picture of the legs).
Category

H 17 in. W 40 in. D 20 in.
"Emirate" Coffee Table,1/50 by Artist Craftsman, Jeff Muhs.
By Jeff Muhs
Located in Bellport, NY
Muhs is largely known for his work as a painter, and has exhibited in galleries, collections and museums nationwide. Muhs takes a fresh look at 50’s modern furniture in his new "Emi...
Category

IN-50 coffee table designed by Isamu Noguchi for Herman Miller

H 17.72 in. W 24.02 in. D 24.02 in.
Important Dutch Design Of The 50s Ceramic Chrome And Wood Coffee Table
Located in Halluin, FR
Important coffee table of the 50s consisting of a ceramic tray (in excellent condition: no blows or cracks) signed Vigneron AND a chromed steel structure highlighted by solid wood. T...
Category

Jansen Table With Black Lacquered Table From The 50's