H 25.6 in. W 29.53 in. D 1.97 in.
20th Century Oil Painting on Canvas Signed Landscape of the Italian Coast
Located in Bosco Marengo, IT
Beautiful painting circa 1940 signed in the lower right author not recognized. Subject the coast of Noli Italy realized technique oil on canvas. Excellent pictorial quality made ext...
Category

H 28.35 in. W 32.29 in. D 2.37 in.
20th Century Italian Oil Painting Mountain Landscape with Frame
Located in Bosco Marengo, IT
Beautiful Italian Mountain landscape. Oil on cardboard made in the early decades of the 20th century. Including of frame.
Category

H 18.9 in. W 15.36 in. D 1.97 in.
20th Century Italian Oil Painting on Canvas Winter Landscape
Located in Bosco Marengo, IT
Beautiful winter landscape with snow. Oil on canvas made in the early decades of the 20th century. Including of frame.
Category

H 14.57 in. W 11.82 in. D 1.97 in.
20th Century Italian Oil Painting on Cardboard by Luigi Bosio, 1920s
By Luigi Bosio
Located in Bosco Marengo, IT
Beautiful refined oil painting on cardboard signed at the back Luigi Bosio (1896-1959). Refined landscape dating back to the early decades of the 20th century with the same period fr...
Category

H 20 in. W 30 in. D 2 in.
"American Lynx" Oil Painting by Peter Darro
By Peter Darro
Located in Coeur d'Alene, ID
(1997). Original oil on canvas; 24" x 30". Lynx in autumn forest. Peter’s studio was in Chicago and, unlike many, was a painter since boyhood, later being recognized as a designated ...
Category

Oil Painting circa 1930s Figures on a Path

H 20 in. W 30 in. D 2 in.
"Take Off" Original Oil Painting by Peter Darro
By Peter Darro
Located in Coeur d'Alene, ID
( - 1997), original oil on canvas; 24" x 36". Peter’s studio was in Chicago and, unlike many, was a painter since boyhood, later being recognized as a designated official American Fi...
Category

H 24 in. W 36 in. D 2 in.
"the Pursued" Original Oil Painting by Peter Darro
By Peter Darro
Located in Coeur d'Alene, ID
( - 1997). Original oil on canvas; 16" x 24". Large whitetail buck with nose up. Peter’s studio was in Chicago and, unlike many, was a painter since boyhood, later being recognized a...
Category

H 16 in. W 24 in. D 2 in.
"Girl with Swan" Original Oil Painting by Peter Darro
By Peter Darro
Located in Coeur d'Alene, ID
(-1997). Original oil on canvas; 24" x 36". Girl with swan. Peter’s studio was in Chicago and, unlike many, was a painter since boyhood, later being recognized as a designated offici...
Category

H 14.57 in. W 18.51 in. D 1.58 in.
Japan Inviting "Stroll Along Shore at Sunset" Oil Painting Signd S. Akiyama
Located in Shelburne, VT
An intriguing well drawn and composed Japanese impressionist oil on board of a captivating "Stroll Along Shore At Sunset". The whole painted in vibrant blues, pinks and grey colors, ...
Category

H 9.5 in. W 13 in. D .2 in.
Martha Walter Ellis Island Oil on Panel, Signed
By Martha Walter 1
Located in Washington Crossing, PA
Inpouring of the Unqualified. Ellis Island. Oil on panel. 16'' x 20''. Signed lower right. One of series of 27 from Ellis island. Born in Philadelphia in 1875, Martha Walter attende...
Category

H 16 in. W 20 in. D 1 in.
Horses Oil Painting, Signed
Located in Somis, CA
An oil on canvas painting depicting a group of horses in motion. The horses are majestic with realistic expressions. Their muscles and facial features are well defined. They have bea...
Category

H 33.08 in. W 25.2 in. D 1.38 in.
20th Century Oil Painting Depicting a Landscape
Located in Opole, PL
We present you a big oil canvas depicting a landscape. All kept in the brown-beige color tone. The painting is signed (the signature is unidentified). It is closed in a profiled w...
Category

H 34 in. W 40 in. D 3 in.
Mid-20th Century Oil Painting on Board Nude
Located in Lambertville, NJ
Oil painting on board of a standing female nude in profile. Impressionist style, artist-signed and dated 1965 in a later silver giltwood frame.
Category

H 34.65 in. W 46.86 in. D 3.15 in.
20th Century Oil Painting View from Venice Gondolas Oil of Canvas
Located in Berlin, DE
Wonderful view from the city venice Fine painting with many details View from the buildings and gondolas The signature is unreadable Oil of canvas (S-217).
Category

20th Century Oil Painting, Before the Fonatana the Porta Fulba

H 16 in. W 20 in. D 2 in.
20th Century Oil Painting on Canvas Theater Scenery, France, 1965-1970
Located in Prato, Tuscany
Oil painting on canvas, the painter has depicted a theatrical set, setting it in a Roman archaeological site, she has schematized the whole landscape, but recognizes the Temple of M...
Category

H 39.38 in. W 47.25 in. D 1.58 in.
20th Century Oil Painting of Still Life with Native American Artifacts
Located in Van Nuys, CA
An oil painted still life on canvas board of Southwestern Native American artifacts on a flat surface, including a Kachina Doll, a basket, a terra cotta pot, and a weaving. It is fr...
Category

H 24 in. W 15 in. D 0.5 in.
20th Century Oil Painting Palace of Queen of Naples, Venetian Coastal Landscape
Located in Berlin, DE
Motif: Palace of the Queen of Naples. Venetian coastal landscape in the sunset. Evening mood on the Mediterranean coast with a picturesque town between high cypress trees. Very atm...
Category

20th Century Oil Painting after "The Calling of St. Matthew" by Caravaggio

H 28.35 in. W 24.41 in. D 1.97 in.
Blue Eyed Couple with Eye Glasses, Photo-Realistic 20th Century Oil Painting
Located in Van Nuys, CA
This representational double portrait of a couple is signed with initials "MN" in the lower left corner, by an unidentified artist. It is a flat, washed out image, perhaps painted by...
Category

H 13 in. W 16.50 in. D 2 in.
20th Century Oil Painting on Wood Board of Venice, Italy, Signed on the Reverse
Located in Van Nuys, CA
A small, framed, oil painting on board. Signed on the reverse by artist, possibly Polulzi, and titled "Les Portigue ole Dogi Venise". Very likely a painting done for tourists in the ...
Category

20th Century Oil Painting on Wood Board of Venice, Italy, Signed on the Reverse

H 9.50 in. W 13.25 in. D 1 in.
20th Century Munteanu Gheorghe Oil Painting
Located in Prato, Tuscany
20th century, oil painting " In the yard " 1968 of the Moldavian Munteanu Gheorghe painter, teacher of artistic disciplines at the I. Repin School of Fine Arts in Chisinau and member...
Category

H 20.87 in. W 17.33 in. D 1.97 in.
20th Century Naturalist Oil Painting Haldenthor in Aarau
Located in Berlin, DE
Design: Haldenthor in Aarau. View of a medieval town on a small river with Gothic buildings and old towers in the background old mill, as well as half-timbered houses in Dutch style....
Category

How Much are 20th Century Oil Paintings?

Questions About 20th Century Oil Paintings
Prices for most 20th century oil paintings on 1stdibs are negotiable. You’ll see a "Make an Offer" button on the item details page, indicating that the seller is willing to consider a lower price. It’s not uncommon for customers to get 15–25% off the list price after negotiating. See our tips for negotiating like a pro.
Only experienced, professional sellers who have applied and been thoroughly vetted by our team of experts can sell 20th century oil paintings and other quality items on our site. Learn more about becoming a 1stdibs seller.
The 1stdibs Buyer Protection Guarantee provides coverage for qualified purchases in the unlikely event that the item arrives not as described or is damaged. We’ll work with you and the seller to find a resolution, ensuring your satisfaction. View details
We have partnerships with the world's best shipping providers to facilitate seamless and fully-insured delivery from the seller's location directly to you, wherever you are in the world. Our logistics team is comprised of dedicated members who arrange all the details with our partners, servicing and supporting all shipments. Learn more about shipping on 1stdibs.
For your convenience, we offer multiple payment methods, including all major credit cards and PayPal. For many purchases we also offer financing options or wire transfer. Learn more about payment options on 1stdibs.

More Than Ever, the Female Design Council Is Embracing Funked-Up Creativity 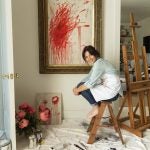 A former lawyer, Karina Gentinetta has achieved second-act success as a furniture gallerist and painter.