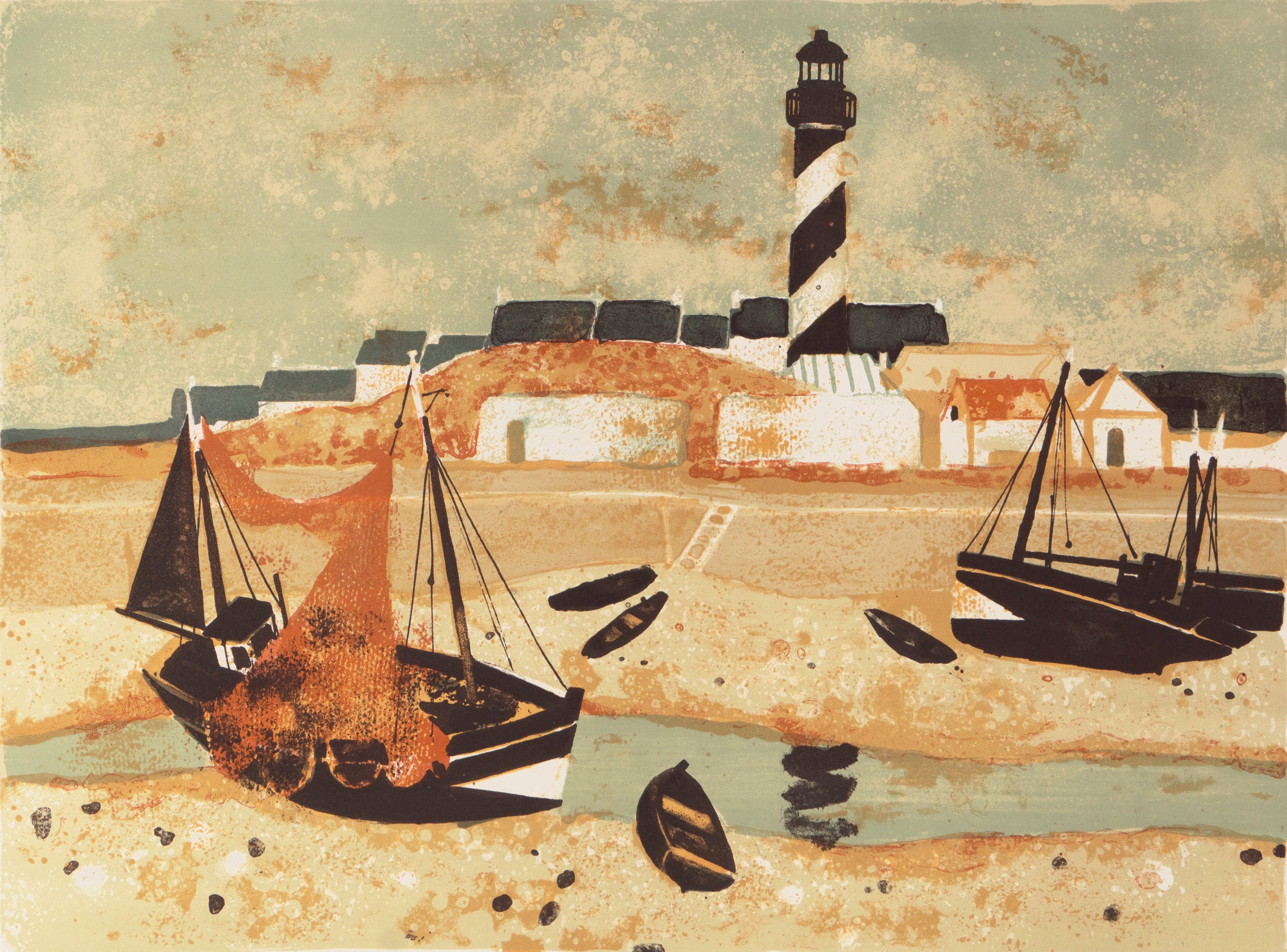 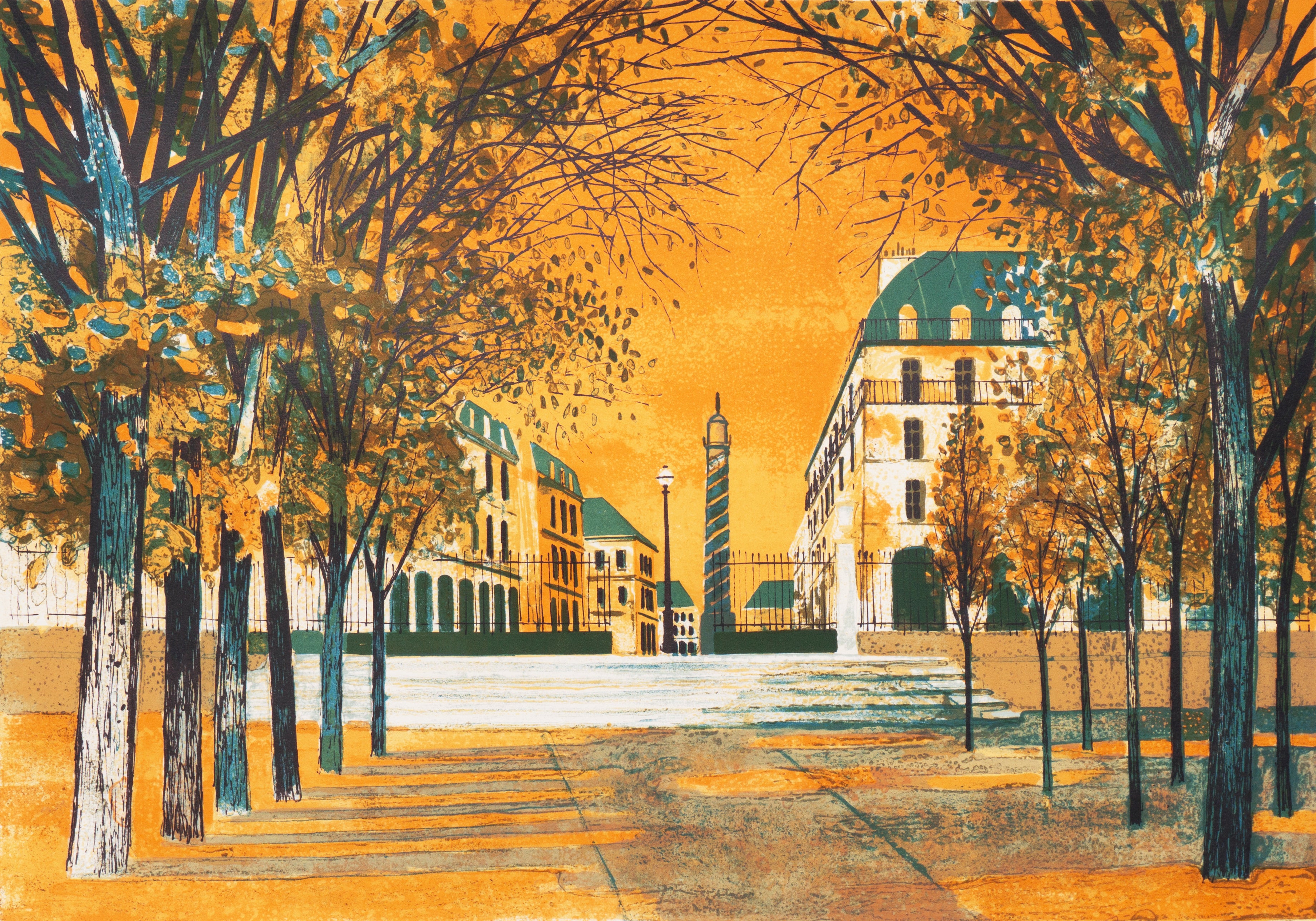 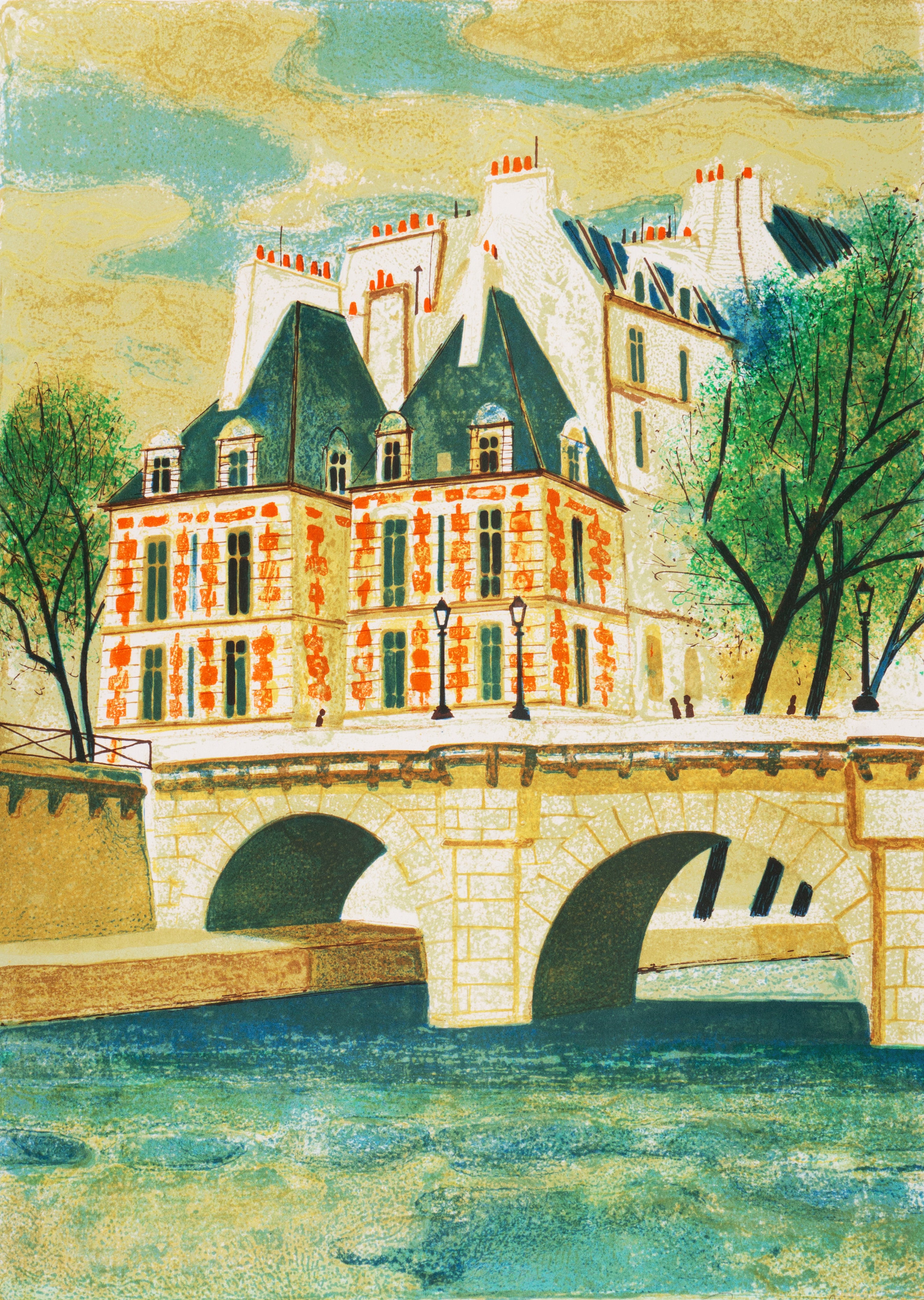 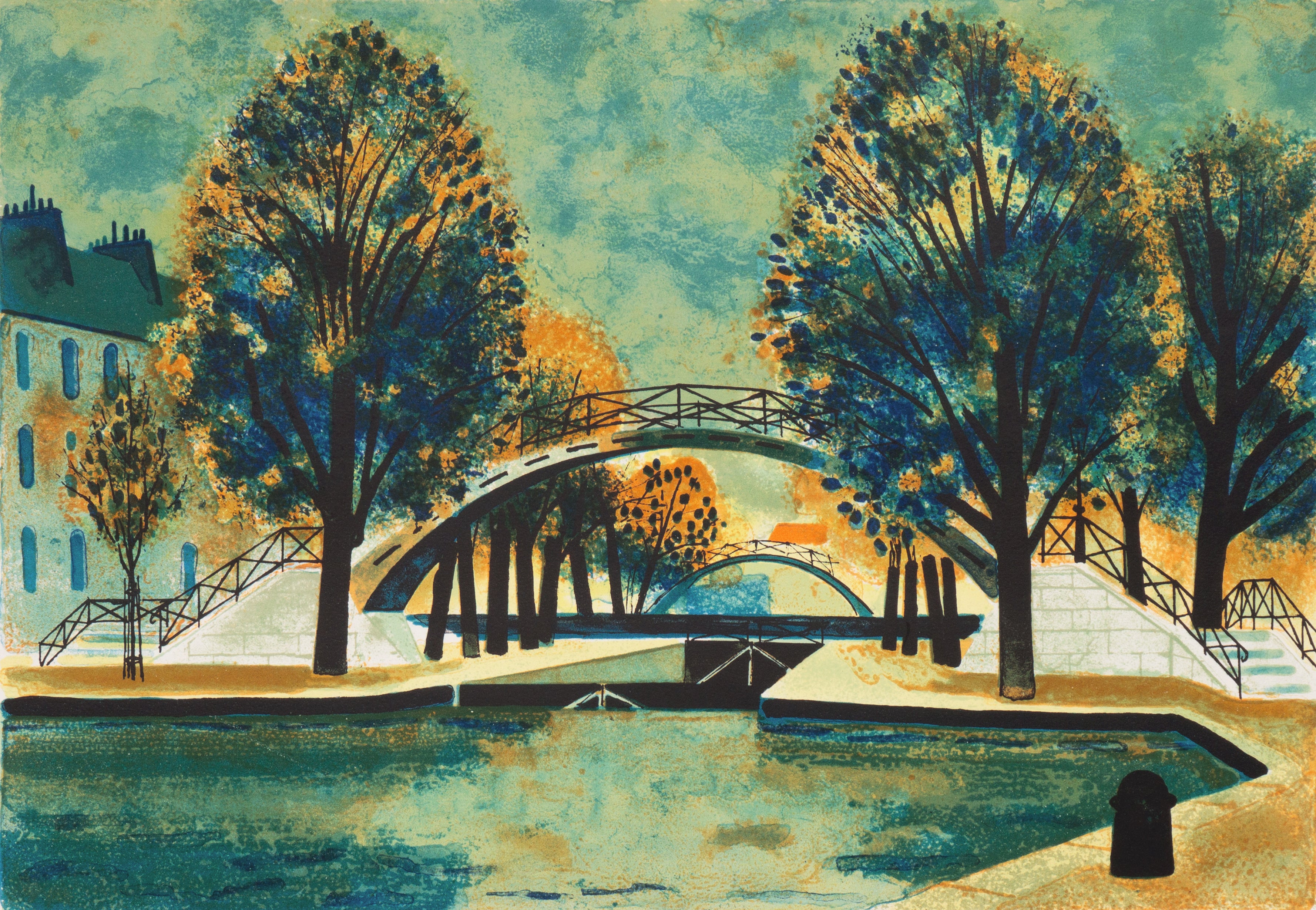 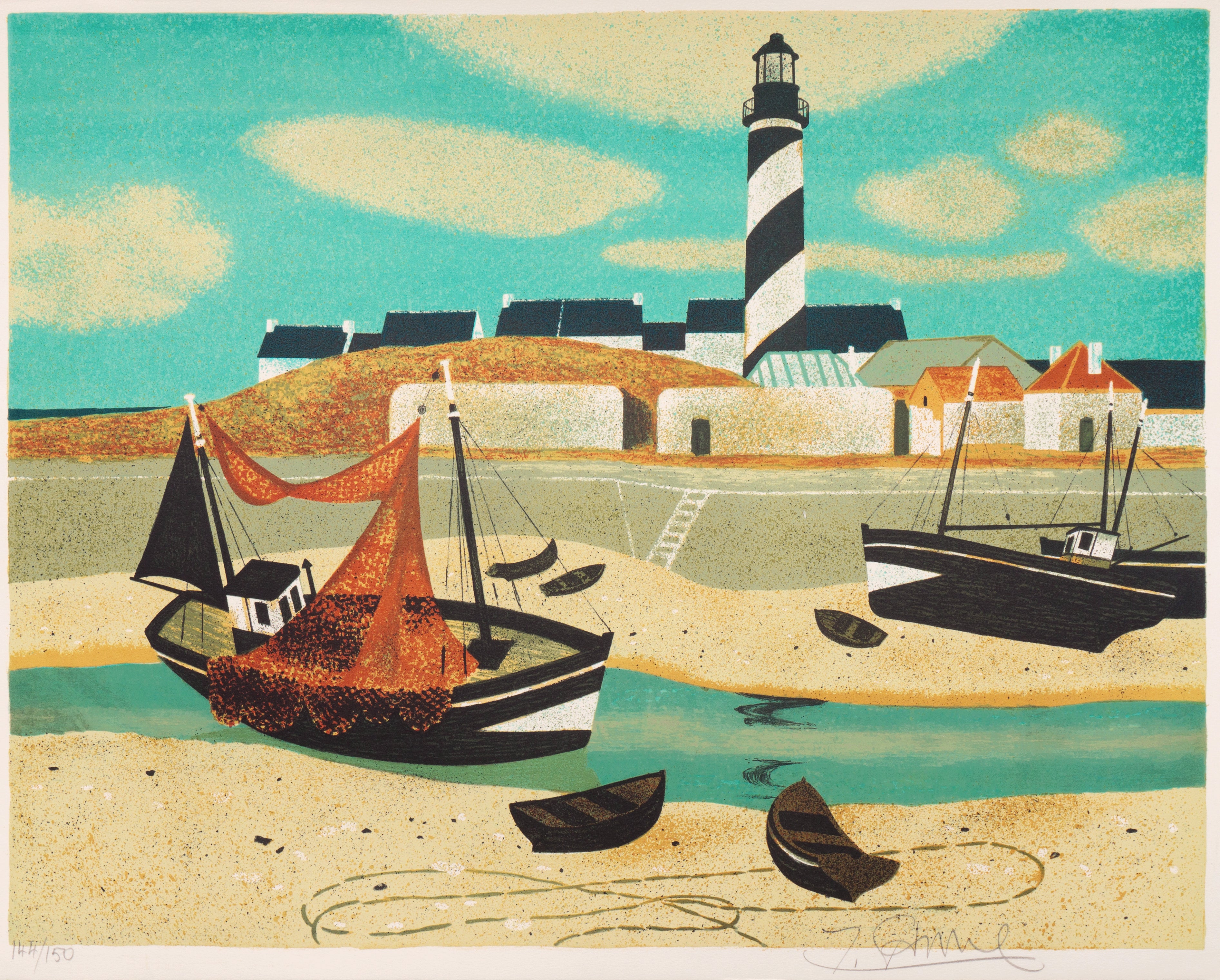 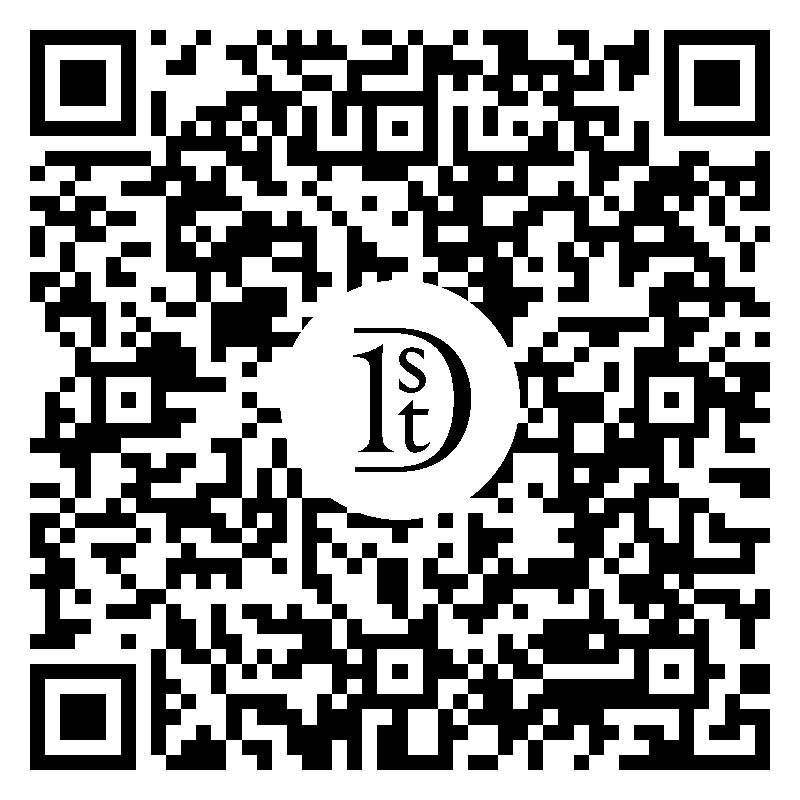 Signed lower right, 'Y. Ganne' for Yves Ganne (French, b. 1931), inscribed lower left with number and limitation, '87/150' and created circa 1975. Born in Anjou, Ganne first studied at the Ecole des Beaux-Arts in Nantes and, subsequently, with Fernand Léger in Paris. He received his first critical attention at the public exhibition of the Prix de la Jeune Peinture in 1950, and was awarded the prestigious Prix de la Ville de Menton later the same year. Ganne held his first solo exhibition in 1954 at Drouant David's in Paris, where he was granted a second one-man show in 1957. He exhibited internationally with success and was the recipient of numerous medals, prizes and juried awards. His works have been acquired by the French Government and may be found in the permanent collections the City of Paris and the Musée d'Art Moderne, in Paris, among others. The artist is well listed in relevant art reference works including Benezit's, Dictionnaire des Peintres. Sheet Dimensions: 21 H x 29.5 W Inches Reference: E. Benezit, Dictionnaire des Peintres, Sculpteurs, Dessinateurs, et Graveurs, Jacques Busse, 1999 Nouvelle Édition, Gründ 1911, Vol. 5, p. 848; et al.

Yves Ganne was born in Angers, Anjou, France in July of 1931. He studied at the École des Beaux-Arts of Nantes and with Fernand Léger in Paris. Ganne first received critical notice at the exhibition of the “Prix de la Jeune Peinture” in 1950 and was awarded the Prix de la Ville de Menton in the same year. He is listed in the French-language Benezit Dictionary of Artists as School of Paris. Ganne had his first Paris exhibition in 1954 at Drouant David's, where he exhibited again in 1957. He exhibited in London at Tooth and Son's and in several group shows in France and abroad. Ganne's vividly colored landscapes and still life pieces have been acquired by the French government, the City of Paris and the Musée d'Art Moderne in Paris. 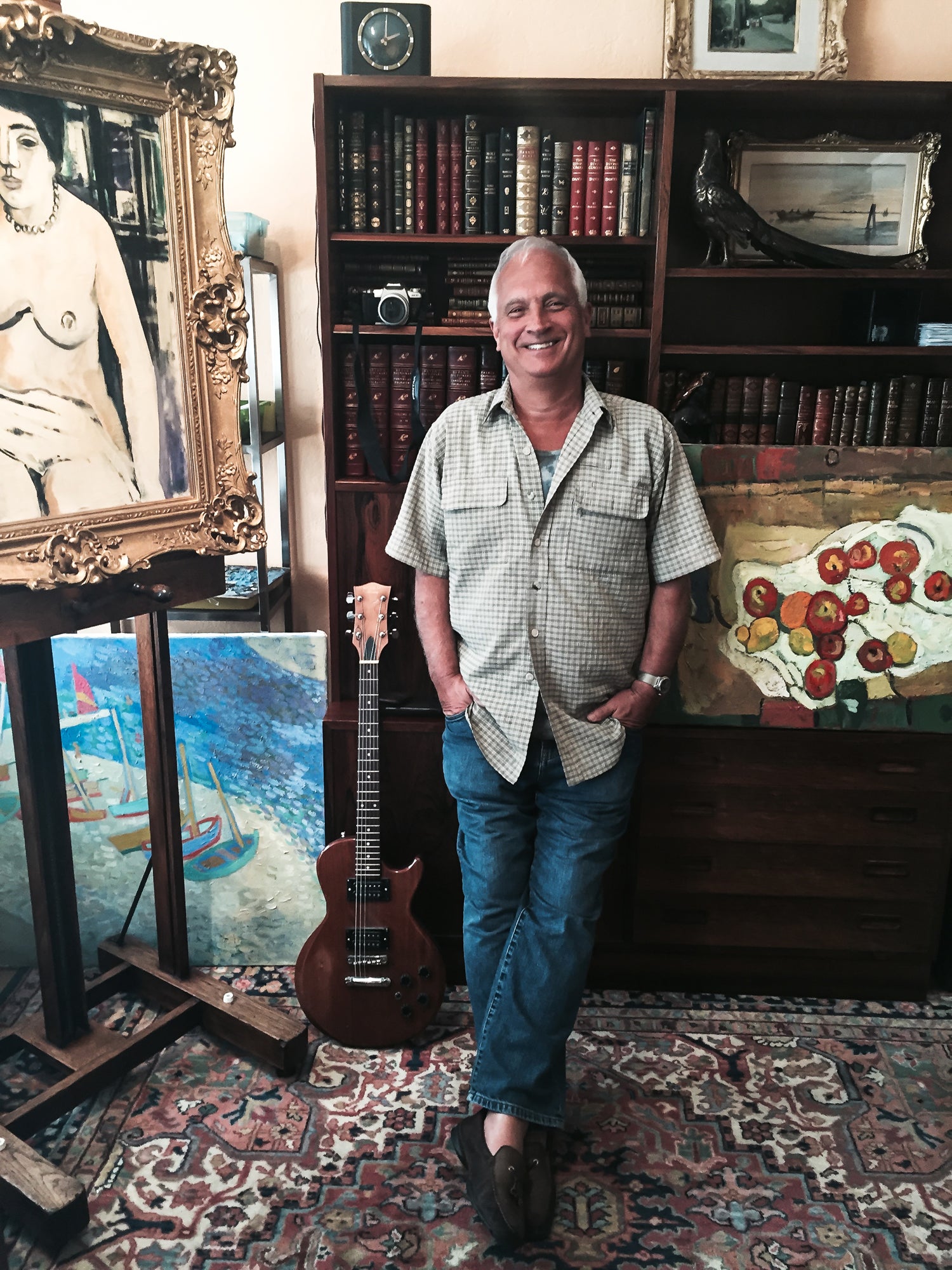 About the Seller
5 / 5
Located in Santa Cruz, CA
Platinum Seller
These expertly vetted sellers are 1stDibs' most experienced sellers and are rated highest by our customers.
Established in 1984
1stDibs seller since 2013
319 sales on 1stDibs
Typical response time: 1 hour
More From This Seller
View All From Seller

Flowers and Fruit in Front of the Window - School of Paris
By Yves Ganne
Located in Soquel, CA
Brightly colored lithograph by Yves Ganne (French, b. 1931). Signed "Y. Ganne" in the lower right corner. Numbered "19/260" in the lower left corner. Presented in a tan mat with a re...
Category

$2,100
Le Pont (The Bridge)
By Pierre Bonnard
Located in Boston, MA
Bouvet 66. Trial proof showing variation in the foreground, most noticeably the presence of a dog. From the series "Some Scenes of Parisian Life" published by Vollard. With collector...
Category