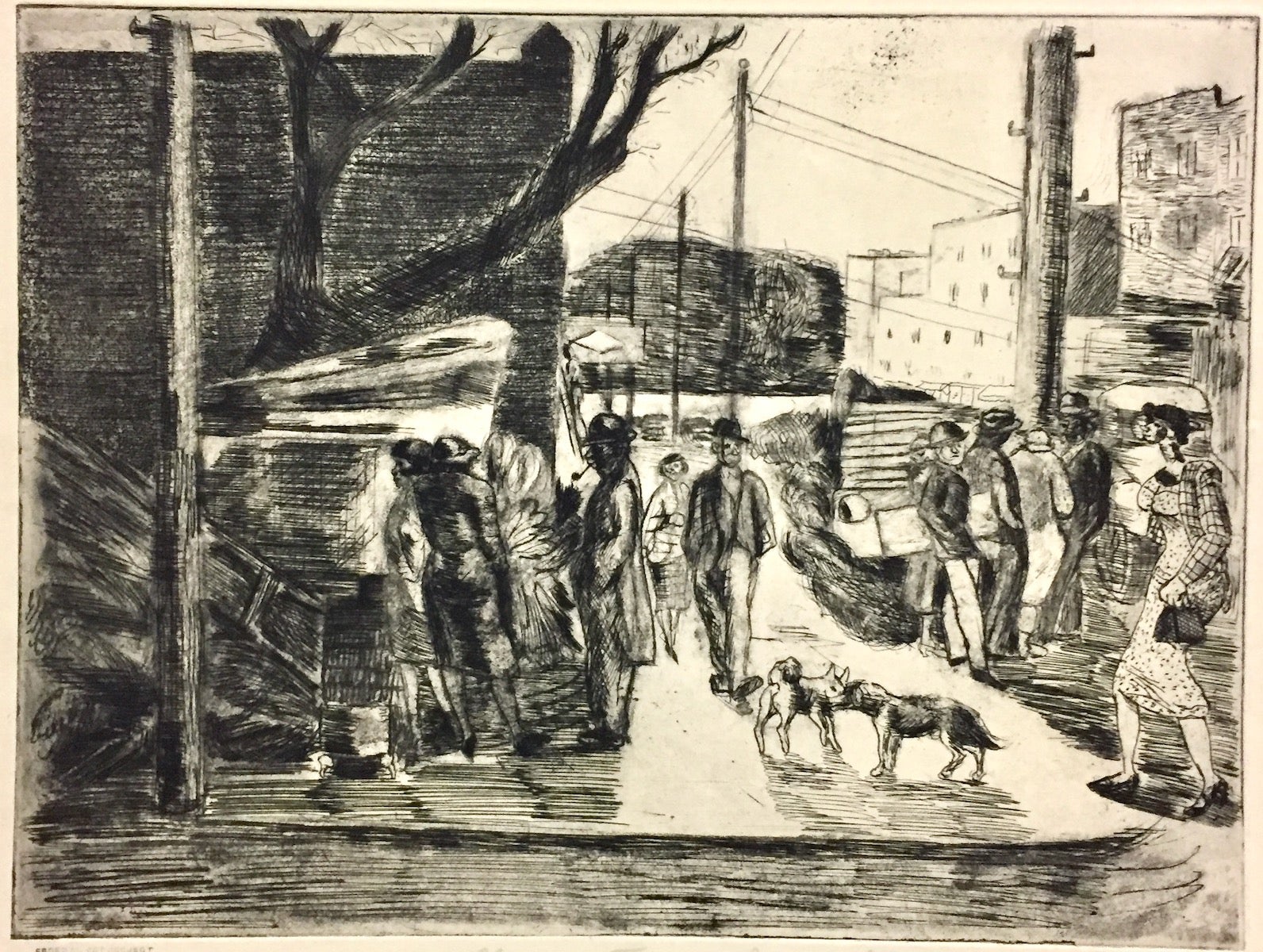 Joseph Pennell - The Biggest of All; Telephone and Telegraph Building. 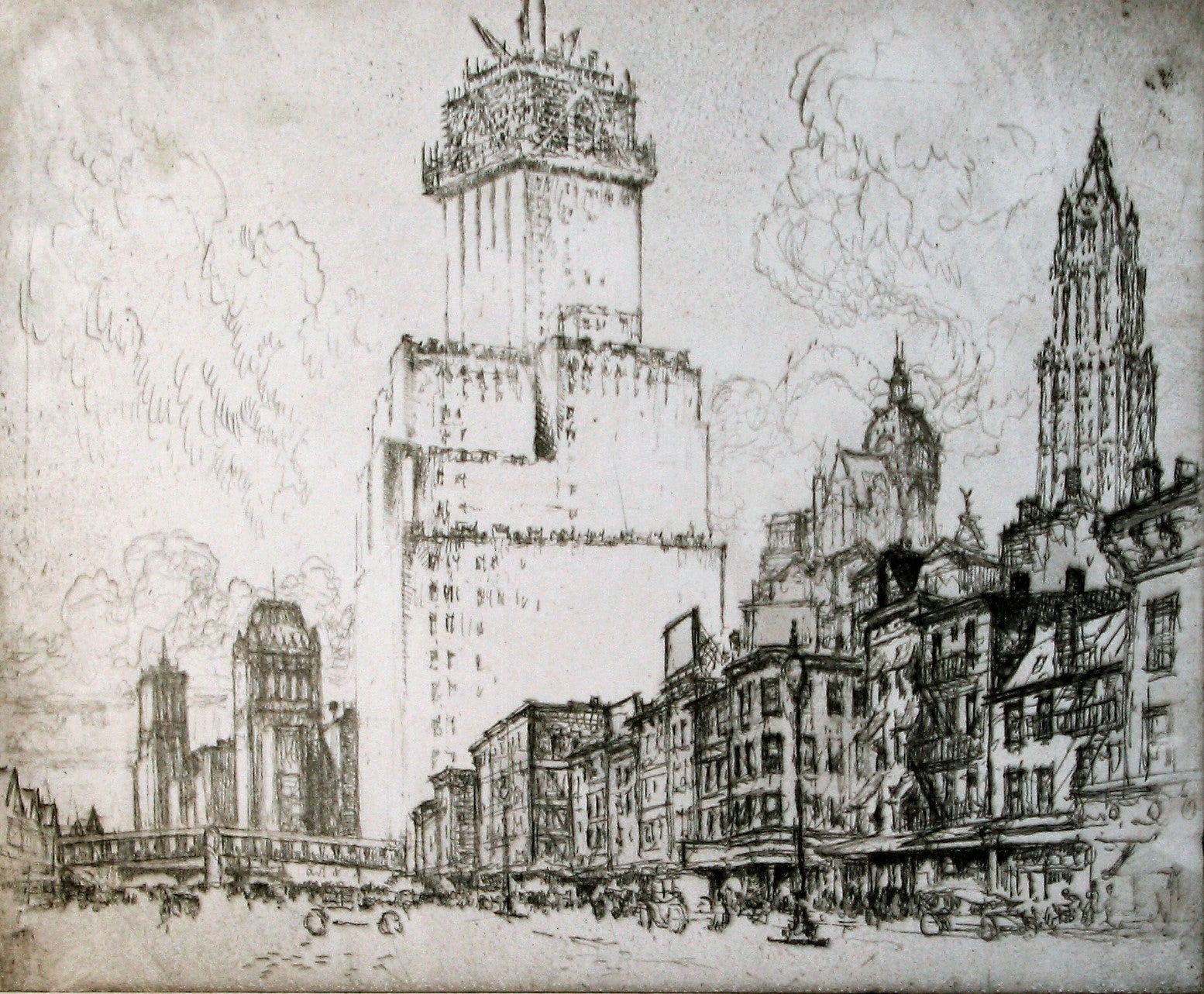 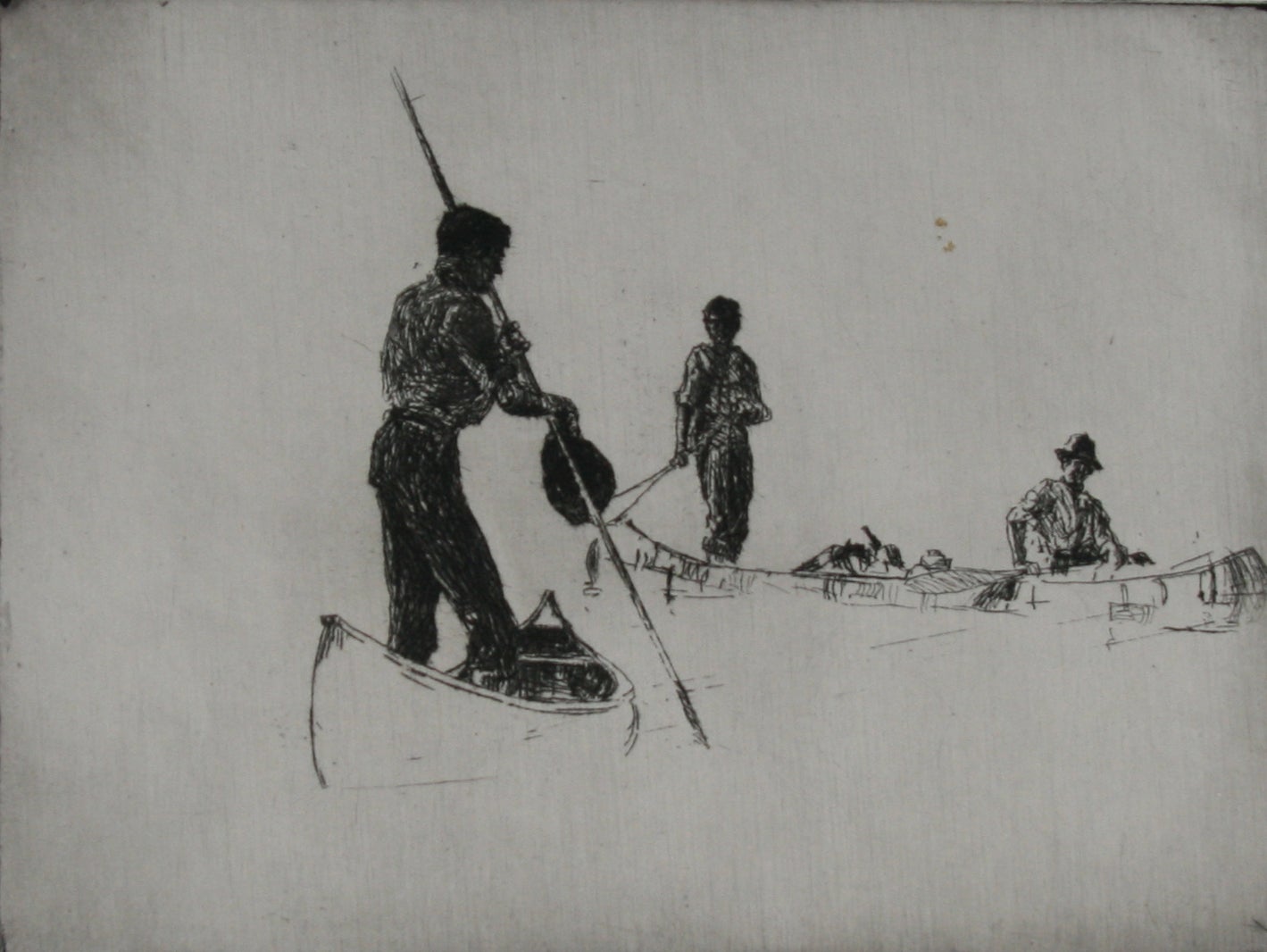 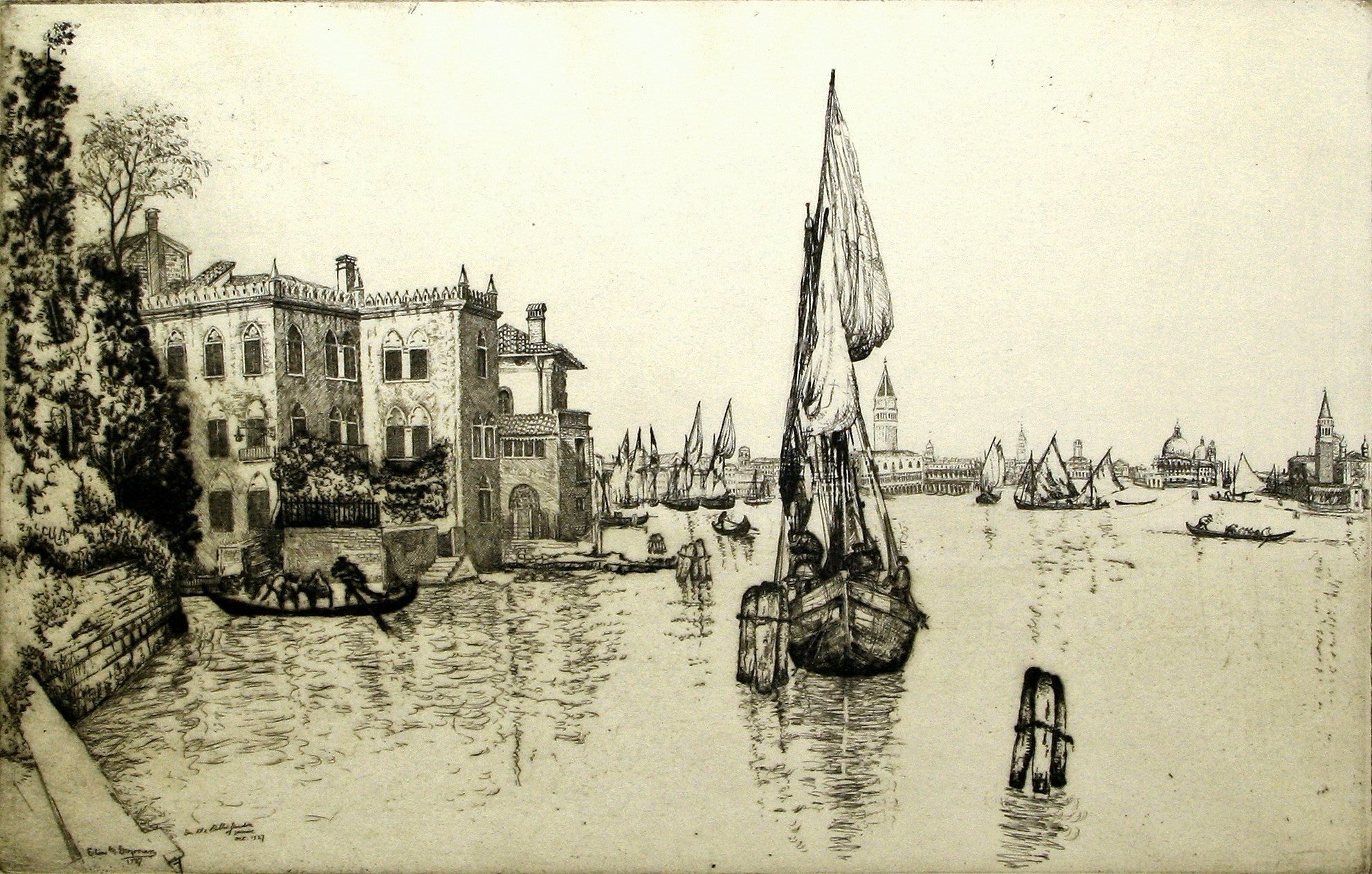 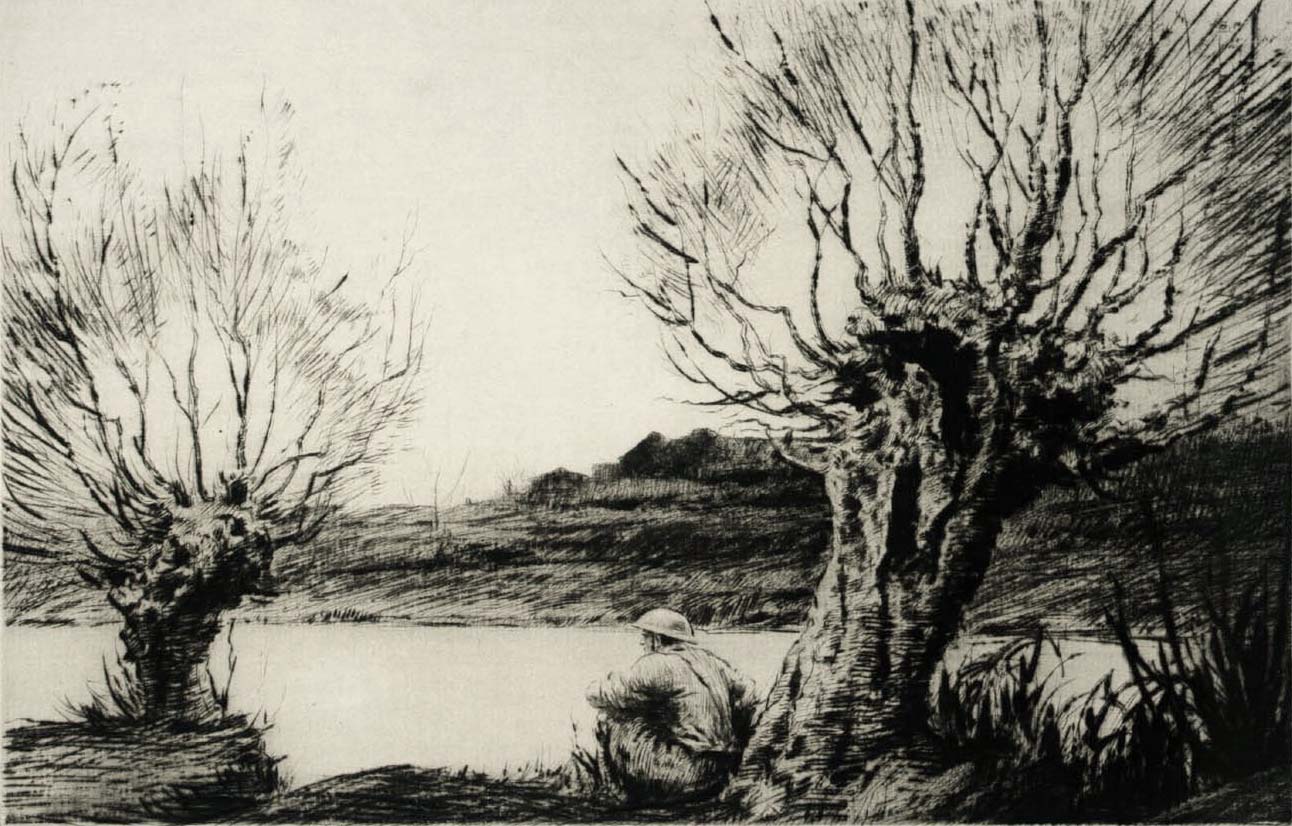 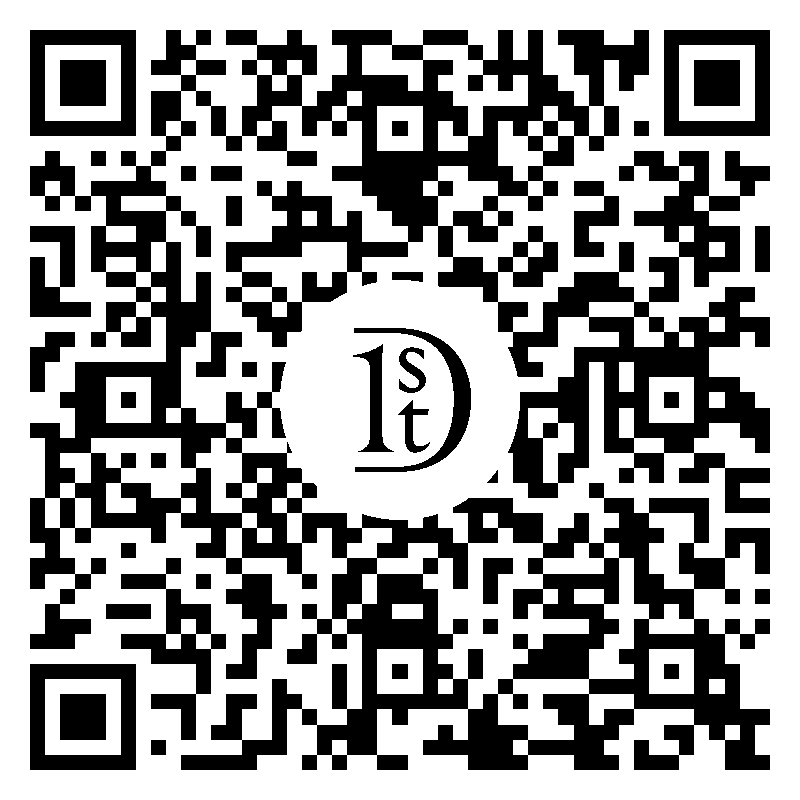 This is a limited edition etching with drypoint, that Wayne Thiebaud worked on back in 1979 with Crown Point Press in San Francisco and then printed later in 1998 with Daria Sywulak who has been a Master Printer at Crown Point Press since 1987. This is edition number 18 and is in excellent condition, framed with 99% UV glass. Wayne Thiebaud is known for his paintings of cakes and confectionary, particularly through the last half of the 20th century, when mass consumerism obsessed artists in America. Thiebaud spent much of his life in San Francisco and was fascinated by the buildings and streets. He worked with Crown Point Press to translate some of his drawings into etchings, not particularly because he wanted to reproduce his work, but more for the quality of line that an etching plate can achieve. “There’s nothing really that I’ve ever found in other lines that is like an etched line–its fidelity, the richness of it, the density. You just don’t get that any other way.” Wayne Thiebaud

Wayne Thiebaud’s pastel-hued still-life paintings of baked goods, gumball machines, hot dogs and paint cans are often associated with the Pop art movement, thanks to the mass-cultural appeal of their content. Stylistically, however, Thiebaud eschews the precision found in the art of such Pop giants as Roy Lichtenstein and Andy Warhol in favor of a more painterly approach, not unlike that of the Italian modernist Giorgio Morandi, whose dreamy paintings of vessels and household objects are simple yet richly atmospheric.


Thiebaud was born in Mesa, Arizona, in 1920 and grew up in Southern California from the age of six months. As a high schooler, he had a summer apprenticeship at Walt Disney Studios, which led to a stint as a graphic artist in the U.S. Army Air Forces’ First Motion Picture Unit during World War II. After the war, he attended the California State College at Sacramento on the G.I. Bill, graduating with a bachelor’s degree in 1951 and earning a master’s soon after. He went on to teach at the University of California, Davis, from 1960 to ’91.


In the late ’50s, time spent living in New York City proved crucial to Thiebaud’s career. There, he befriended Abstract Expressionist painters Willem de Kooning and Franz Kline and drew inspiration from the work of Jasper Johns and Robert Rauschenberg. Admiring the color and form on display in New York’s many bakeries, he began painting small canvases featuring rows of treats, which would become one of his central subjects. Though Thiebaud himself doesn’t identify as a Pop artist, the first major exhibition that brought him national renown was a seminal 1962 Pop show at the Sidney Janis Gallery in Manhattan. That same year, he was included in "New Painting of Common Objects” at the Norton Simon Museum of Art at Pasadena, which also featured paintings by Ed Ruscha and Jim Dine. Iconic works such as Pie Counter (1963) demonstrate Thiebaud’s signature treatment of commonplace items with the grandeur and scale of a landscape.


Thiebaud’s interest in exaggerated colors and vernacular subject matter — characteristics that call to mind images found in mid-century advertising — make him an intriguing figure occupying the hazy borderlands between fine and commercial art. Yet through a masterful handling of paint, evocative use of light and poignant sense of isolation, Thiebaud’s work is unquestionably thoughtful and singular. His later forays into landscape painting, as seen in Steep Street (1989) or Country City (1988), bring to bear his bold use of color on complex urban scenes.


Pieces by Thiebaud can be found in the collections of major museums, including the Whitney Museum of American Art, the Los Angeles County Museum of Art, and the Hirshhorn Museum and Sculpture Garden, among many others. In 1994, he was awarded the National Medal of Arts by President Bill Clinton. 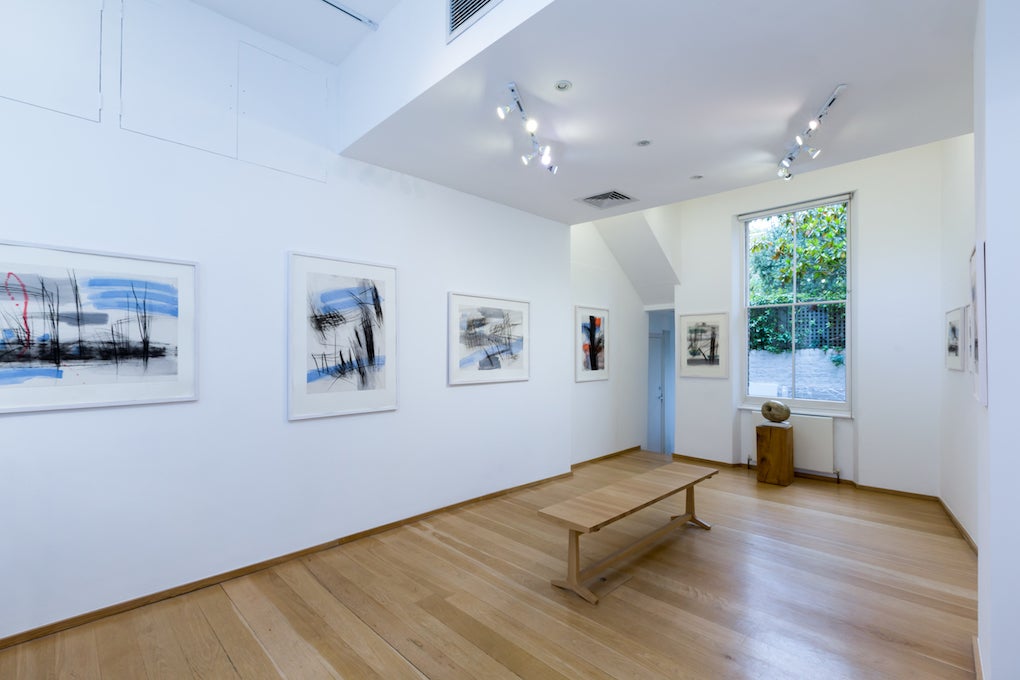 About the Seller
5 / 5
Located in London, United Kingdom
Gold Seller
These expertly vetted sellers are highly rated and consistently exceed customer expectations.
Established in 2009
1stDibs seller since 2018
38 sales on 1stDibs
Typical response time: 1 hour
More From This Seller
View All From Seller

Christmas Trees on Second Street (NYC)
Located in New York, NY
Philadelphia-born Irving Guyer attended the Art Students League and worked in New York City before moving to California. This print is signed and titled in pencil and has the stamp o...
Category

Joseph Pennell
The Biggest of All; Telephone and Telegraph Building., 1925