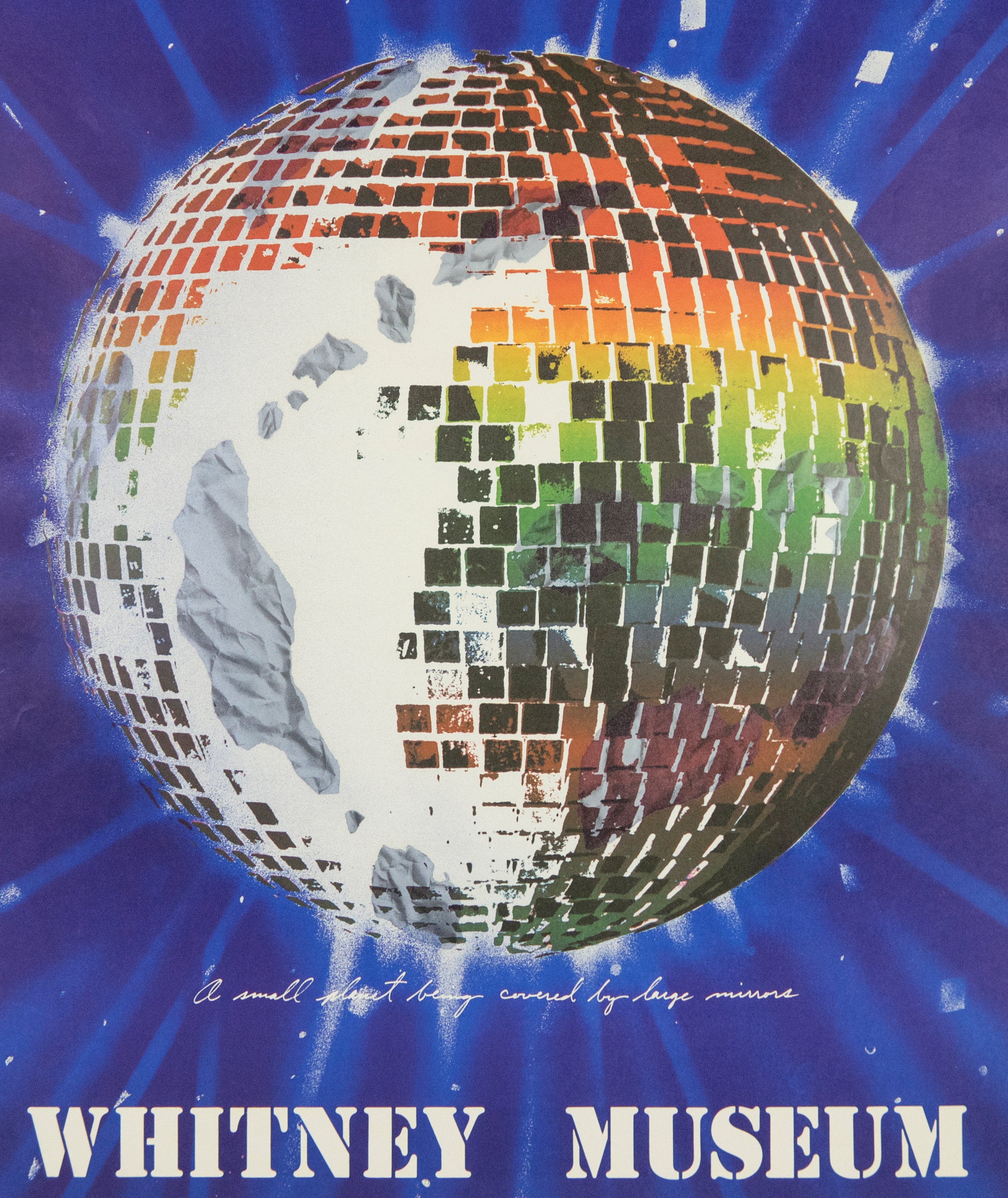 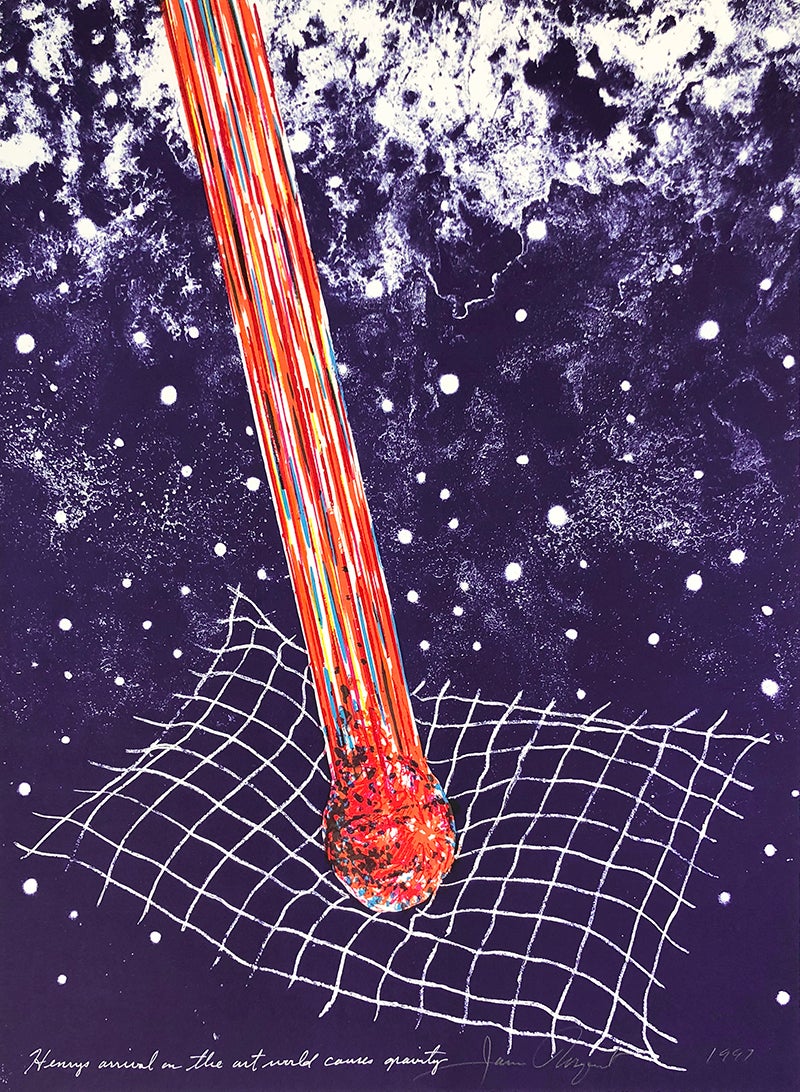 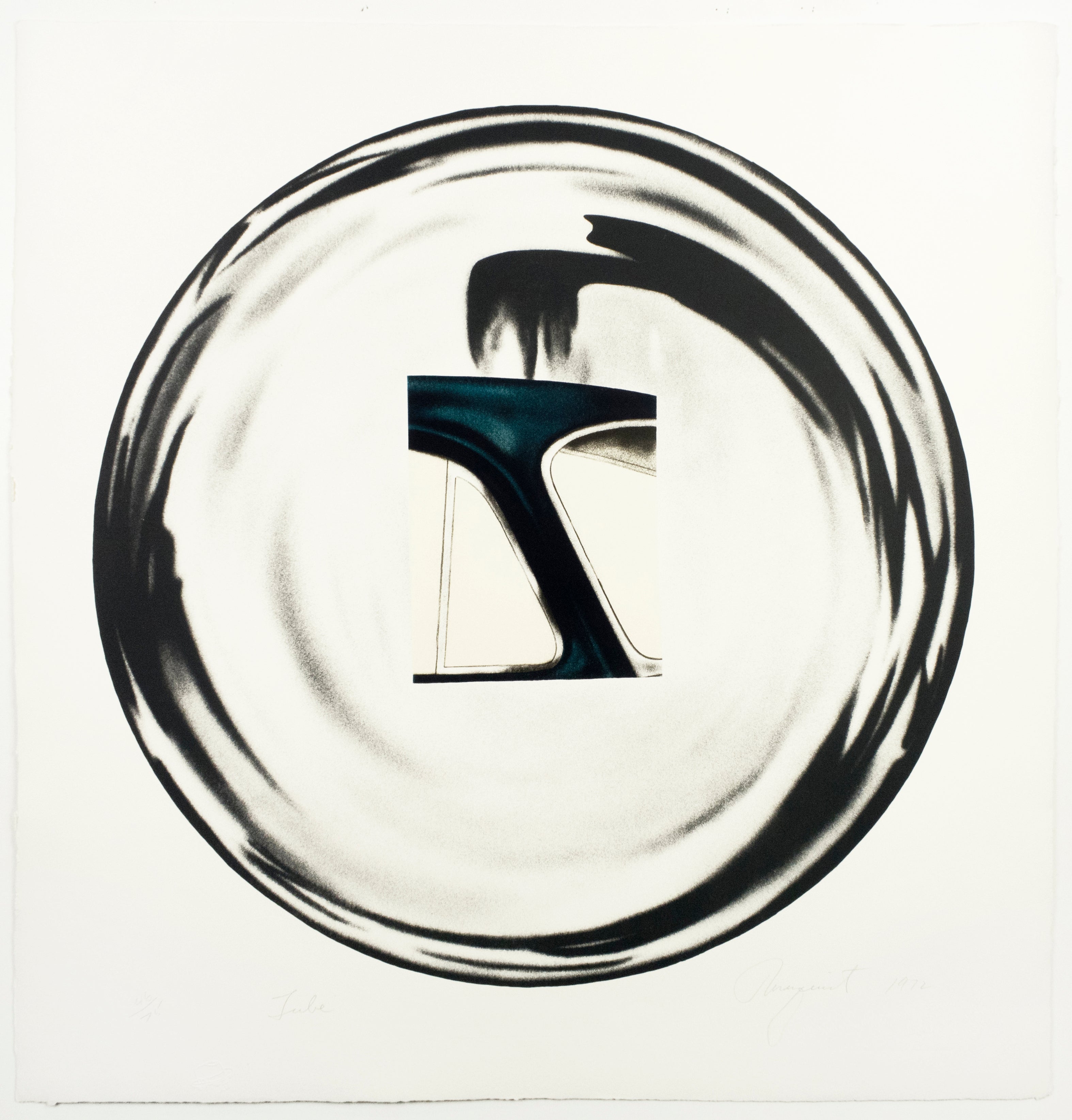 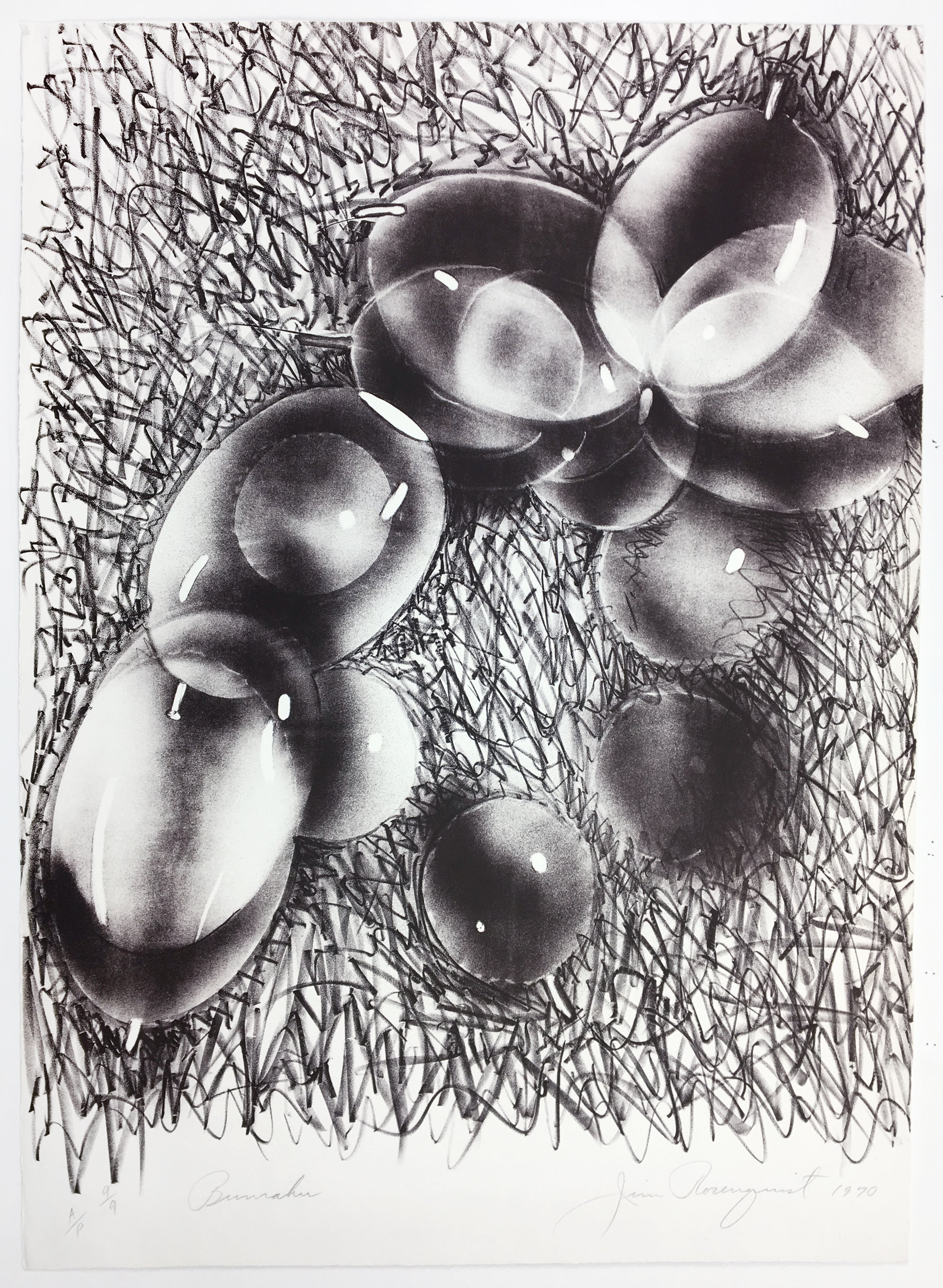 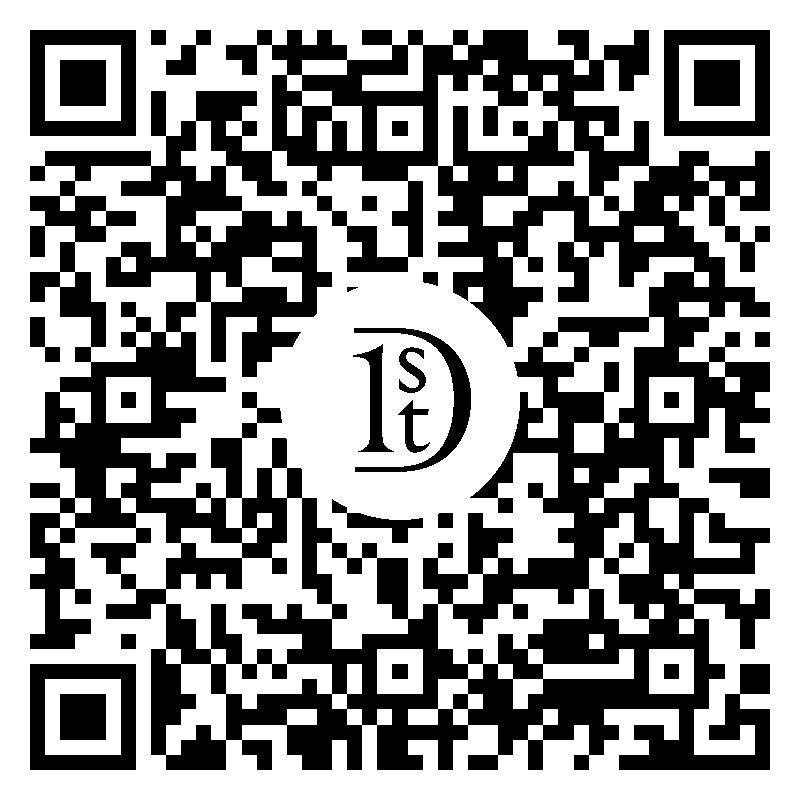 Silhouetted by the night sky, a brimmed hat perches on its stand, hovering above red-speckled ground like an aircraft. The moon shines bright white, and subtle clouds gather at the horizon. The artist's name is emblazoned in yellow and outlined in bright red. Poster reads "Rosenquist Complete Litographs 1965 - 1972 Galleria del Milione Milano via Bigli 21, 7 novembre - 7 dicembre" Reproduced from Rosenquist’s 1970 lithograph Delivery Hat, which is one from a series of lithographs he made in Florida which were inspired by the moon landing. This vintage poster was printed on a high quality paper stock and comes directly from our Petersburg Press archive. It is not pre-owned.

Although he insisted that he and his fellow Pop artists developed their art-making styles independently, American painter James Rosenquist belonged at the table with Andy Warhol and Roy Lichtenstein. Known for his distinctive use of visual montage, Rosenquist produced large, vibrantly colored tableaux marked by fragmentation and overlap. He often employed familiar motifs and objects drawn from popular contemporary culture — hot dogs, lipstick tubes, American flags — which he manipulated to form disorienting compositions whose constituent elements are nearly unrecognizable.


Born in North Dakota to Swedish parents, Rosenquist was encouraged to pursue painting by his mother, who was also an artist. He studied painting for two years at the University of Minnesota, but dropped out at the age of 21 to attend the Art Students League in New York on a scholarship. A job as a billboard painter in the late 1950s set him up to pursue his signature style, which borrowed its bold graphics and remixed kitschy aesthetic from the visual vocabulary of advertising. Works like Flamingo Capsule (1983) embody his trademark visual dissonance, drawing cigarette-ad motifs into conversation with stripes from the American flag and aluminum foil wrappers.


In addition to enormous paintings, Rosenquist created drawings, prints and collages. The 2011 lithograph The Memory Continues but the Clock Disappears is a montage of melting clocks and confetti, all submerged in a pool of water. While wryly hinting at the inevitability of decay and deterioration — suggesting that life is a ticking clock — the composition also alludes to Salvador Dalí's signature motif, the defining symbol of Surrealism. Such compositions demonstrate how Rosenquist masterfully combined seemingly incongruous elements into a harmonious and poetic whole. 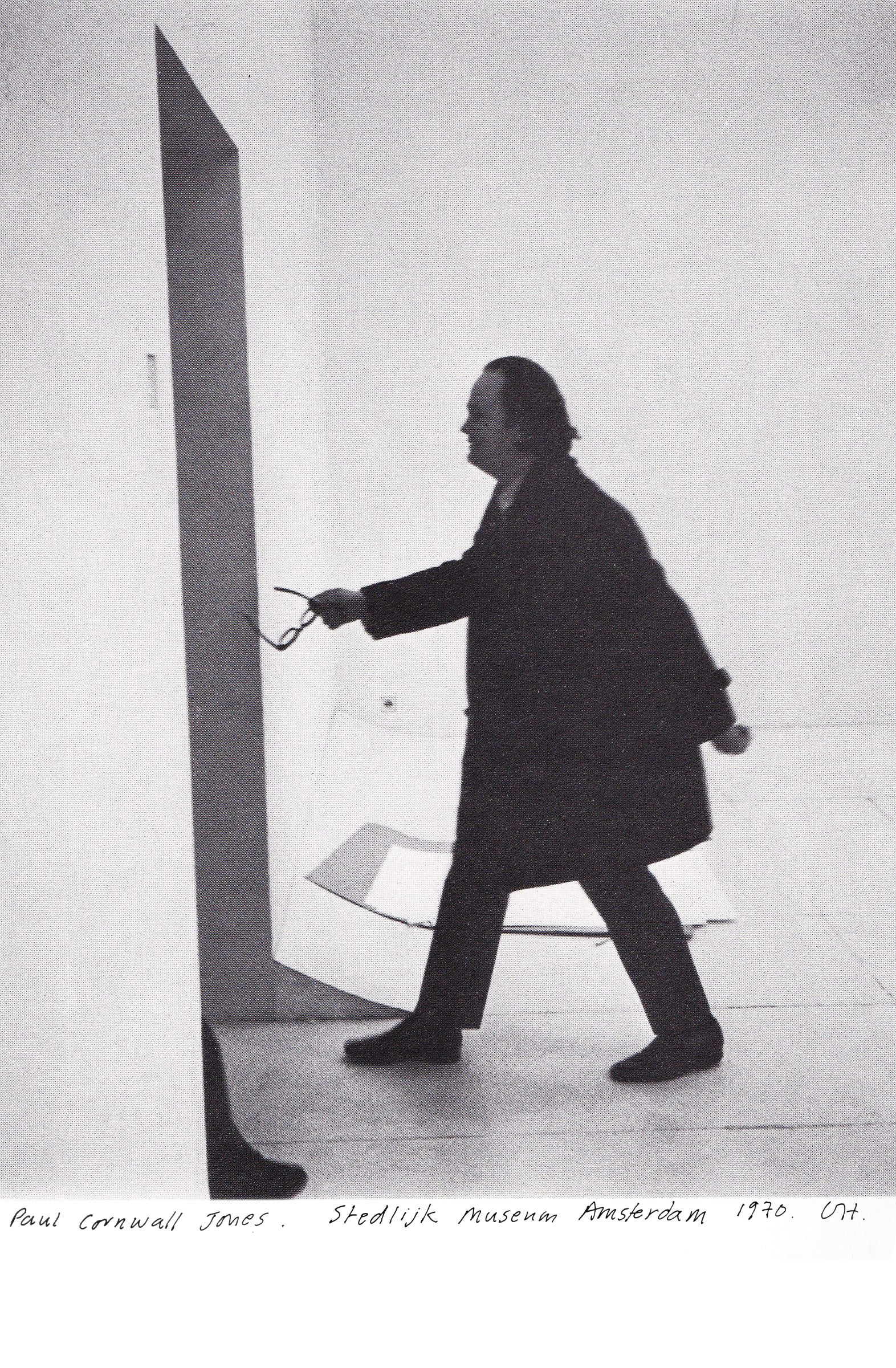 About the Seller
4.9 / 5
Located in New York, NY
Platinum Seller
These expertly vetted sellers are 1stDibs' most experienced sellers and are rated highest by our customers.
Established in 1968
1stDibs seller since 2019
88 sales on 1stDibs
Typical response time: 1 hour
More From This Seller
View All From Seller

James Rosenquist
A Pale Angel’s Halo, from: Reality and Paradoxes, 1973

James Rosenquist
"Process: An Exhibition and Sale of International Prints", 1973

$3,213
Vintage Poster British Pop Art 1972 Munich Olympic Swimmer R.B. KItaj
By Ronald Brooks Kitaj
Located in Bal Harbour, FL
Swimming Poster: Published and printed in Germany by Olympia Edition. signed in the plate this is not mounted to linen or backed. has never been framed. It depicts an African (Africa...
Category