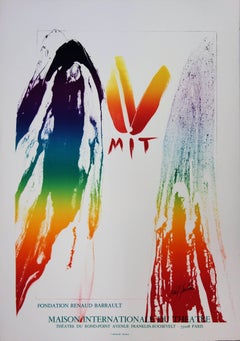 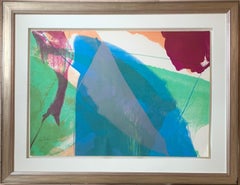 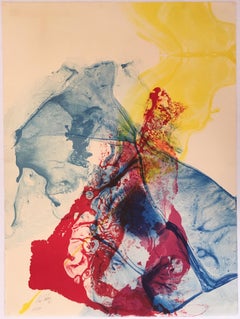 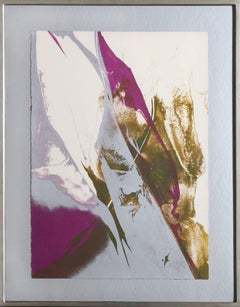 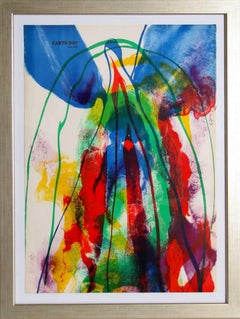 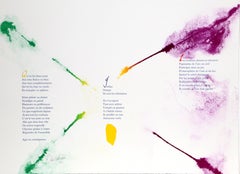 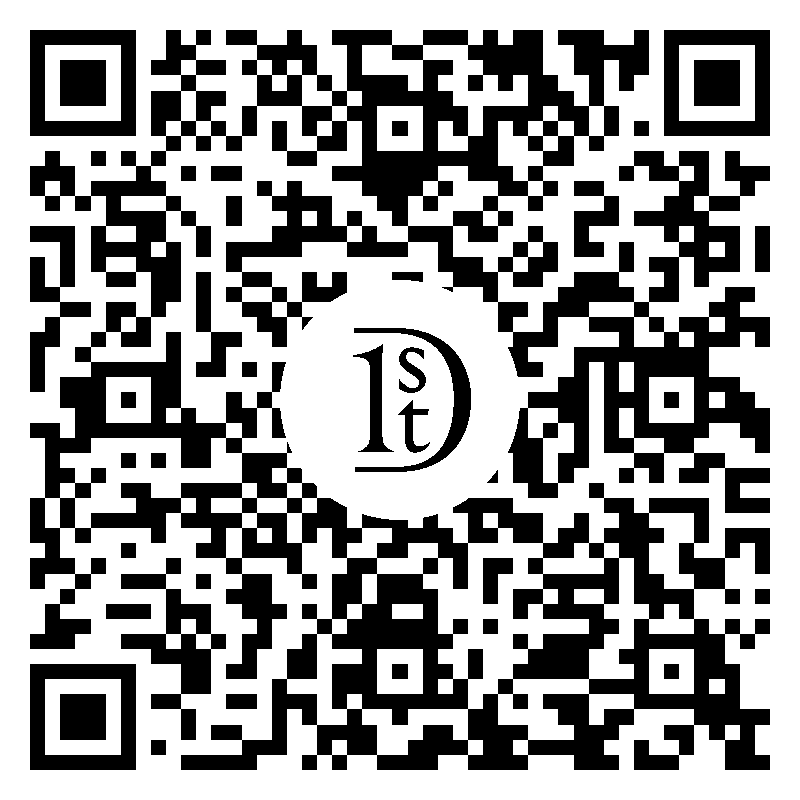 "Composition" is an abstract lithograph in purple, red, and yellow by Paul Jenkins. 10" x 7 1/2" art 20 1/2" x 18" framed Paul Jenkins was a monumental figure of American Abstract Expressionism. By pouring the paint onto his canvas, he established a new approach to get gem-like yet transparent fields of color. Jenkins was a student at the Art Students League and became involved with some of the most well-known Abstract Expressionist artists in New York at the time. Jenkins was also interested in mysticism, metaphysics, and introspection as promoted by Carl Jung. "Composition" is an exploration in complementary colors and the transparency of poured paint. The fluid forms show Jenkins's smooth technique and the variation in his liquid markmaking.

Born in Kansas City, the multimedia artist, poet and playwright Paul Jenkins began his studies at Kansas City Art Institute and the Art Students League in New York City. After his discharge from military service at the end of February 1946, he briefly studied playwriting with dramatist George McCalmon at the Carnegie Institute of Technology in Pittsburgh. Thereafter, Jenkins spent four years studying with Japanese-American artist Yasuo Kuniyoshi in New York City. His first solo exhibitions were held at Studio Paul Facchetti in Paris in 1954 and the Martha Graham Gallery in New York City in 1956. Over the past 30 years, numerous retrospectives have been curated across the globe and Jenkins’s work can be found in national collections from Europe and the United States to Israel, Australia and Japan.

The diversity of Jenkins’s work springs from a wealth of eclectic influences. Some of his earliest works included what he called "interior landscapes” influenced by ancient natural forms. Frequent student visits to the Frick Collection in New York fostered a love of the great masters, while trips to the renowned Eastern collection of the Nelson-Atkins Museum of Art in Kansas City evoked powerful responses to a monumental Chinese fresco of Buddha, polychrome sculptures of the enlightened Bodhisattva, the Buddhist goddess of mercy Kuan-Yin, Indian bronzes of Hindu god Shiva and statues of meditative Buddhist lohans. Serving in the US Naval Air Corps during the Second World War, Jenkins painted watercolours of Japanese Kabuki dancers and read the ancient Chinese poetic teachings of the I Ching and Lao Tse Tung’s Tao Te Ching, described by him as "masterpieces in simplicity.” Jenkins’s discovery of psychoanalyst Carl Jung’s book Psychology and Alchemy was as illuminating for his practice as were formative meetings with dancer Martha Graham, architect Frank Lloyd Wright and Abstract Expressionist painters Mark Rothko, Jackson Pollock and Barnett Newman.

Concerned with colour and texture, nearness and distance as well as reality and mysticism, Jenkins’s work — considered to be part of the second wave of Abstract Expressionism — is a spiritual meditation on the nature of chance, balance, synchronicity, change and transformation. His ejection from an early art class in Kansas City for eating the still life appears instructive: "For me the pear is to be eaten and experienced, not painted.” Jenkins sought to reject the traditional Neo-Platonic approach to art as well as life in favour of a Taoist concern for the “present moment.” In this sense his paintings become spiritual reflections on the transitory present, life merely a rippled dance upon the water’s surface. Jenkins’s death in 2012 and the subsequent release of important works onto the market by his estate increased global interest in his work and they have grown in value and popularity. Jenkins’s works can be found in public and private collections worldwide. 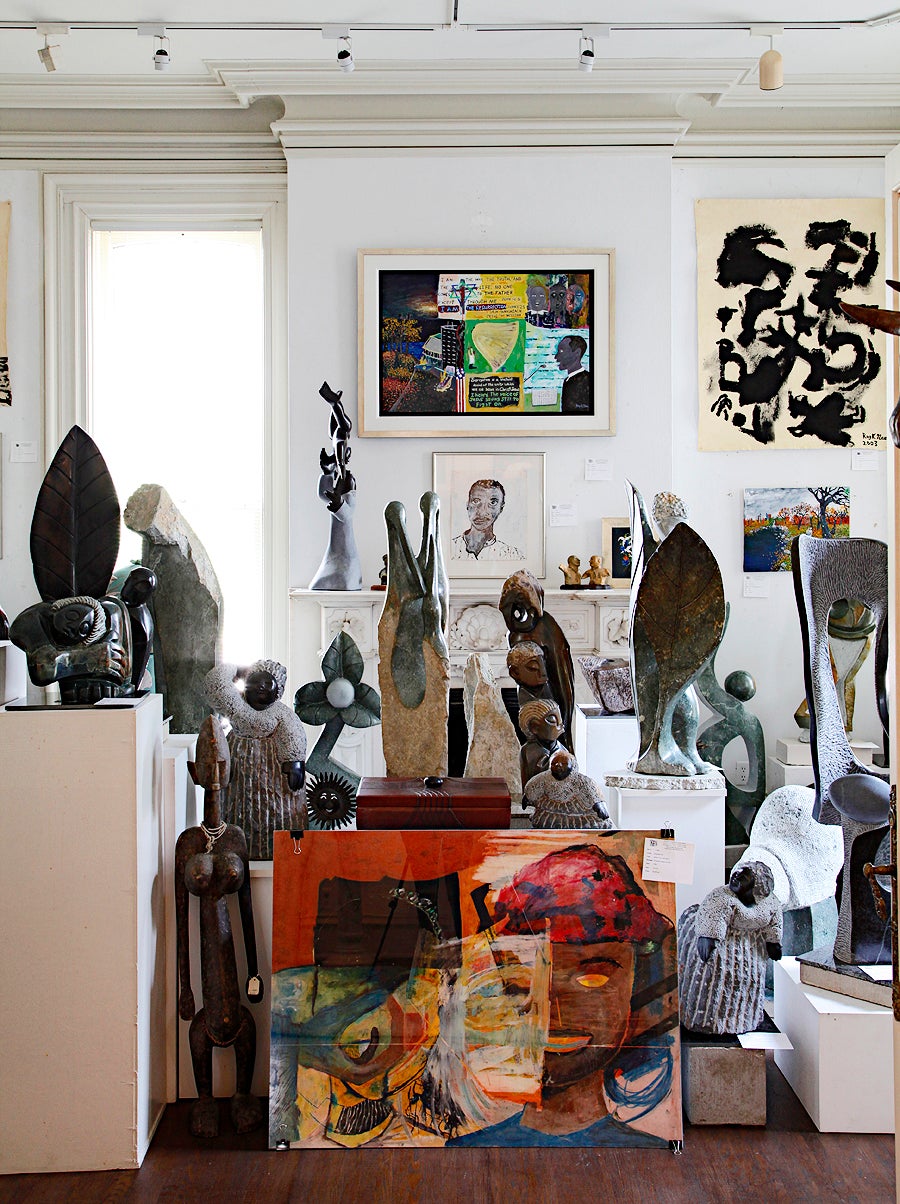 About the Seller
5 / 5
Located in Milwaukee, WI
Platinum Seller
This distinction is for experienced sellers who continually surpass customer expectations.
Established in 1966
1stDibs seller since 2017
141 sales on 1stDibs
Typical response time: 1 hour
More From This Seller
View All From Seller