Items Similar to Angriff -- Screen Print, Stripes, Black and White, Contemporary, by Frank Stella
Frank Stella - Then Came a Stick and Beat the Dog, Illustrations After El Lissitzky's Had Gadya 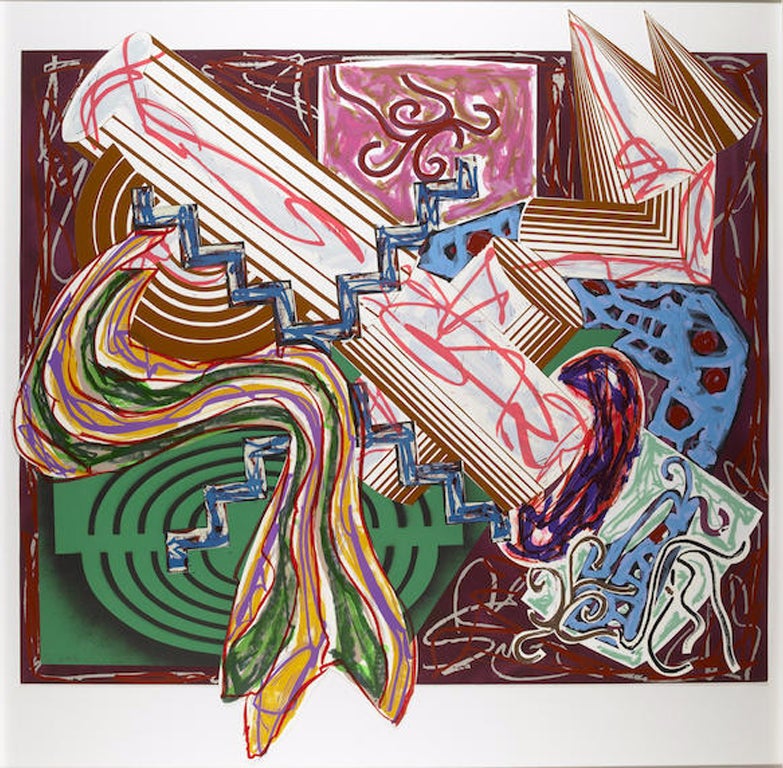 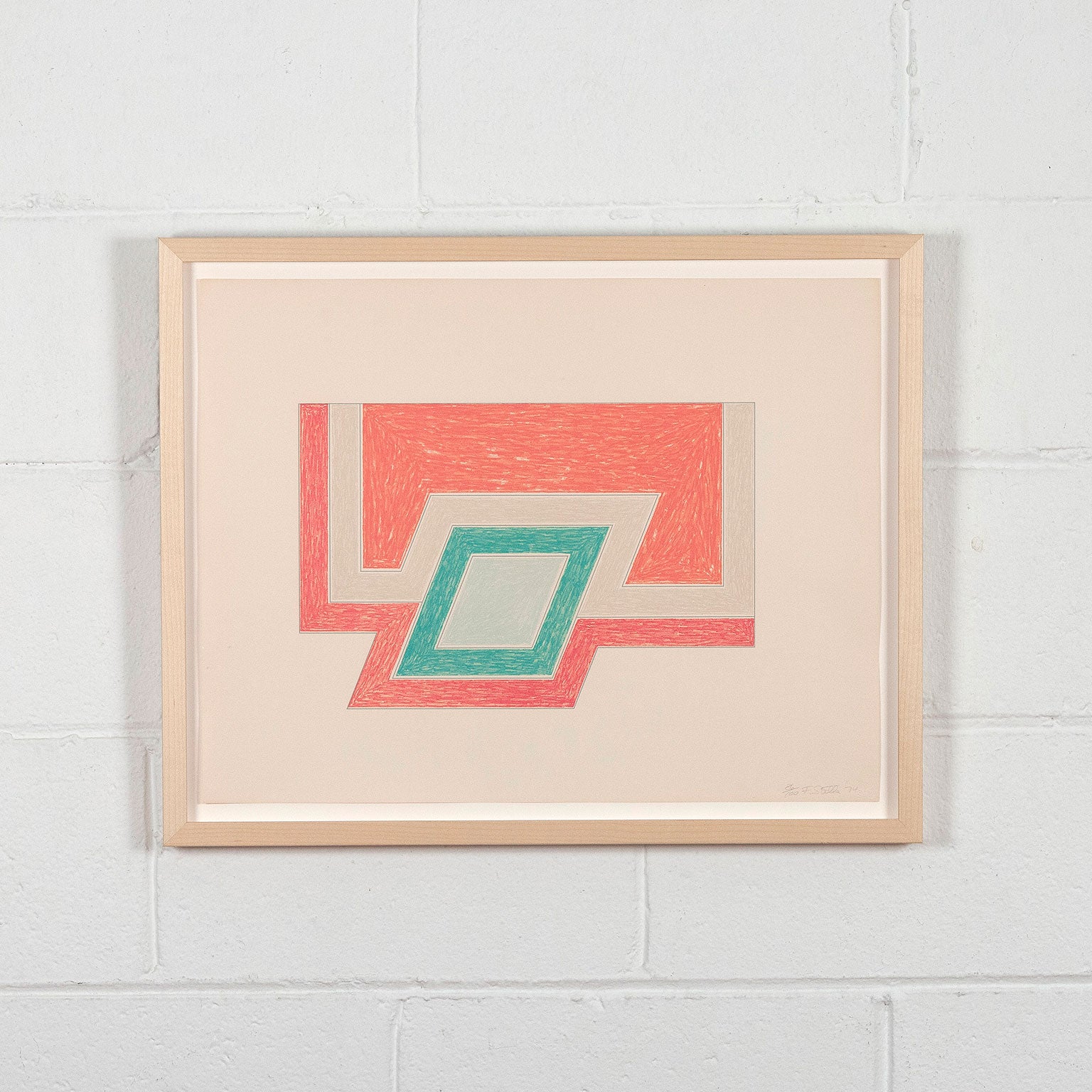 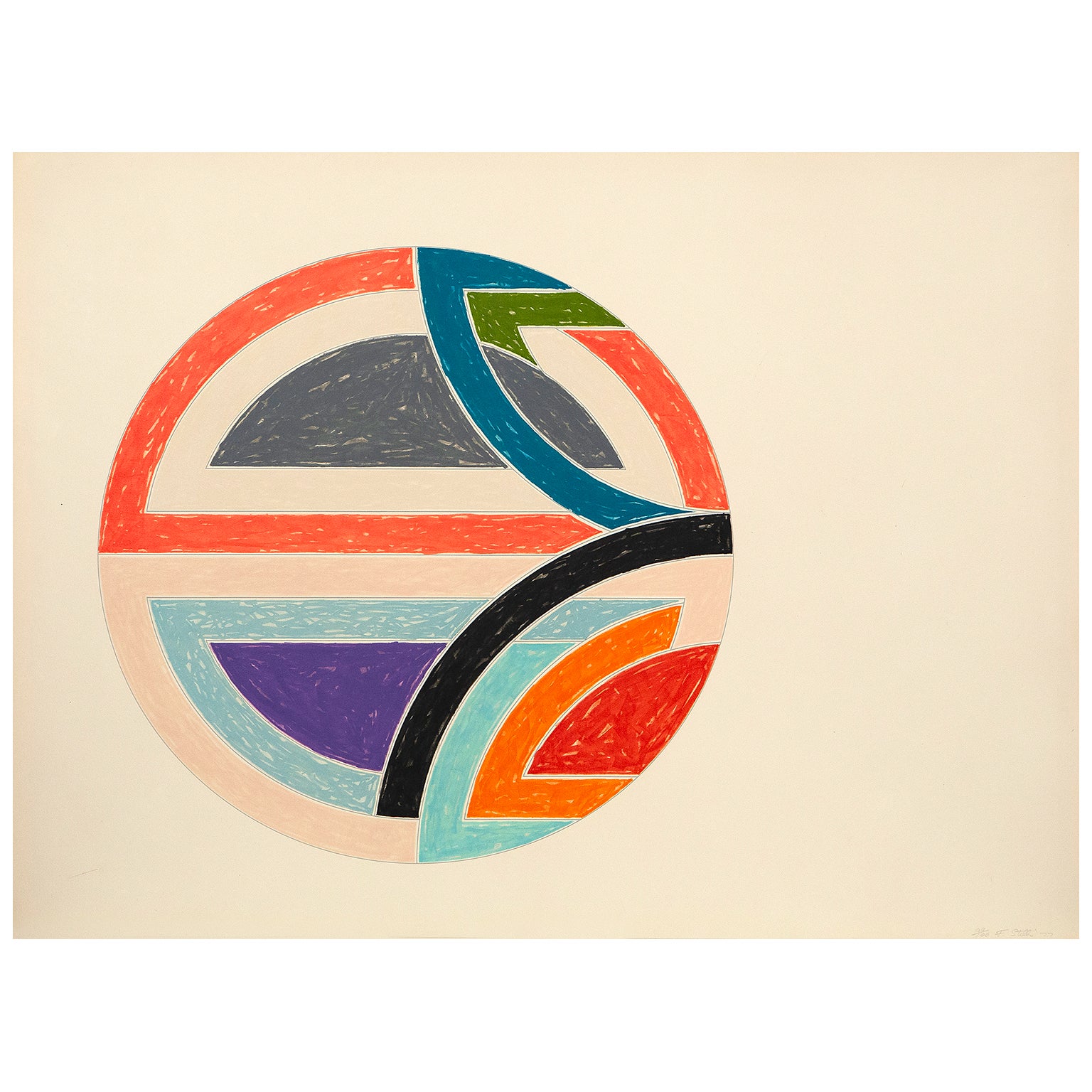 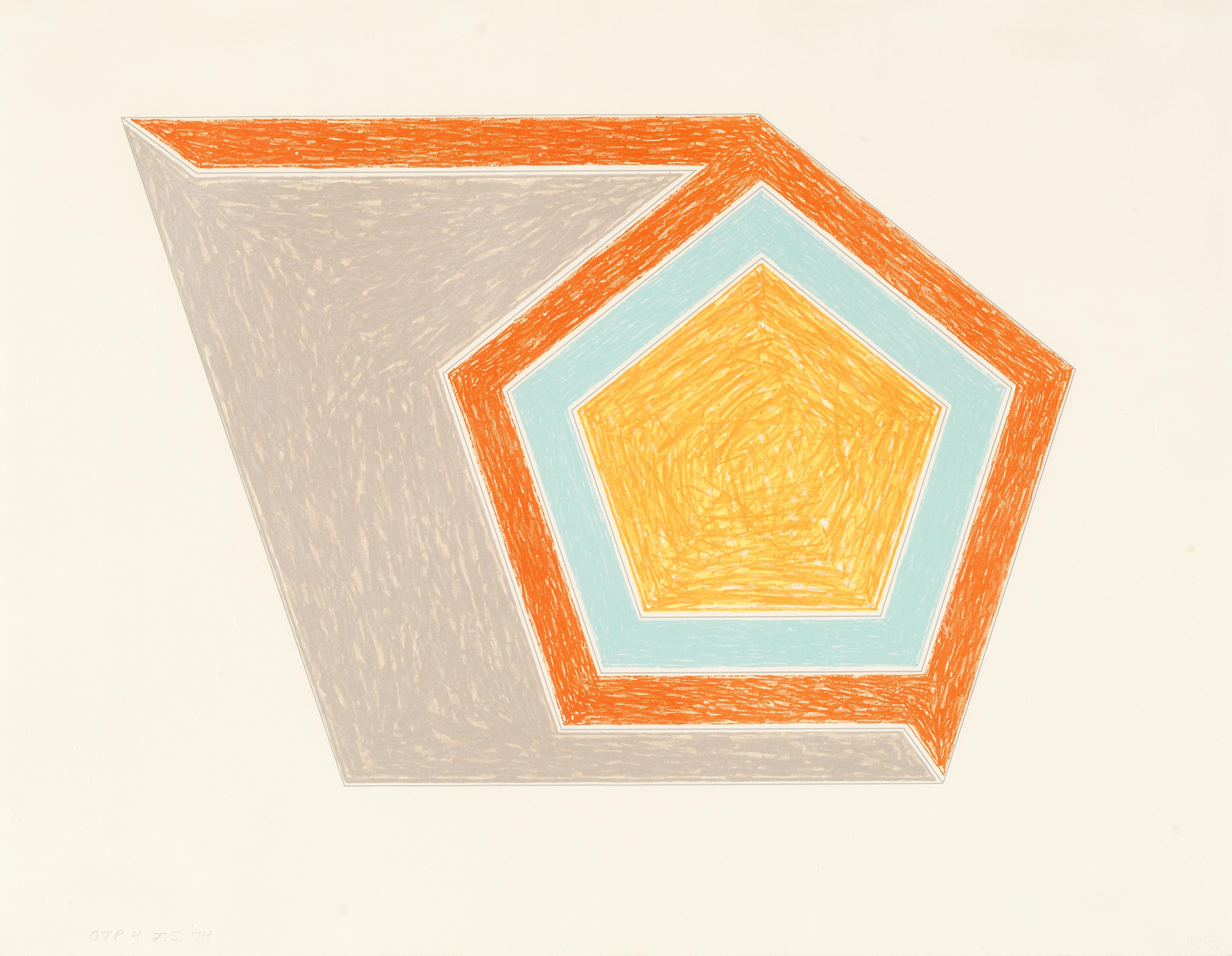 Frank Stella - Then Came an Ox and Drank the Water 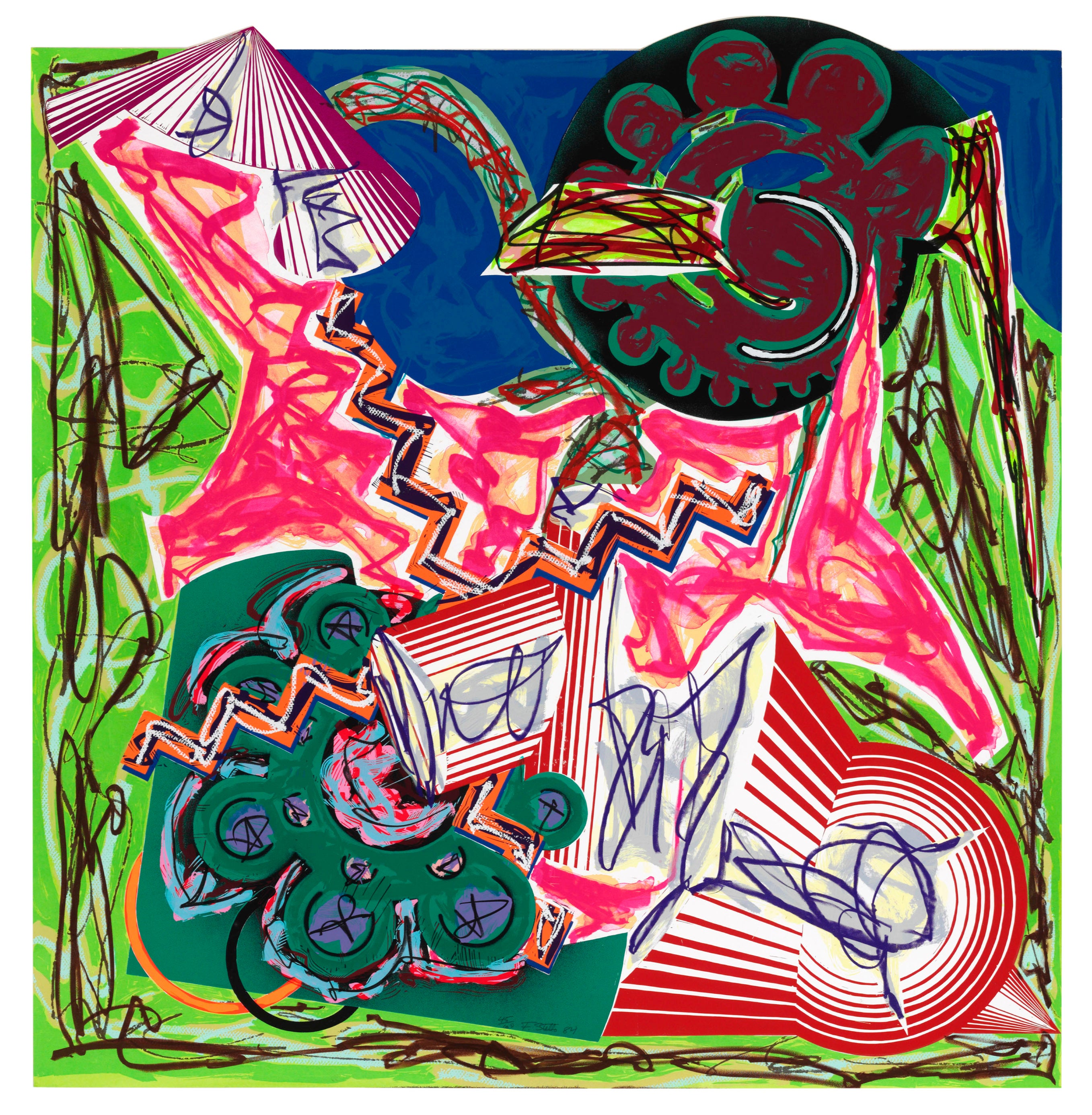 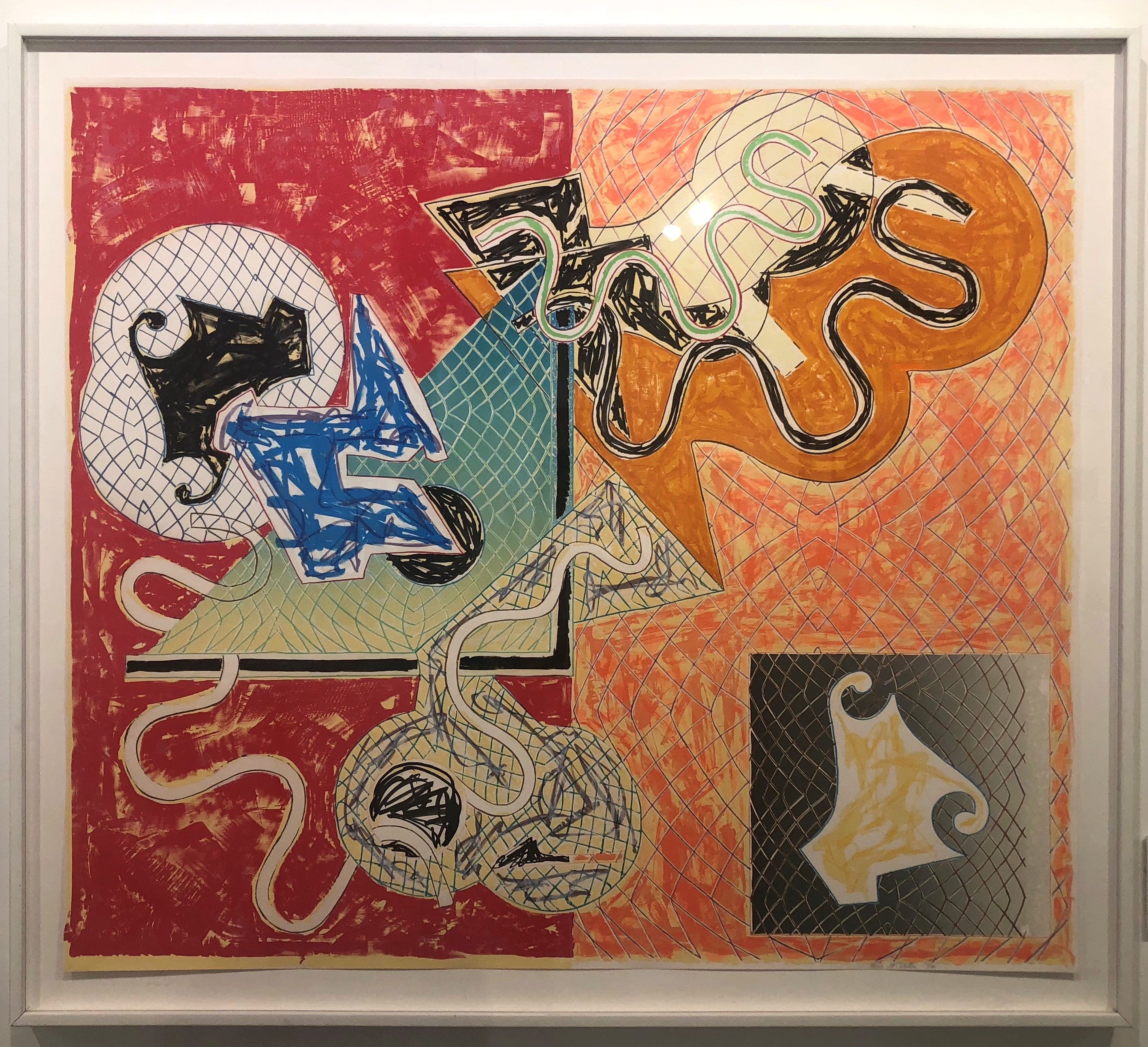 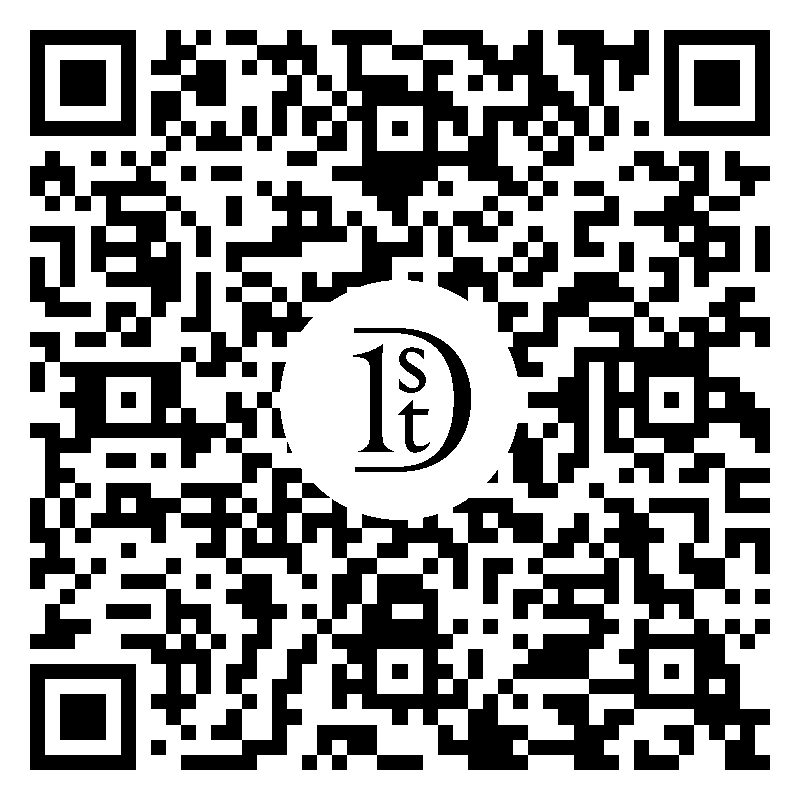 Frank Stella is one of the central figures in postwar American art. A proponent of minimalism and non-representational abstraction, Stella is apainter, printmaker and sculptor. A native of Massachusetts, he attended Phillips Academy in Andover and earned a BA from Princeton, where he studied art and color theory with Josef Albers and Hans Hofmann. Stella frequented New York galleries as a student and was intrigued by the work of Jackson Pollock and Franz Kline, both of whom were at the height of their creative powers in the late 1950s. After moving to New York in 1958, he gravitated toward the geometric abstraction and restrained painting style of Barnett Newman and Jasper Johns. Johns’s flat, graphic images of common objects such as targets and flags prompt viewers to question the essential nature of representation and whether these pictures are really paintings or simply new iterations of the items themselves. Stella pushed Johns’s reasoning further, considering paintings on canvas as objects in their own right, like sculptures, rather than representations. This led him to reject certain formal conventions, eschewing sketches and often using nontraditional materials, like house paint.


In 1959, Stella created his “Black Paintings,” series, in which bands of black paint are separated by thin, precise stripes of bare canvas. At a time when contemporary painting was all about wild gestures, thick paint and formal abandon, these pieces created a sensation. That same year, Stella's work was included in the exhibition "Sixteen Americans" at the Museum of Modern Art in New York, and he joined the roster of artists represented by Leo Castelli Gallery. In 1960, he began introducing color into his work and using unconventionally shaped canvases to complement his compositions. In his “Eccentric Polygon” series, from 1965 and ‘66, he embraces asymmetry and bold color, creating forms delineated by painted fields and by the edges of the canvas. This series was followed by the 1967–70 “Protractor” series, characterized by colorful circles and arcs. Named after the ancient cities whose circular plans Stella had noticed while traveling in the Middle East during the 1960s, s these works usually comprised several canvases set flush against one another so that the geometric figures in each section came together in a larger, more complex whole. Also in the mid-1960s, Stella started exploring printmaking, initially working with Kenneth Tyler, of Gemini G.E.L., and later installing printing equipment in his own studio. In 1968, he created the “V” series of lithographs,which included the print Quathlamba I. Following a solo exhibition at the Museum of Modern Art in 1970, Stella began working in three dimensions, adding relief elements to paintings, which could almost be considered wall-mounted sculptures. Stella’s 1970-–73 “Polish Village” series was inspired by a documentary photos and architectural drawings of Polish synagogues that had been destroyed by Nazis during World War II. The resulting works — composed primarily of paint and cloth on plywood — are more rugged and less polished than his previous series. Moby-Dick was his muse for a series of three dimensional works he created in the 1980s in which waveforms, architectural elements and Platonic solids play a prominent role. During this period, Stella embraced a new, exuberant style that is exemplified in La Scienza della Fiacca. In 1997, he oversaw the creation of the Stella Project, a 5,000-square-foot work inside the Moores Opera House at the University of Houston. A large free-standing sculpture by Stella stands outside the National Gallery of Art in Washington, D.C.


Stella’s work is in the collections of numerous important museum collections around the world, including New York’s Museum of Modern Art and Metropolitan Museum of Art; the Menil Collection, in Houston; the Hirshhorn Museum and Sculpture Garden, in Washington, D.C.; and the San Francisco Museum of Modern Art. He was awarded the National Medal of Arts by President Obama in 2009, and was given the Lifetime Achievement Award in Contemporary Sculpture by the International Sculpture Center in 2011. 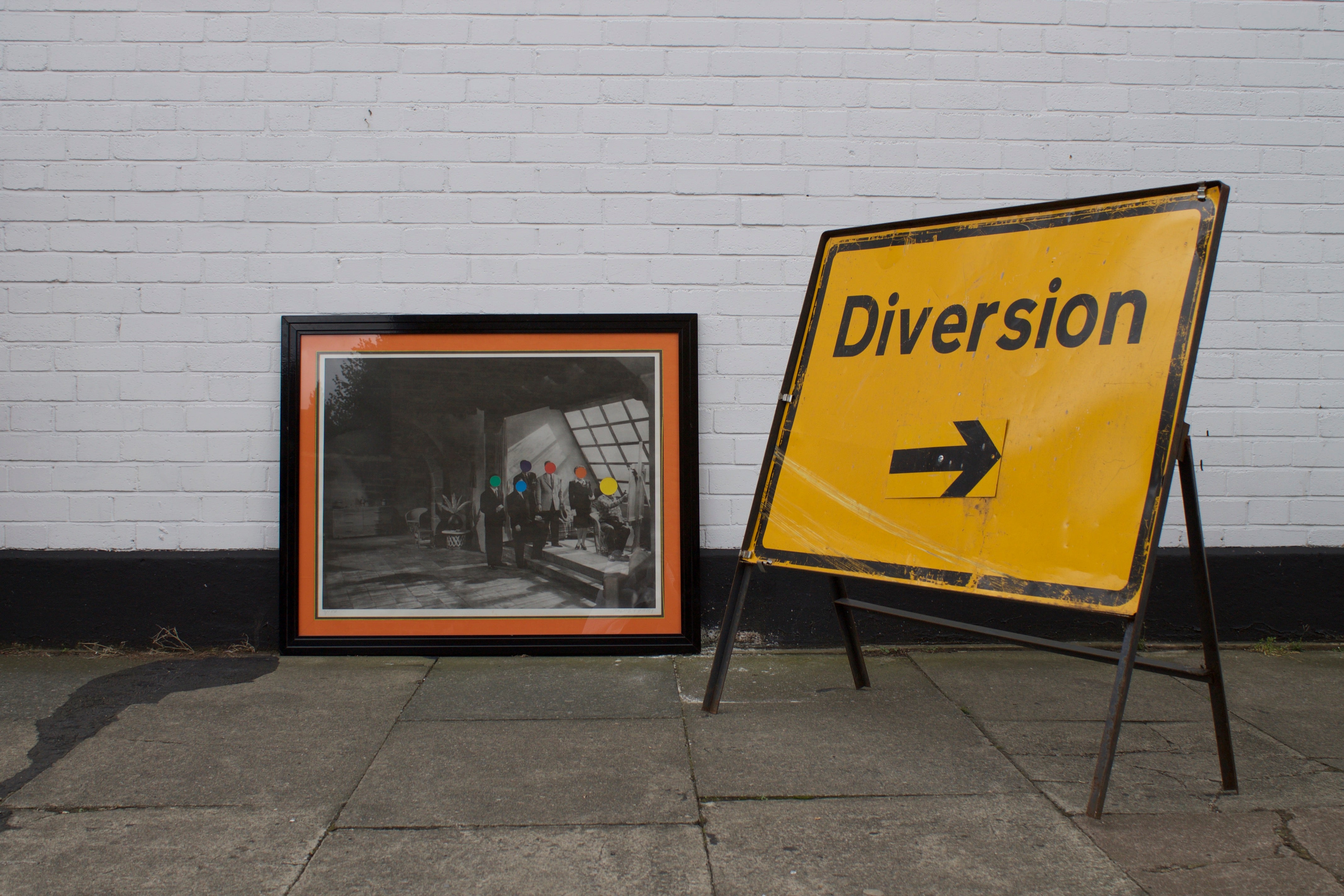 About the Seller
5 / 5
Located in London, United Kingdom
Platinum Seller
These expertly vetted sellers are 1stDibs' most experienced sellers and are rated highest by our customers.
Established in 2017
1stDibs seller since 2017
63 sales on 1stDibs
Typical response time: 3 hours
More From This Seller
View All From Seller

Then Came a Stick and Beat the Dog, Illustrations After El Lissitzky's Had Gadya
By Frank Stella
Located in Rancho Santa Fe, CA
Lithograph, linocut, and screenprint in colors with hand-coloring and collage, on wove paper, 1984, signed and dated in pencil, from the numbered edition of 60 (there were also 10 ar...
Category

Frank Stella
Then Came a Stick and Beat the Dog, Illustrations After El Lissitzky's Had Gadya, 1984

$24,000
Conway
By Frank Stella
Located in Toronto, Ontario
This is another fine example from Frank Stella's highly desirable "Eccentric Polygons" series. These works are noted for their dynamic forms where flat shapes were being pushed or c...
Category

Price Upon Request
Then Came an Ox and Drank the Water
By Frank Stella
Located in New York, NY
Lithograph, linocut, and screenprint in colors with hand-coloring on T.H. Saunders paper background and collage on Somerset paper Edition of 60 From "Illustrations After El Lissitzky...
Category

Frank Stella
Then Came an Ox and Drank the Water, 1984

$11,475
Frank Stella, Black Series I, Suite of 4 lithographs, 1967
By Frank Stella
Located in Houston, TX
These four wonderful lithographs by Frank Stella are from a portfolio of nine prints published in 1967 by Gemini G.E.L. in Los Angeles. The Museum of Modern Art in New York owns a co...
Category