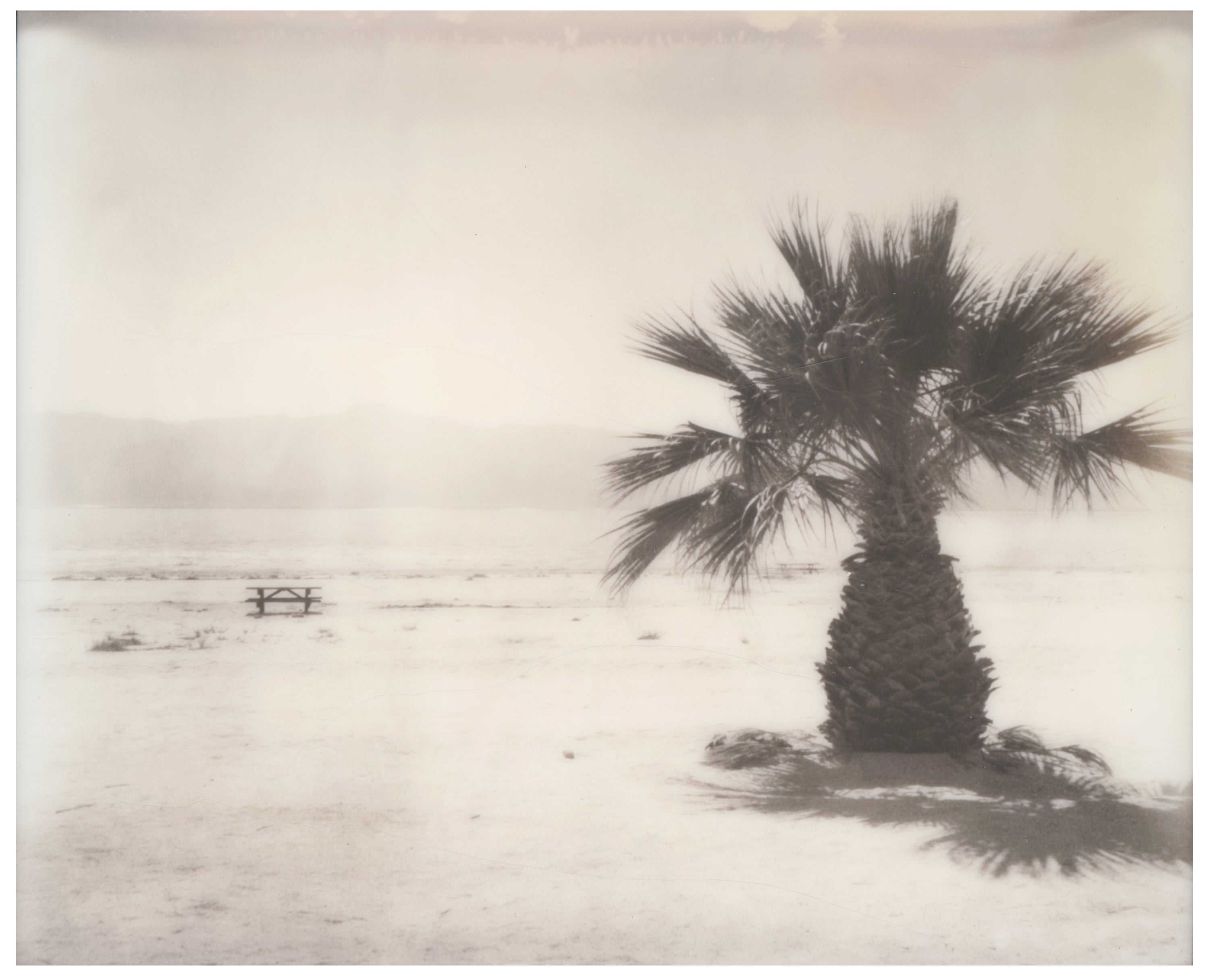 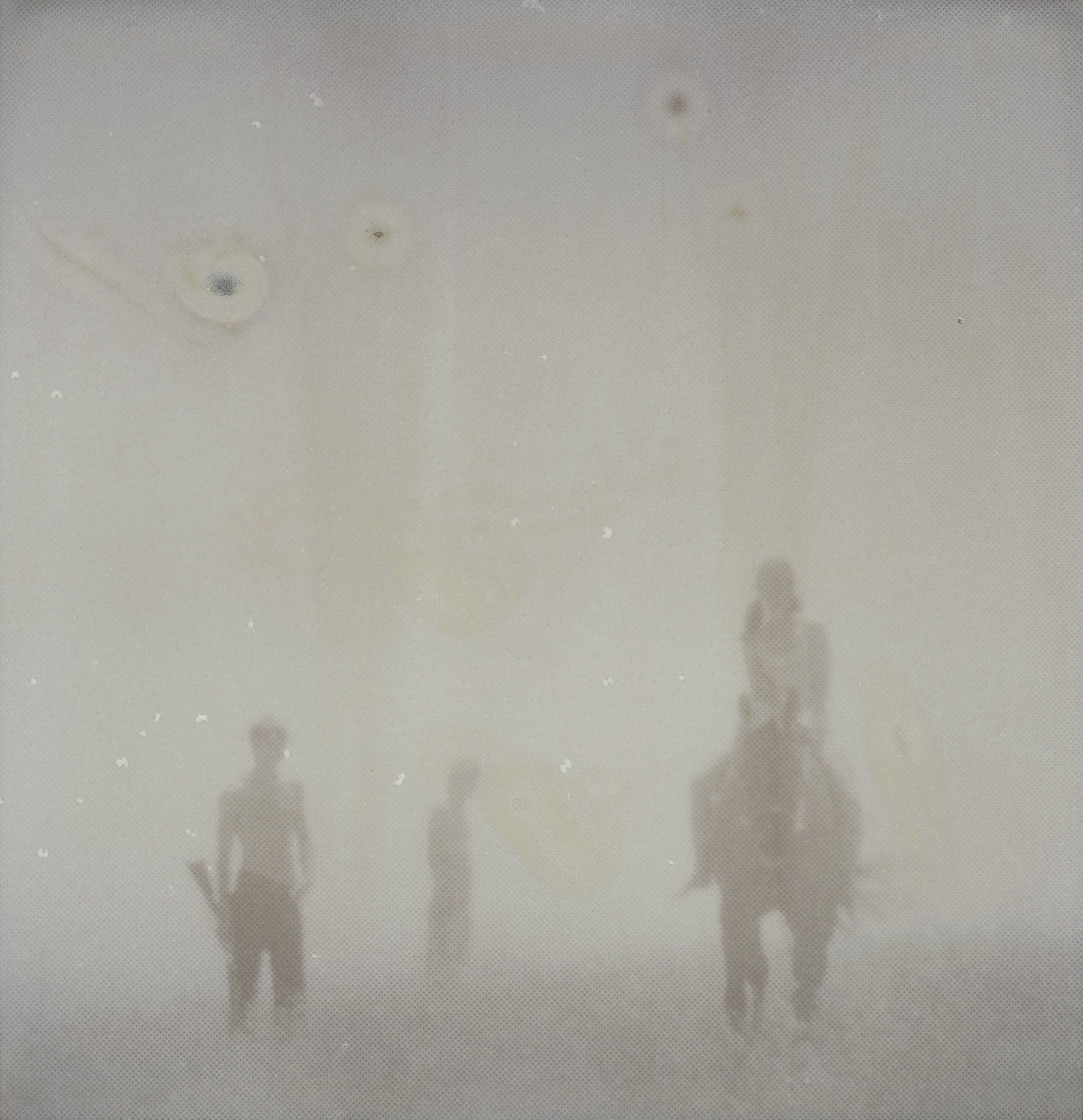 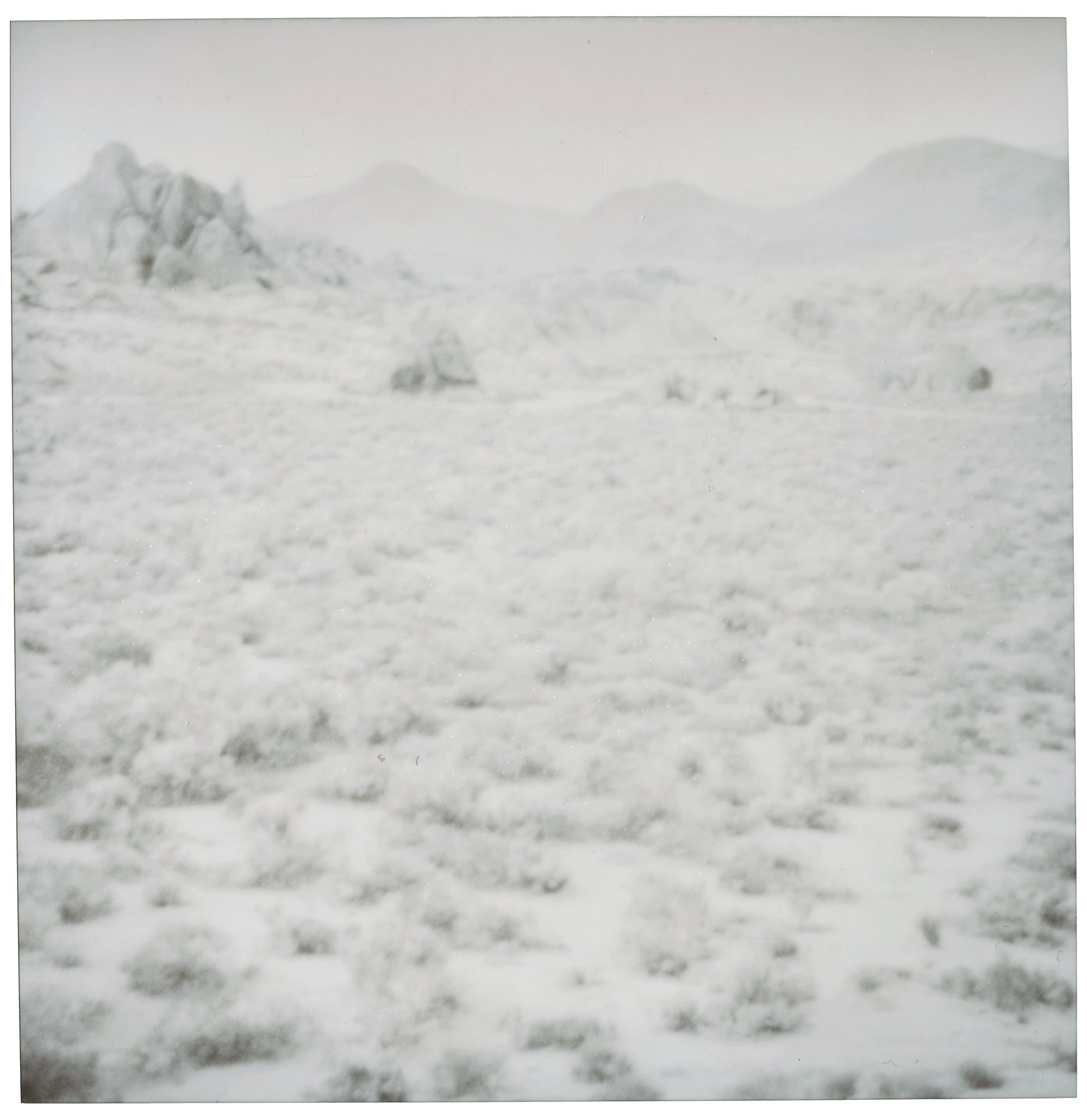 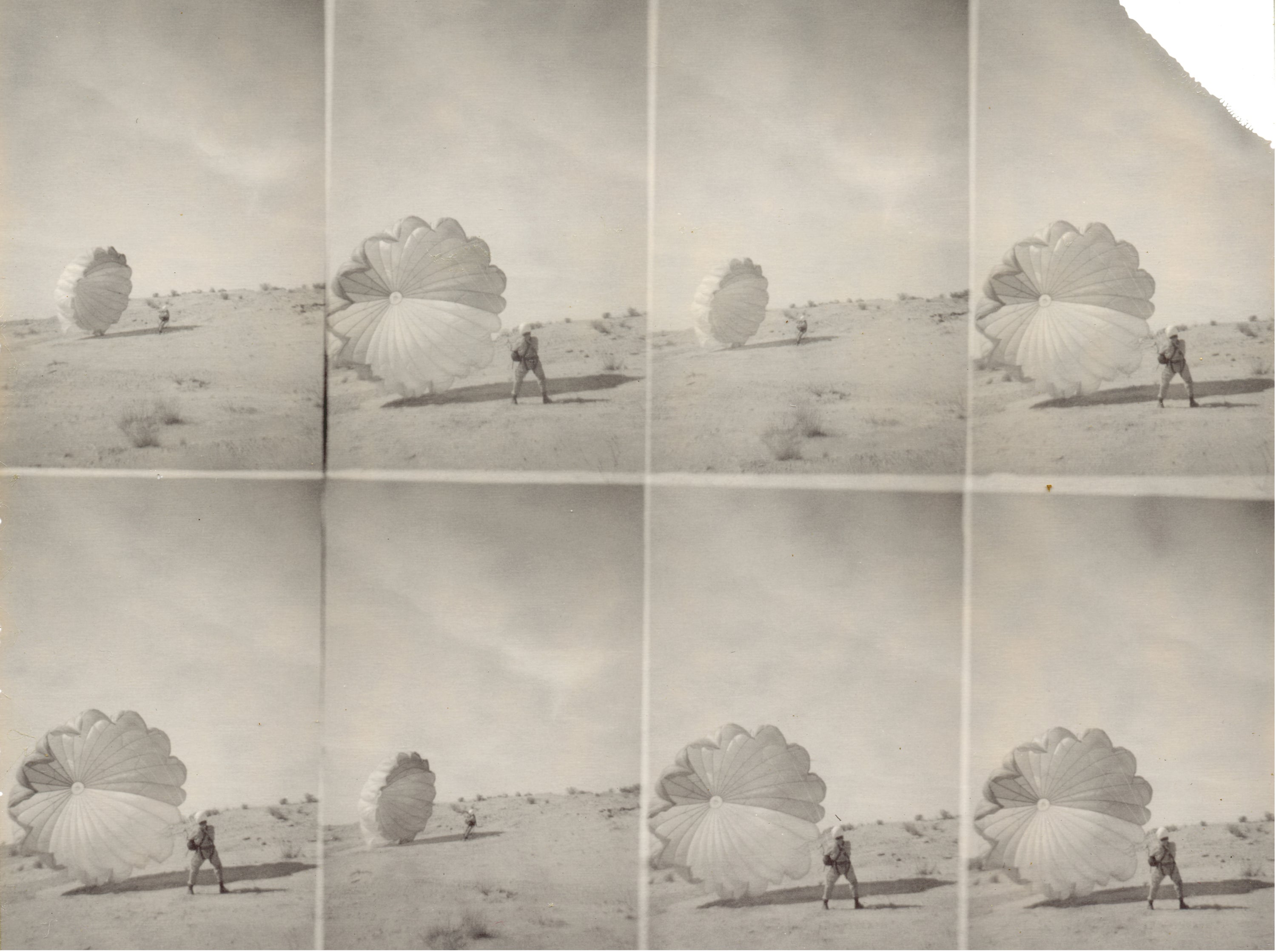 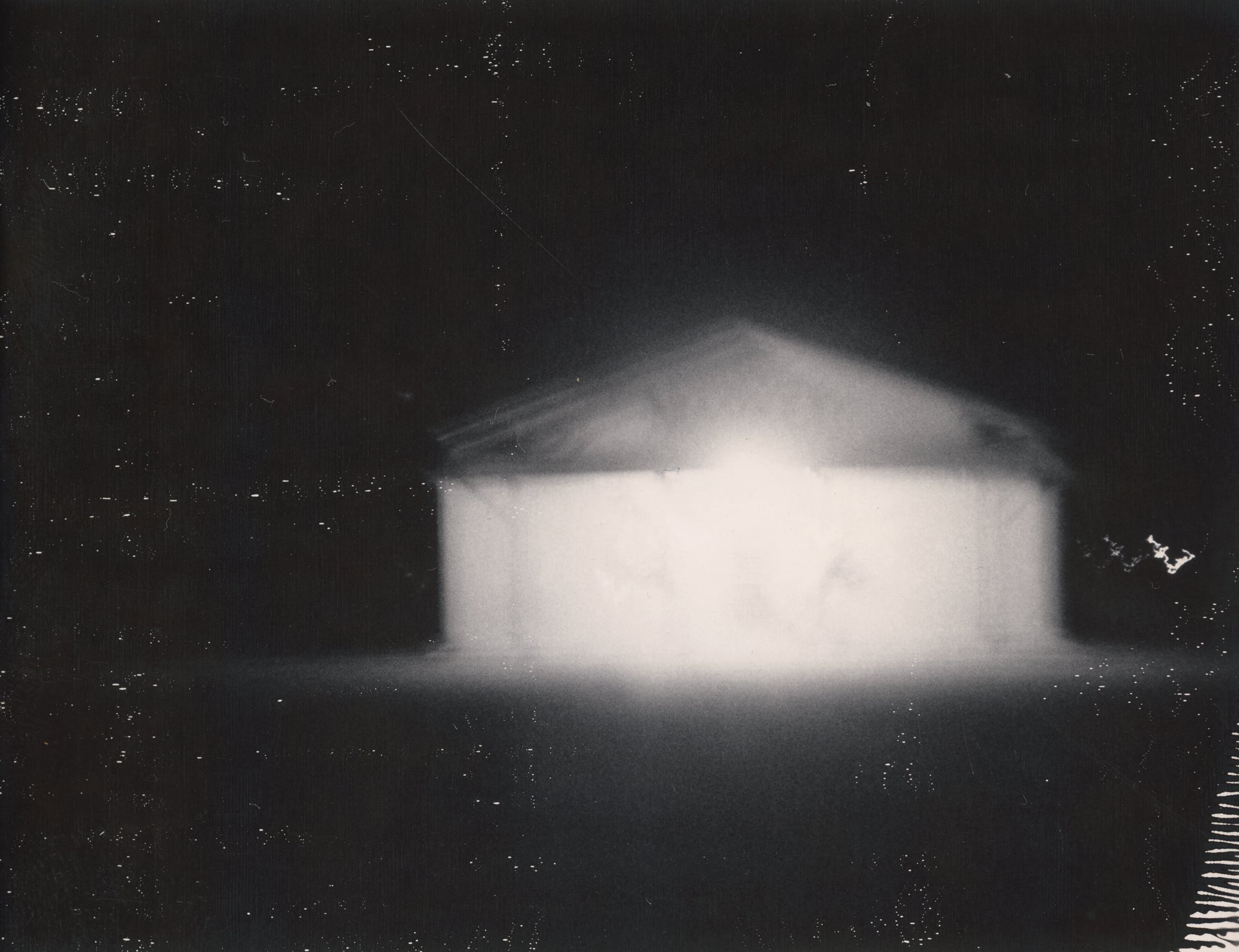 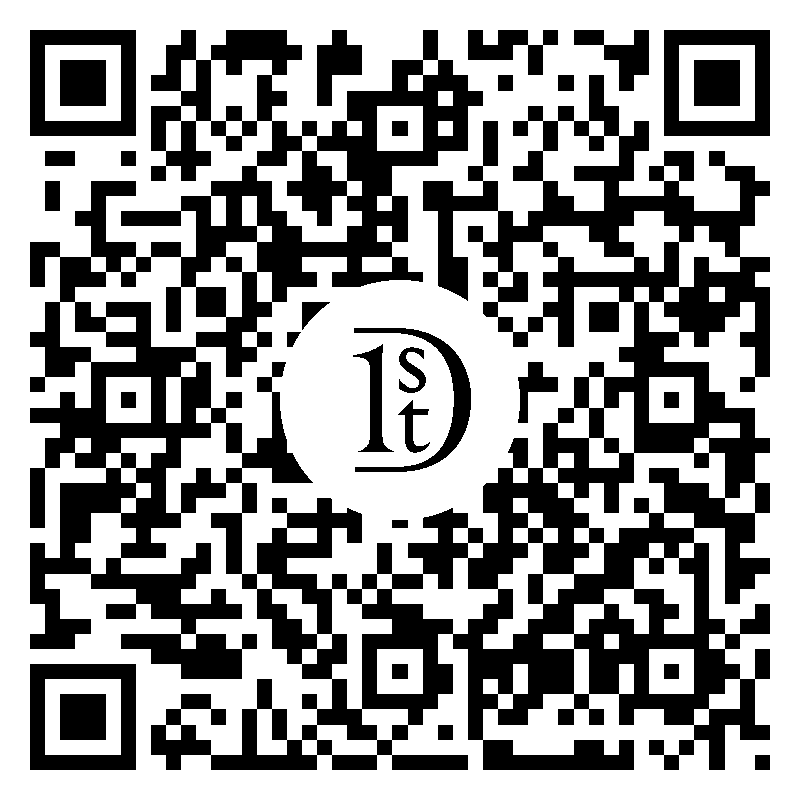 Salton Sea Palm Tree (California Badlands) 2016, 20x24cm, Edition 3/10. Digital C-Print, based on a Polaroid. Certificate and Signature label. Artist Inventory No. 18088. not mounted. Stefanie Schneider's Artist statement: Desolation and solitude are two adjectives that I would use to describe my Polaroid photographs, another would be the Japanese term 'Wabi-Sabi. The simplicity of 'flawed beauty' comes from the expired film I use to create a reflection of love and loneliness.  My dream of accepting so called 'imperfection' is in fact a a realizing of a different world view for which there's no way back. The shiny, perfect point of view is crumbling and has been for a long time. Formally, my work was called blurry, broken or even botched but they fail in the test of acceptance that all things are imperfect. It's a seismic shift for some but in this age where the cracks are no longer hidden, the affirmation of reality is still difficult.  But that's so depressing right? To acknowledge that the dream is actually turning into a nightmare. It's easier to deny than to utter the truth of defeat. (ruin).  That we are all finite is irrefutable but we just don't want to believe it. That's how organized religion managed to take the hold of the masses but that too is waning these days. Proving that everything has it's time, even God.  I began expressing myself through photography before the digital age we currently inhabit and certainly predating 'instagram'. Understanding the skill of analog film which requires that conditions be right before the click of the shutter is in stark contrast to todays, post production photography.  The celebration of imperfection reconnects us to the real world where we normally mask our flaws. I chose Polaroid film because it portrays color like candy making even the broken an expression of endearment. The combination of the color and the blemishes of expired Polaroid analog film gave me a sense of inner peace with my surroundings. It just fit. Nothing had portrayed my vision so symbolically. Frankly, It's liberating. The quirks, oddities or the perfectly imperfect uniqueness of my work relate to our own life blemishes and somehow make them ok or even remarkable. Honoring that value of imperfection makes it permissible to be.  One might put the world into two camps, the ones who appreciate the beauty of imperfection and the ones who don't. Let me warn you now, those who attempt to see and are successful, can never return. To see that perspective is to have gone into a twilight zone of understanding where your former self is altered forever and the once revered is no longer possibly seen with beauty.   Allowing space and time for the magic moment to manifest and capturing that enchantment.  I use my senses and current affairs to plot that path of serendipity especially when it's a mark of turbulence. The upheaval of balance is the key for chance and allows all unknown forces to contribute to the moment. This is what it means to me. The first rule in art is that there are no rules.  I look inside myself, ground that emotion and imagine it in a dream.  It's the only thing that make any sense to me.  Dreams are the foundation of emotion and the link to our sub-conscience. The link between my work and your sub-conscience is that you're allowed to insert yourself into the story itself.  I try to clarify my nightly dreams subjectively with a cup of nostalgia in a bowl of emotions and sprinkle it generously with sex. It is there, the fountain of our instincts.

About the Seller
5 / 5
Located in Morongo Valley, CA
Platinum Seller
These expertly vetted sellers are 1stDibs' most experienced sellers and are rated highest by our customers.
Established in 1996
1stDibs seller since 2017
314 sales on 1stDibs
Typical response time: <1 hour
More From This Seller
View All From Seller

Price Upon Request
Stallion
By Caroline Christie
Located in Greenwich, CT
Wild Horse Photography Dust fills the air. Gracefully, tentatively, these powerful animals dance around one another on vast prairies bathed in the golden light of day. Watching thes...
Category

Price Upon Request
Beauty 2
By Caroline Christie
Located in Greenwich, CT
Wild Horse Photography Dust fills the air. Gracefully, tentatively, these powerful animals dance around one another on vast prairies bathed in the golden light of day. Watching thes...
Category

Price Upon Request
Sweet Smell of Sage
By Caroline Christie
Located in Greenwich, CT
Dust fills the air. Gracefully, tentatively, these powerful animals dance around one another on vast prairies bathed in the golden light of day. Watching these gentle giants, they se...
Category

Price Upon Request
Sweet Smell of Sage
By Caroline Christie
Located in Greenwich, CT
Wild Horse Photography Dust fills the air. Gracefully, tentatively, these powerful animals dance around one another on vast prairies bathed in the golden light of day. Watching thes...
Category