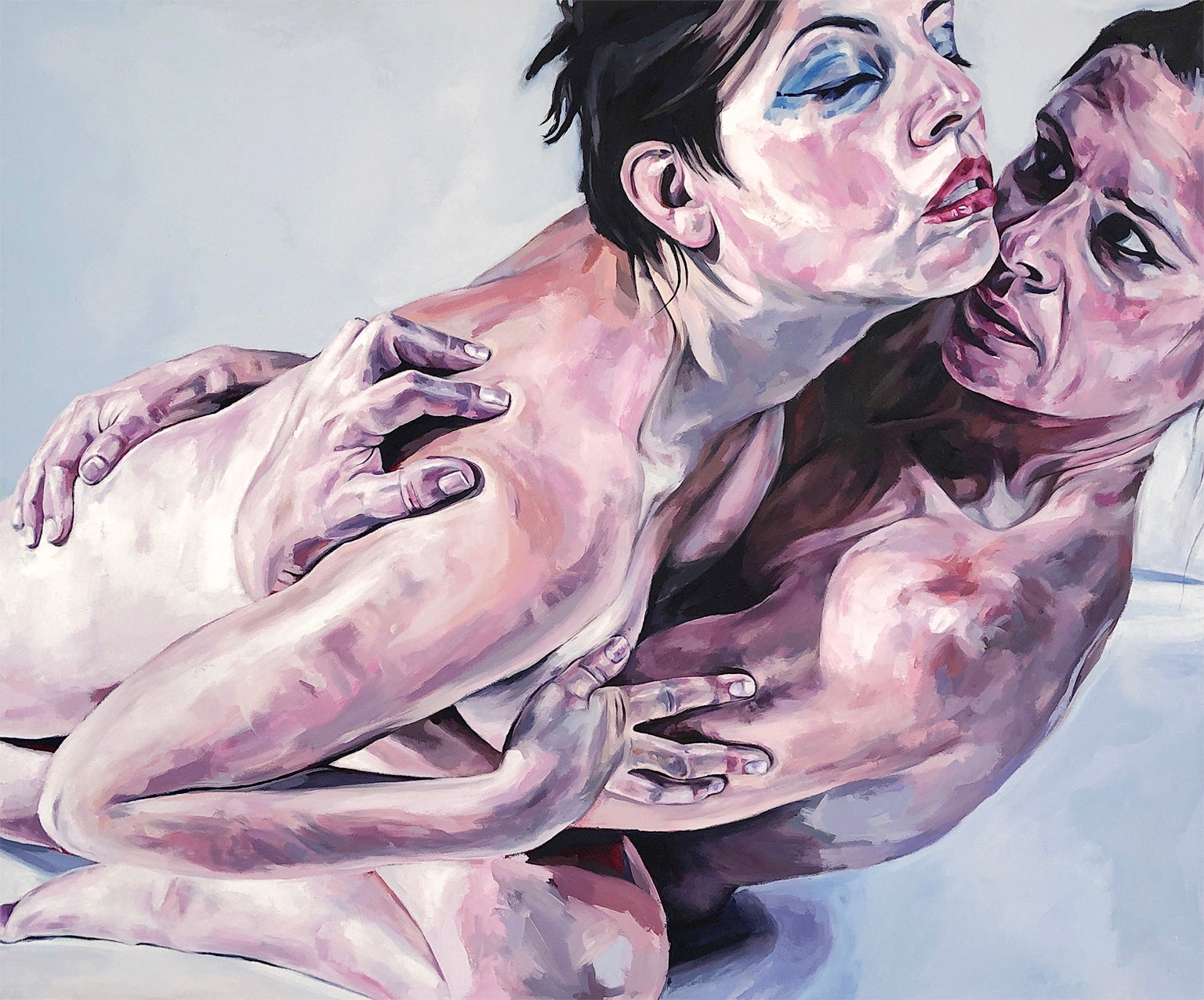 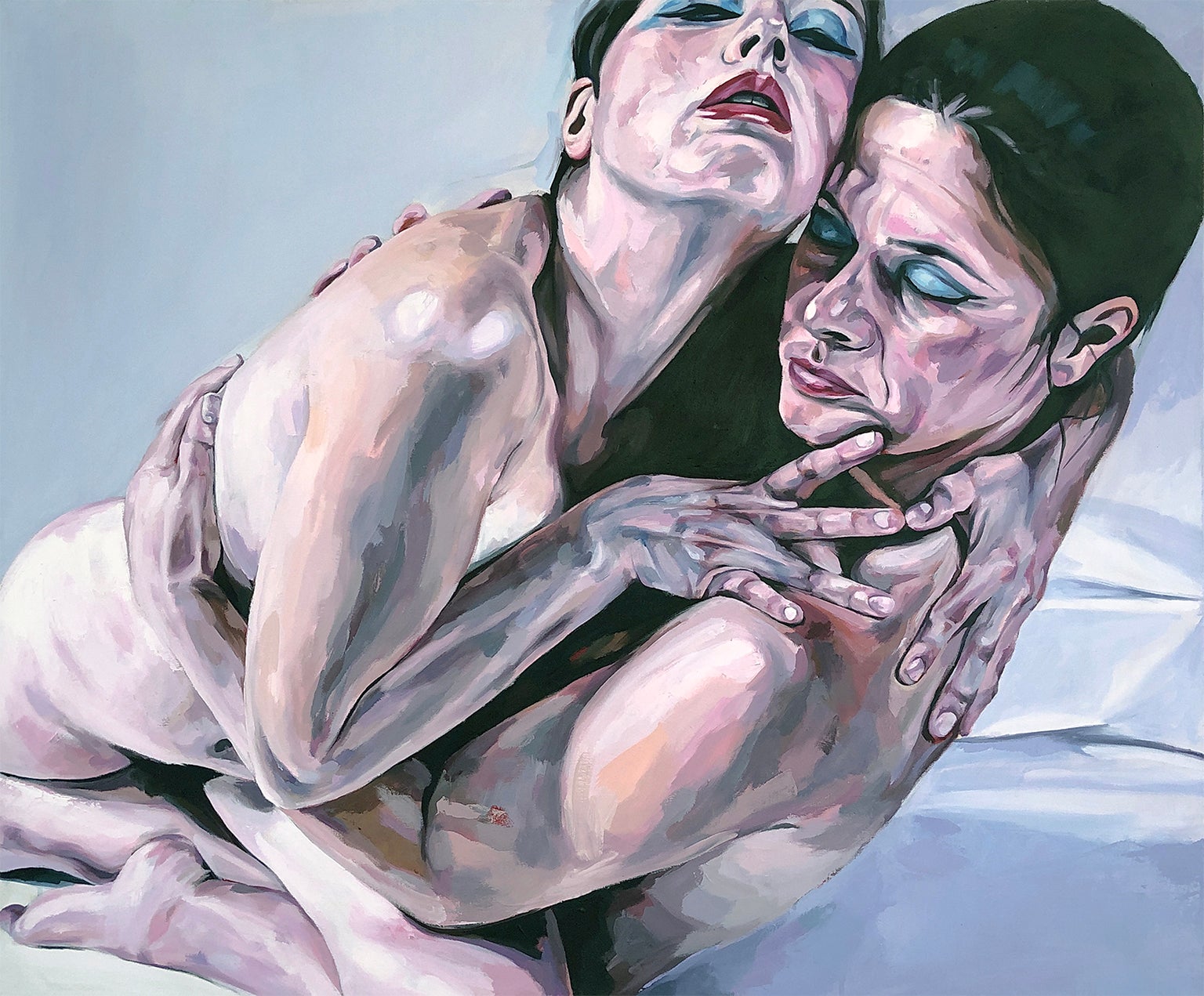 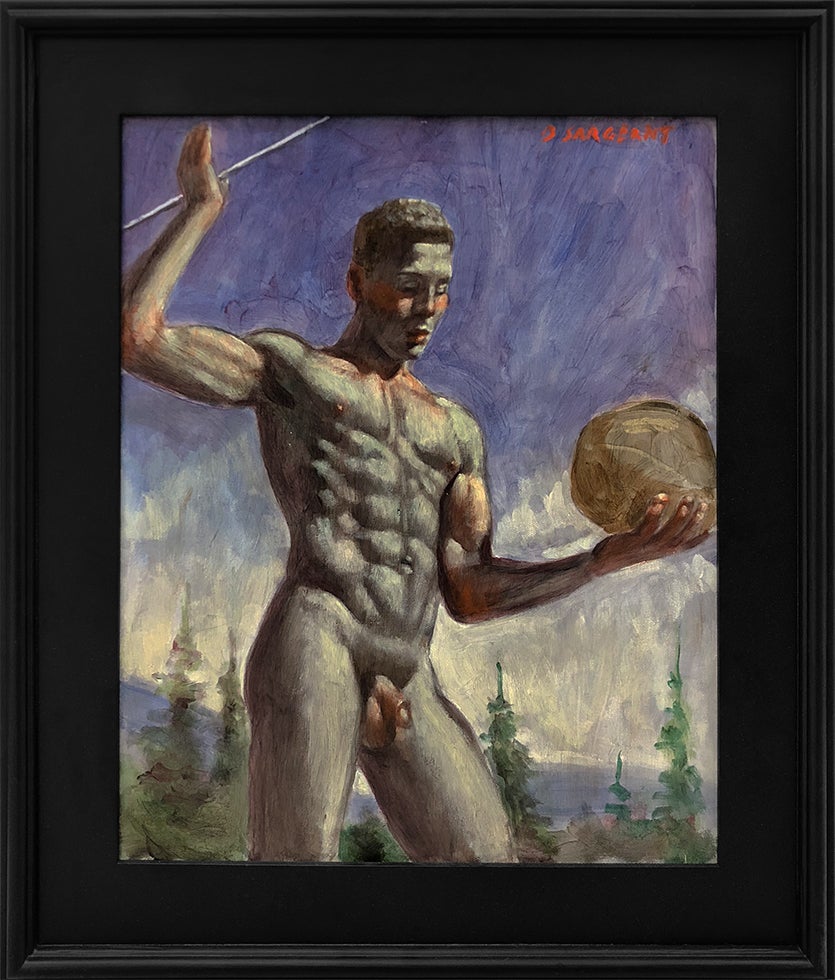 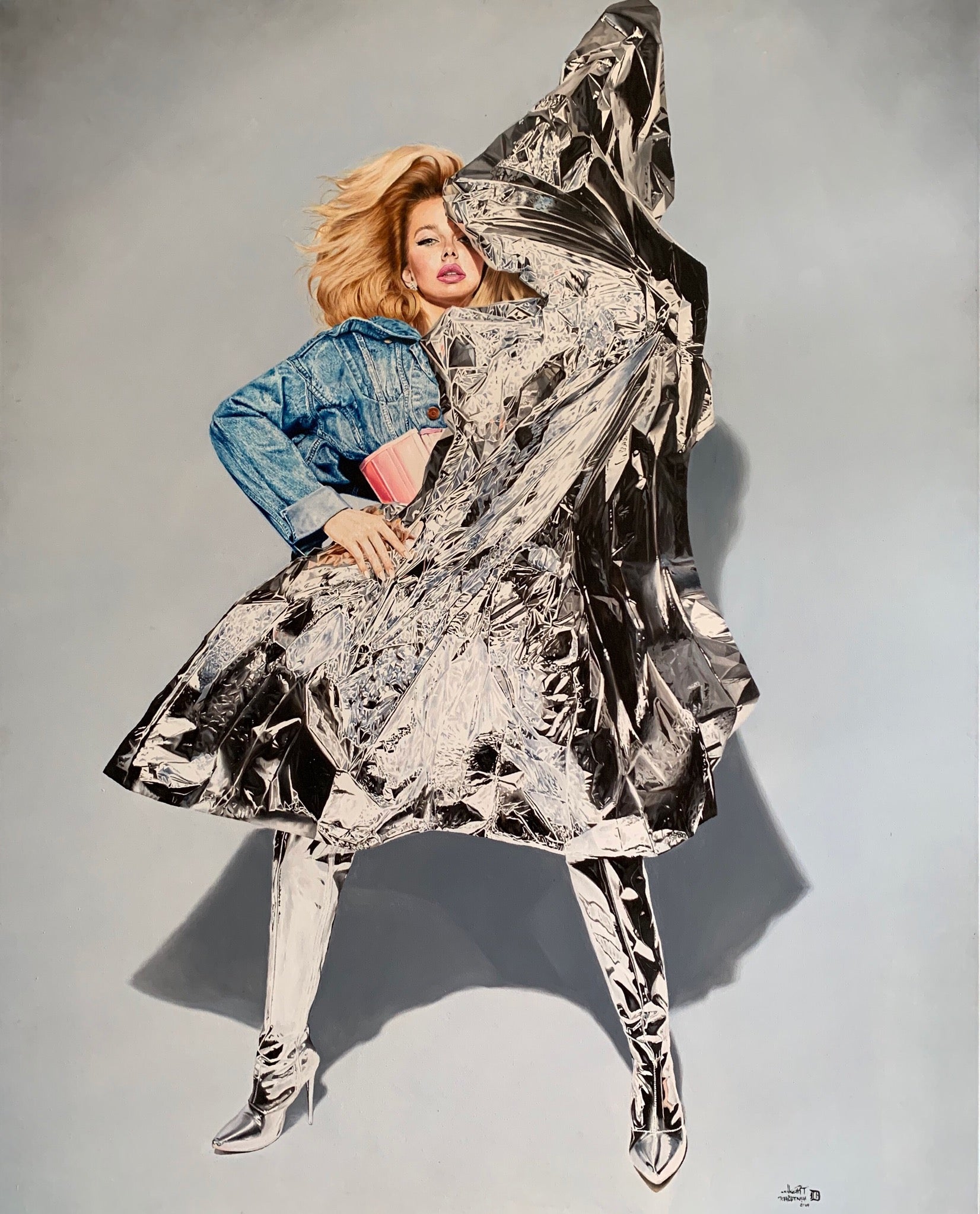 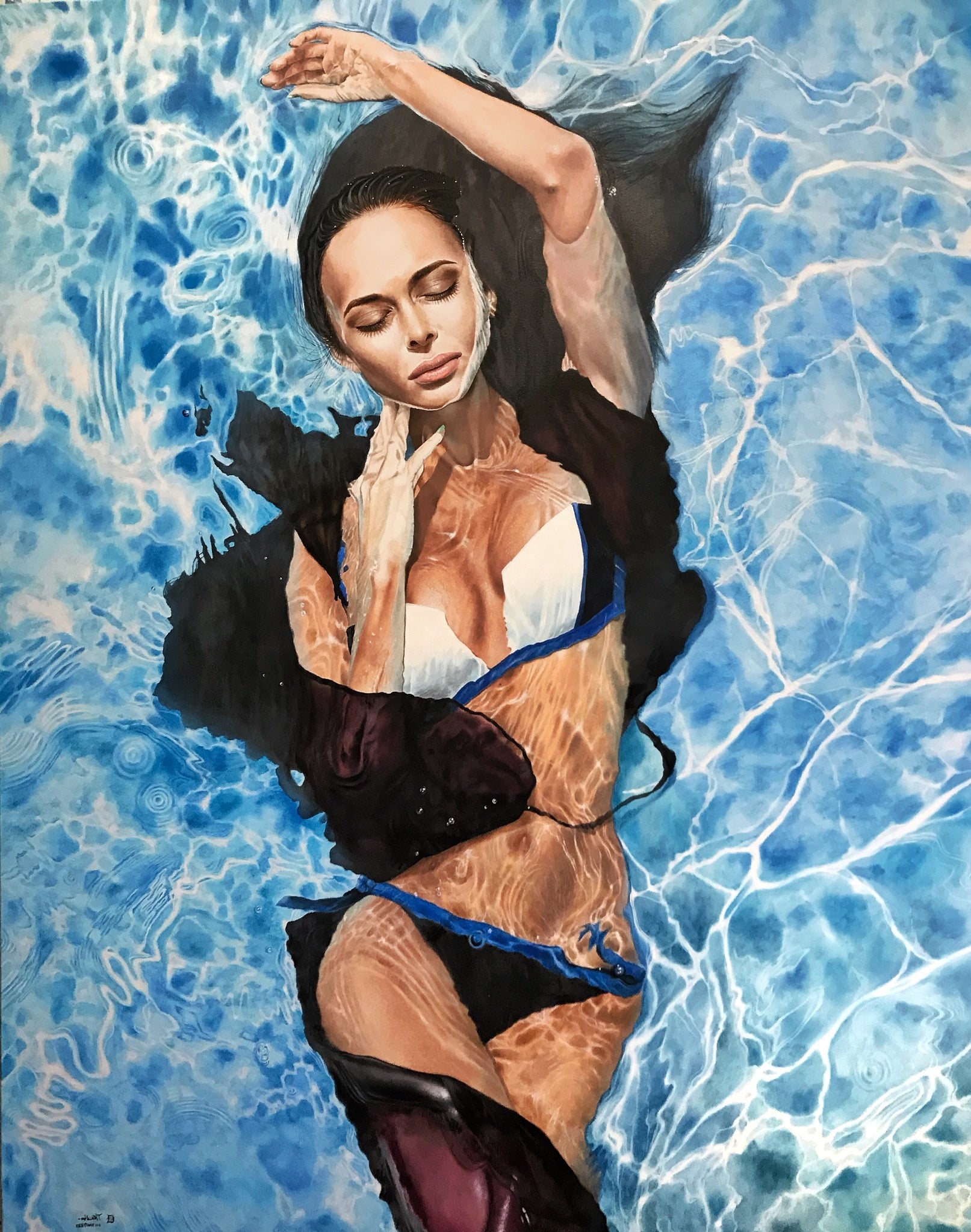 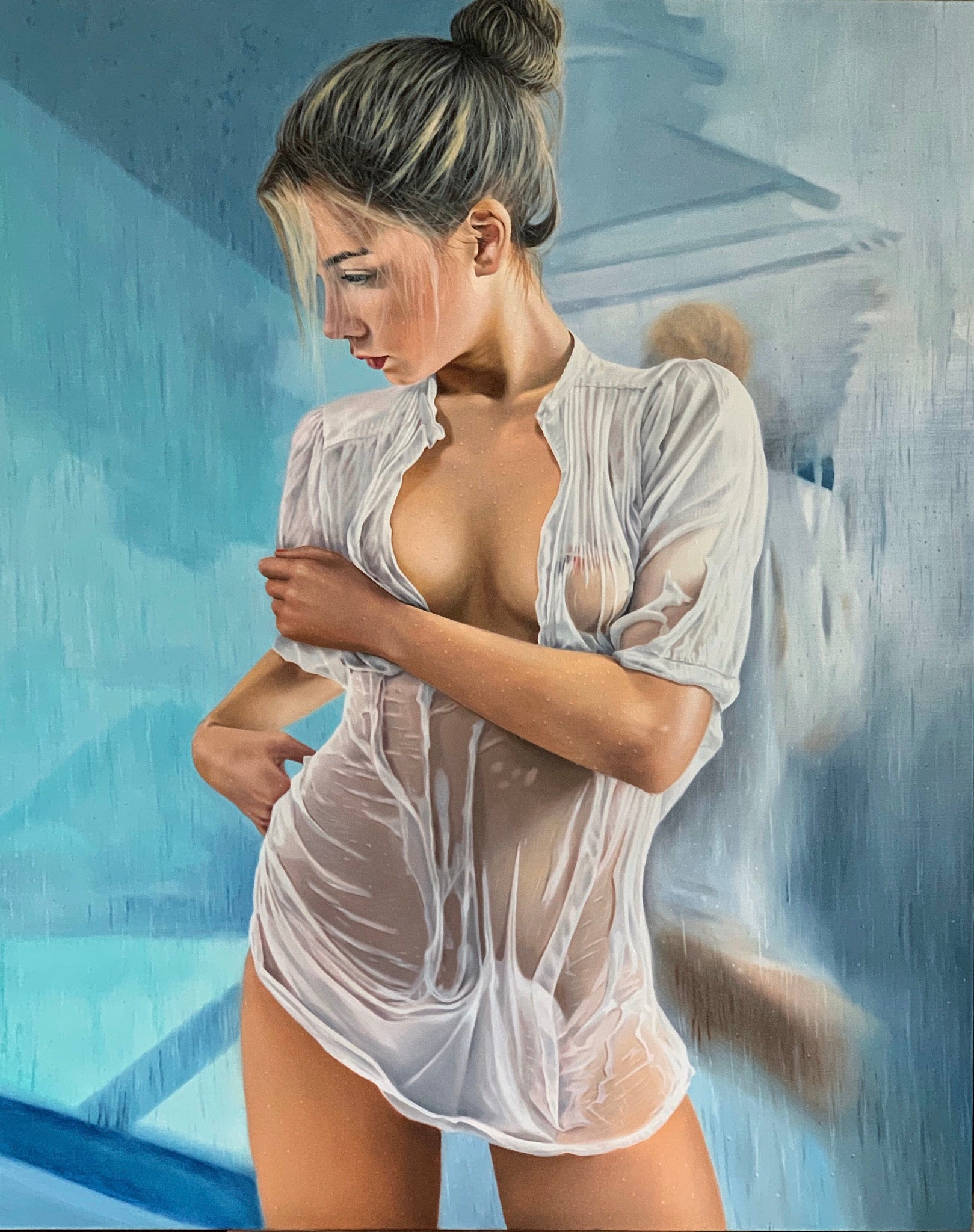 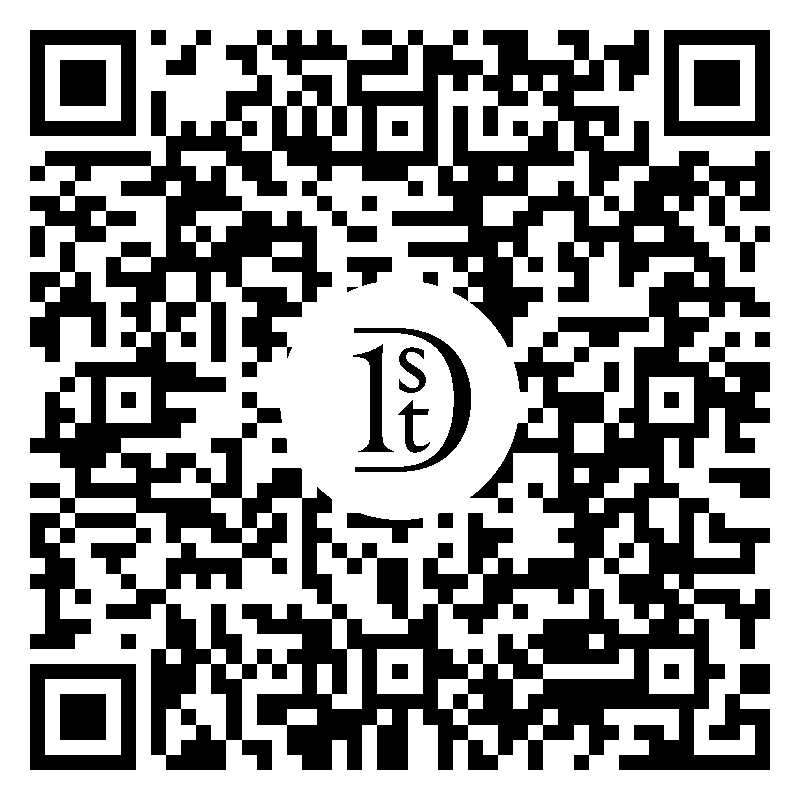 George Henry Hall (1825-1913). Cupids, 1875. Oil on canvas, 6 x 9.25 inches; 10 x 13.25 inches framed. Original frame with label verso. Excellent condition with no damage or restoration. Signed and dated lower right. Price on request Biography: Birth place: Manchester, NH Addresses: Primarily in NYC from 1852 Profession: Still-life, genre, portrait painter Studied: between 1849-52 in Paris and Rome; and Düsseldorf Royal Acad. with Eastman Johnson Exhibited: PAFA, 1853-68; Royal Acad., British Inst., Suffolk Street Gal., all in London, 1858-74; Brooklyn AA, 1861-81; NAD, 1862-1900; AIC, 1888; Boston AC, 1881, 1889 Member: ANA, 1853; NA, 1868; Century Assn. Work: MMA; BM; BMFA Comments: Best known for his still-lifes, he specialized in detailed and vividly colored fruit and flower paintings. Although the table-top setting was common in his work, his preference for placing his still-lifes in natural settings is indicative of his devotion to the aesthetic philosophy of John Ruskin. He grew up in Boston and began to paint about 1842. He spent several years in Europe before settling in NYC about 1852. He made many trips to Europe and North Africa between 1860-95, and was also well-known for his exotic genre pictures of North African and Italian peasant life.

George Henry Hall was a popular and highly esteemed American artist, “in his time . . . the best-known specialist of still life in the mid-nineteenth century” (William H. Gerdts, Painters of the Humble Truth: Masters of American Still Life, 1801–1939 [1981], p. 93). Born in Manchester, New Hampshire, Hall was initially a self-taught portrait and genre painter, working in Boston from 1842 to 1849. He began to exhibit at the Boston Athenaeum in 1846 and showed there regularly through 1868. In 1848, Hall extended his patronage circle to New York City, selling three pictures to the American Art-Union. He began, as well, a mentoring correspondence with Andrew Warner, the influential Corresponding secretary of the Art-Union. Although Hall hoped to travel to Italy to hone his artistic skills, at Warner’s urging he amended his plan and agreed to study at the academy in Düsseldorf, Germany, which was becoming an important training ground for American painters. (For a discussion of American artists at Düsseldorf, see The High Museum of Art, Atlanta, Georgia, The Düsseldorf Academy and the Americans: An Exhibition of Drawings and Watercolors, exhib. cat. [1972]. For an early reference in the literature to the Hall/Warner correspondence, see Patricia Hills, “The Genre Painting of Eastman Johnson: The Sources and Development of His Style and Themes,” [Ph.D dissertation, New York University, 1973; Garland Pub., 1977], pp. 27–31.) Emanuel Leutze, a German-born American artist with strong ties to the Art-Union, had been among the first Americans to go to Düsseldorf, arriving in 1841. Richard Caton Woodville, another protégé of the Art Union, studied in Düsseldorf in 1845–46. In 1849, John Godfrey Boker opened his Düsseldorf Gallery in New York City, putting the merits of the German school front and center before the American art public. More than offering just encouragement, the Art-Union (presumably with Warner’s warm advocacy) subsidized Hall’s German study with the purchase of seven canvases in 1849. Hall traveled to Europe with his good friend, Eastman Johnson, who, at Hall’s urging, also solicited patronage from the Art-Union, and was rewarded by the purchase of two of his crayon drawings. Hall and Johnson sailed for Europe in August 1849, landing in Antwerp and making their way to Düsseldorf.

Hall remained in Düsseldorf for one year, moved to Paris for further study, and then went on to Rome before returning to New York in 1852. Although the Art-Union ceased operations in 1852, Hall settled in New York and exhibited his European-inspired genre and figure paintings (along with an occasional portrait) at the National Academy of Design, where he was elected an associate academician. In 1857, Hall showed Sweet Peas: A Study from Nature at the N.A.D. and A Study of Sweet Peas at the Boston Athenaeum, the first records of his exhibiting the still-life subjects for which he was to become well-known. As the subtitle “A Study from Nature” indicates, Hall’s early still-life work was influenced by the painting aesthetic of “truth to nature,” the rallying cry of the English art critic and arbiter of taste, John Ruskin. Hall’s still life paintings of the 1850s and 1860s are precisely drawn and colored evocations of fruits and flowers, very much consistent with the style of the American Pre-Raphaelites. (See Linda S. Ferber and William H. Gerdts, The New Path: Ruskin and the American Pre-Raphaelites, exhib. cat. [New York: Brooklyn Museum of Art, 1985] for the most recent and thorough discussion of this subject.)

Hall exhibited energetically throughout his career and was a constant presence in the major annual exhibitions of his day. In addition to The Boston Athenaeum, the American Art Union, and the National Academy of Design, Hall also showed at the Pennsylvania Academy of the Fine Arts, Philadelphia, from 1853; the Brooklyn Art Association, New York, from 1861; The Boston Art Club, in 1881 and 1889; the Art Institute of Chicago, in 1888; and in London, at Grosvenor Gallery, in 1889 and 1890. In 1868 he was elected an academician at the National Academy of Design, taking an active role there as treasurer and as a member of the governing council at various times. He also belonged to the Century Club in New York City and frequently exhibited his pictures there, where they were seen by the artistic and literary elite of the time.

In the 1860s, Hall concentrated on still-life painting, a choice that appears to have been very financially rewarding. The Cosmopolitan Art Journal singled Hall out in a March 1860 article, “The Dollars and Cents of Art,” noting the handsome prices the artist was receiving for his still-life paintings (as cited in William H. Gerdts, op. cit., p. 93). Like a number of American artists, Hall periodically sold groups of his canvases in consolidated sales in order to raise money for foreign travel. In 1860, for example, Hall sold 143 paintings, many of them works that he had exhibited at the National Academy of Design, which realized sufficient money to support him in Spain for a number of years. On April 18, 1863, the New York Evening Post reported that “the sale at auction of the pictures of George W. [sic] Hall shows that the fine arts are not languishing” (transcript in Hirschl & Adler archives). Thus, even in the darkest days of the Civil War, Hall realized over $7,000 from a group of works whose images included both still-life and European genre subjects. In 1865, Hall did even better, raising over $12,000 in a sale of “seventy-five small but carefully elaborated fruit and flower pieces” (Henry Tuckerman, Book of the Artists [1867], p. 482).

Though never an expatriate, Hall demonstrated by his frequent and lengthy trips a great zest for the life of an American artist in Europe. He spent an accumulated twenty one years of his career on the Continent, primarily in Spain and Italy. In 1872, Hall went to Italy and lived for a year in Rome before marrying a woman from Capri. In 1875 and 1876, he traveled to Egypt and Palestine, extending his search for exotic subject matter and fanciful bric-a-brac to satisfy American tastes. Hall returned to Italy for a four-year stay in 1883. During this trip he established a close friendship with two expatriate American painters who were themselves best friends, Elihu Vedder and Charles Caryl Coleman. Coleman had owned a villa on Capri since 1880.

In the decade of the 1870s Hall resumed figure and genre work, while continuing his successful career as a still-life painter. In addition to extensive travel, he established studio/residences both in New York City and in the Catskill mountains. Beginning in 1867, Hall spent summers in the Catskills, near the village of Palenville. From 1874 to 1883, he was a tenant at the famous Studio Building on West 10th Street in Greenwich Village, the center of New York City art life. In Palenville, Hall contributed to the local color by covering the chimney of his studio cottage with tiles he brought home from Spain, a design choice sufficiently idiosyncratic and exotic that the Hall cottage became one of the local tourist attractions. When Hall painted Still Life of Flowers in a White Vase in 1860, he was enjoying his first crest of popularity as a still-life painter. Here Hall puts these lovely and delicate flowers into a porcelain case and places them on his characteristic polished wood table, offering the viewer an image of grace, elegance and simple domestic charm.

(Biography provided by Hirschl & Adler)
About the Seller
5 / 5
Located in Hudson, NY
Platinum Seller
These expertly vetted sellers are 1stDibs' most experienced sellers and are rated highest by our customers.
Established in 2000
1stDibs seller since 2015
126 sales on 1stDibs
Typical response time: 2 hours
More From This Seller
View All From Seller