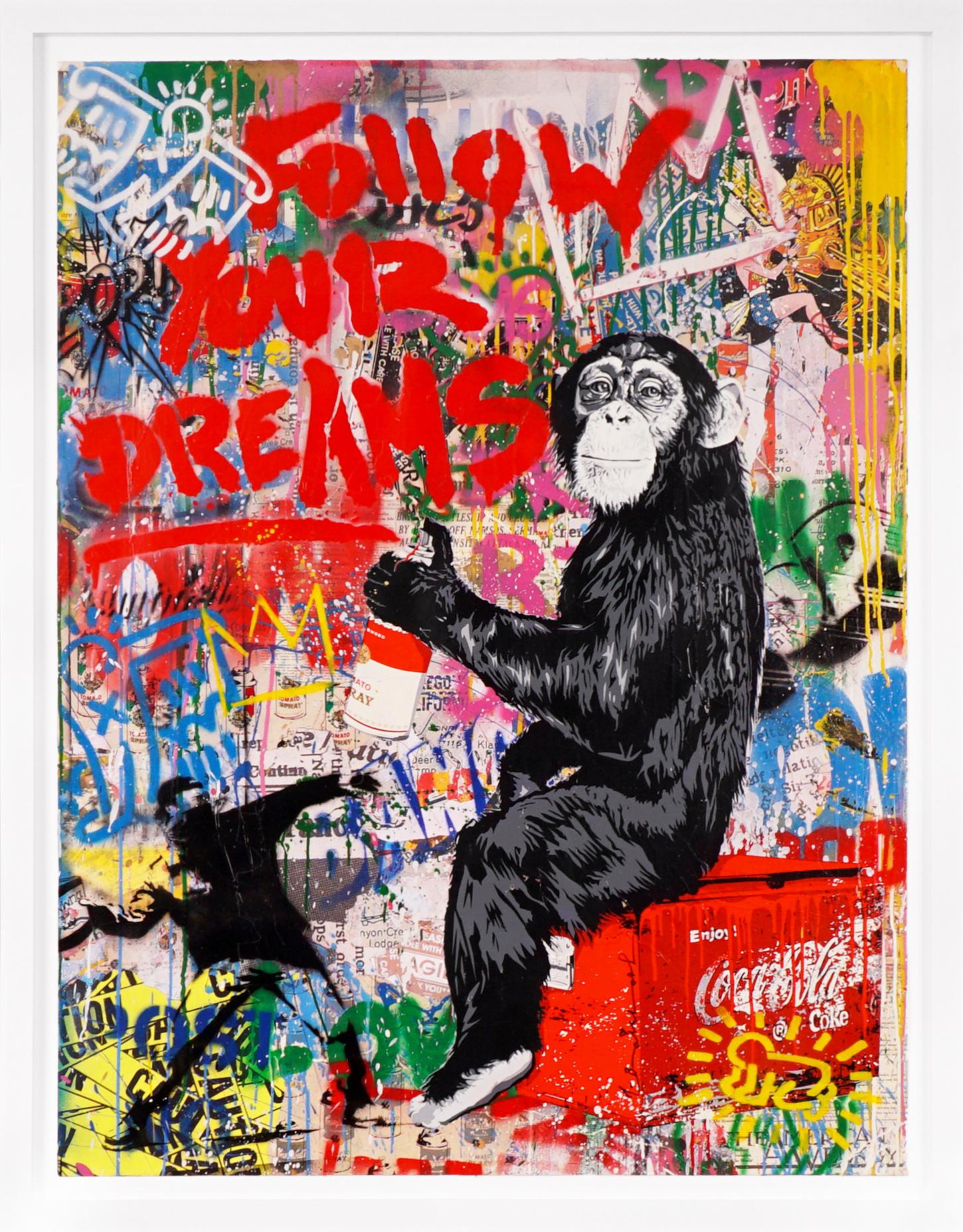 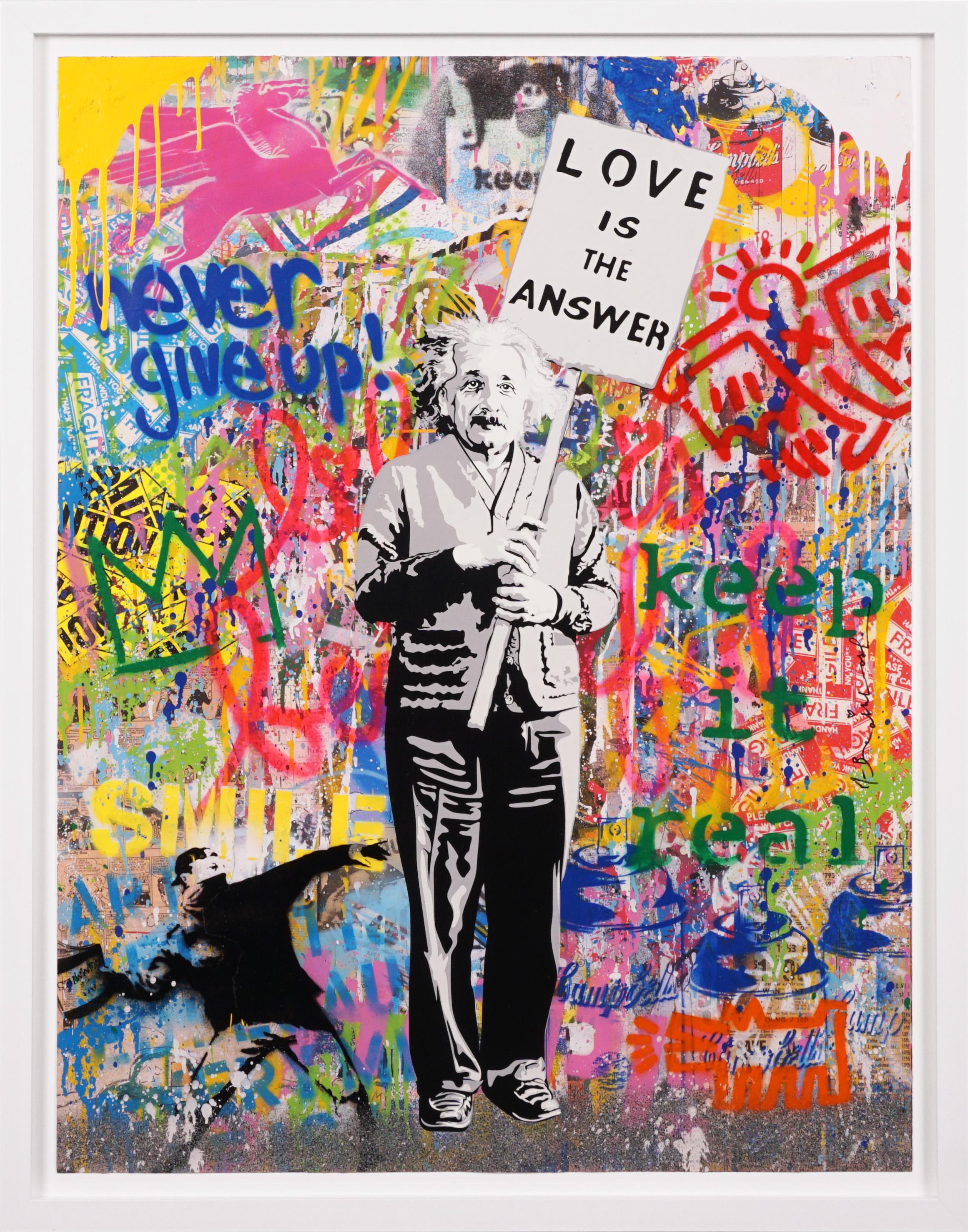 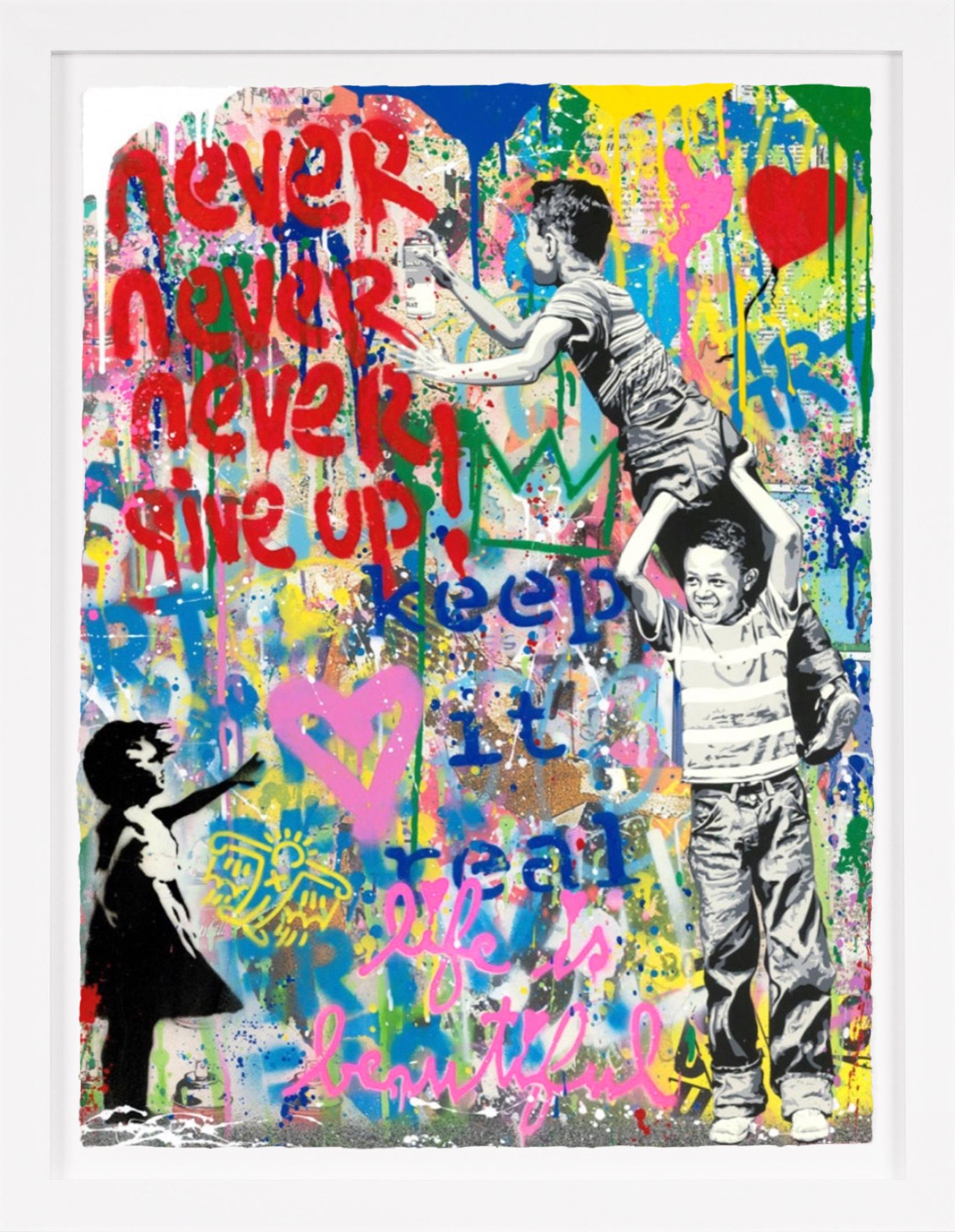 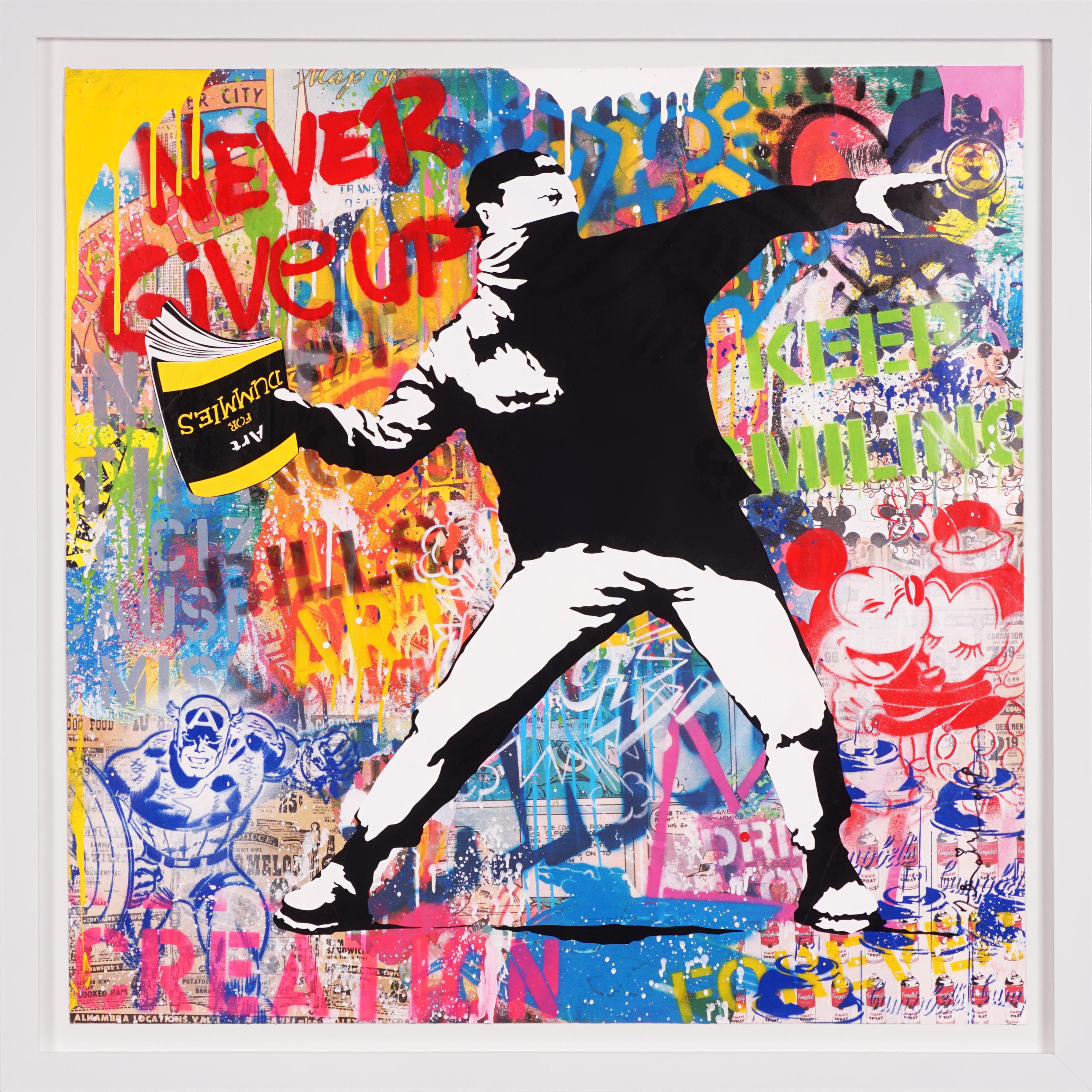 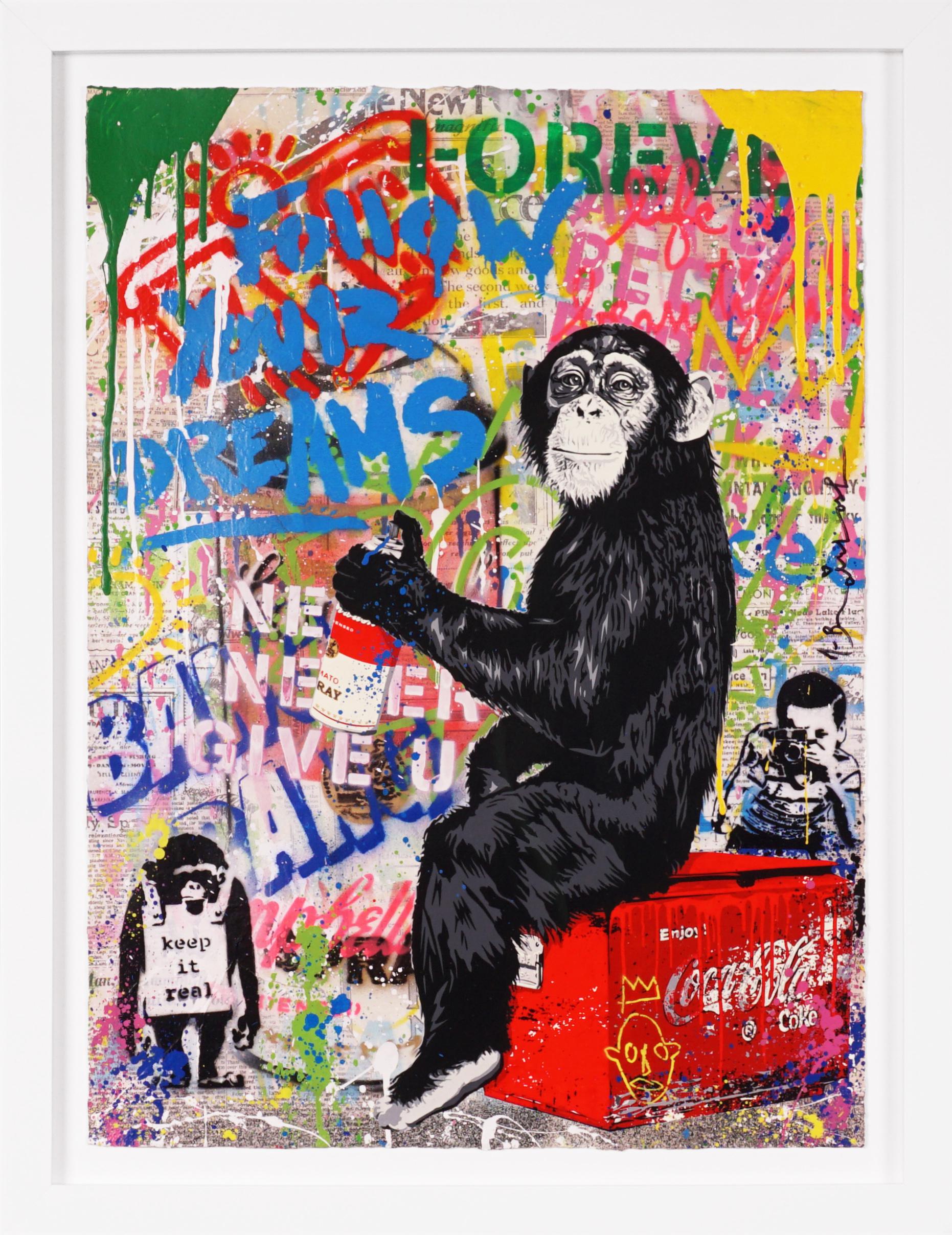 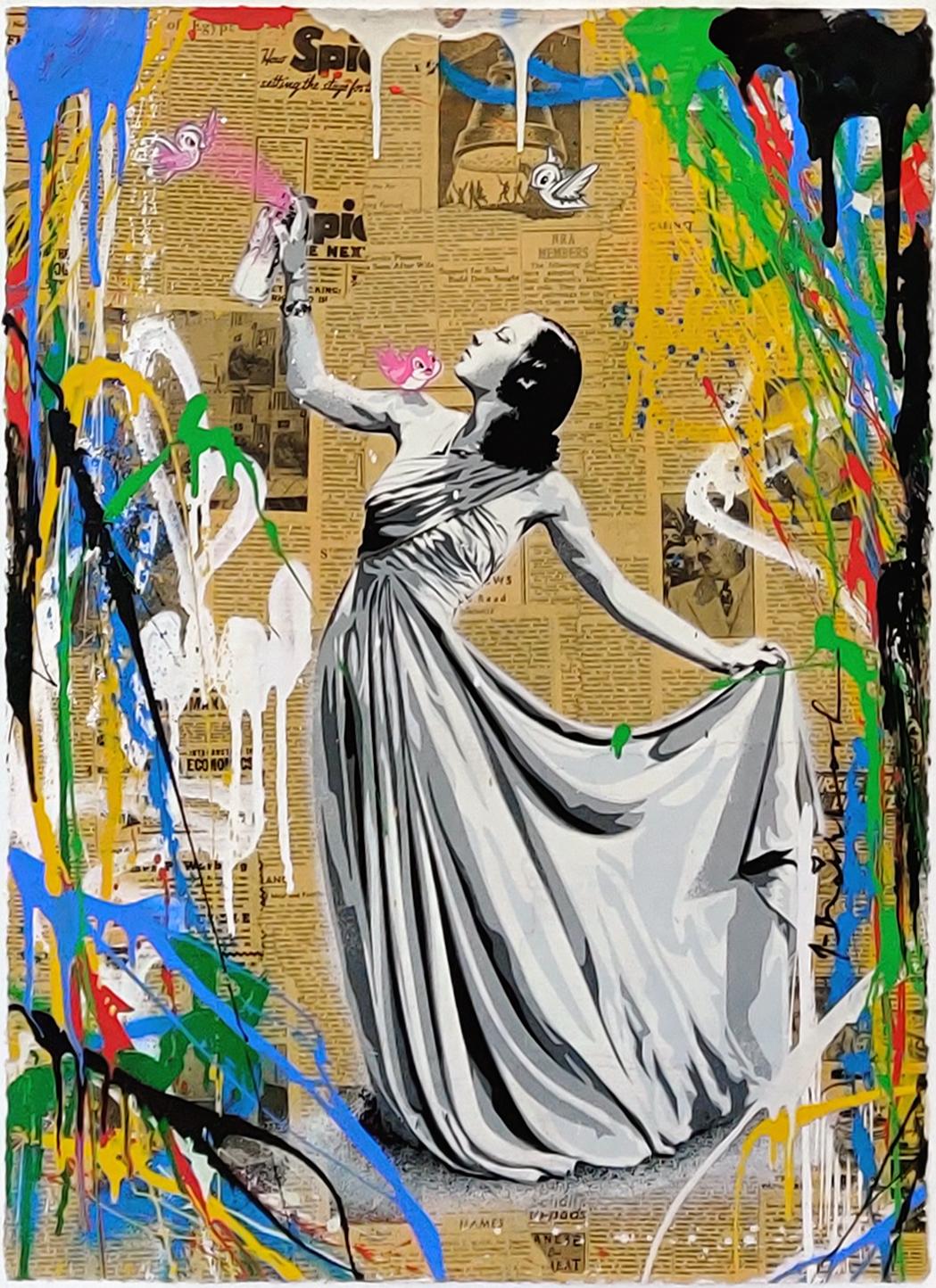 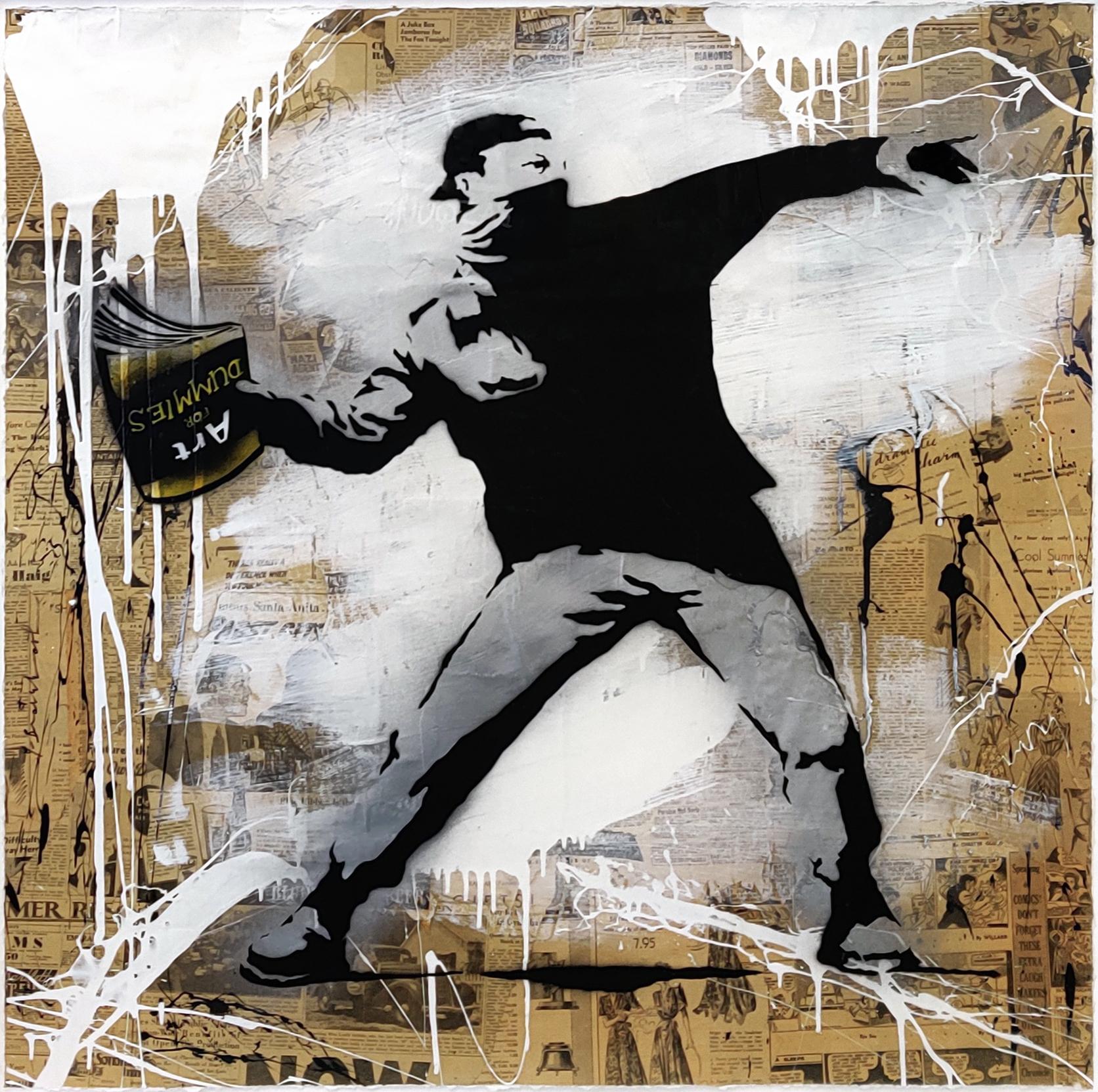 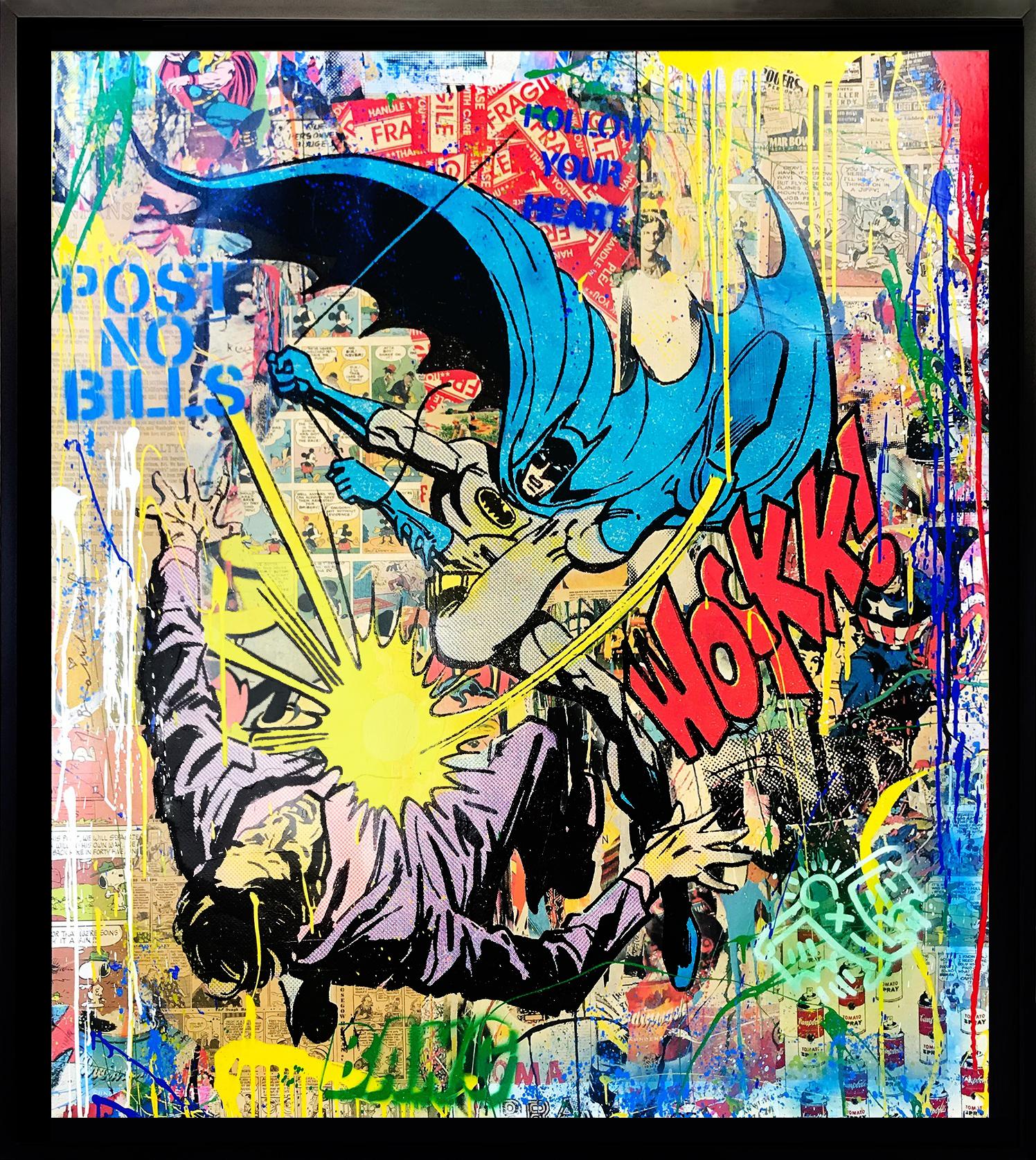 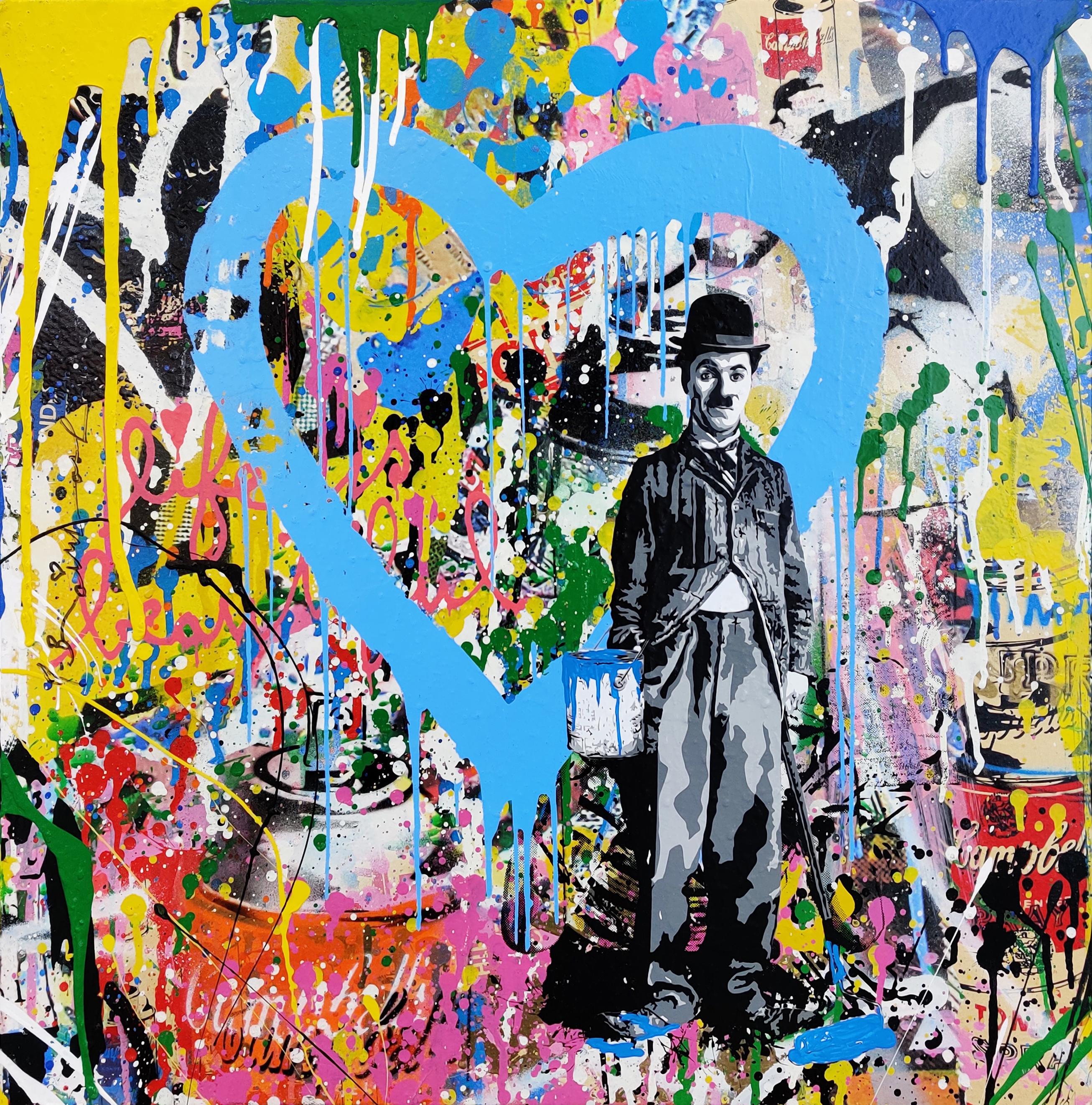 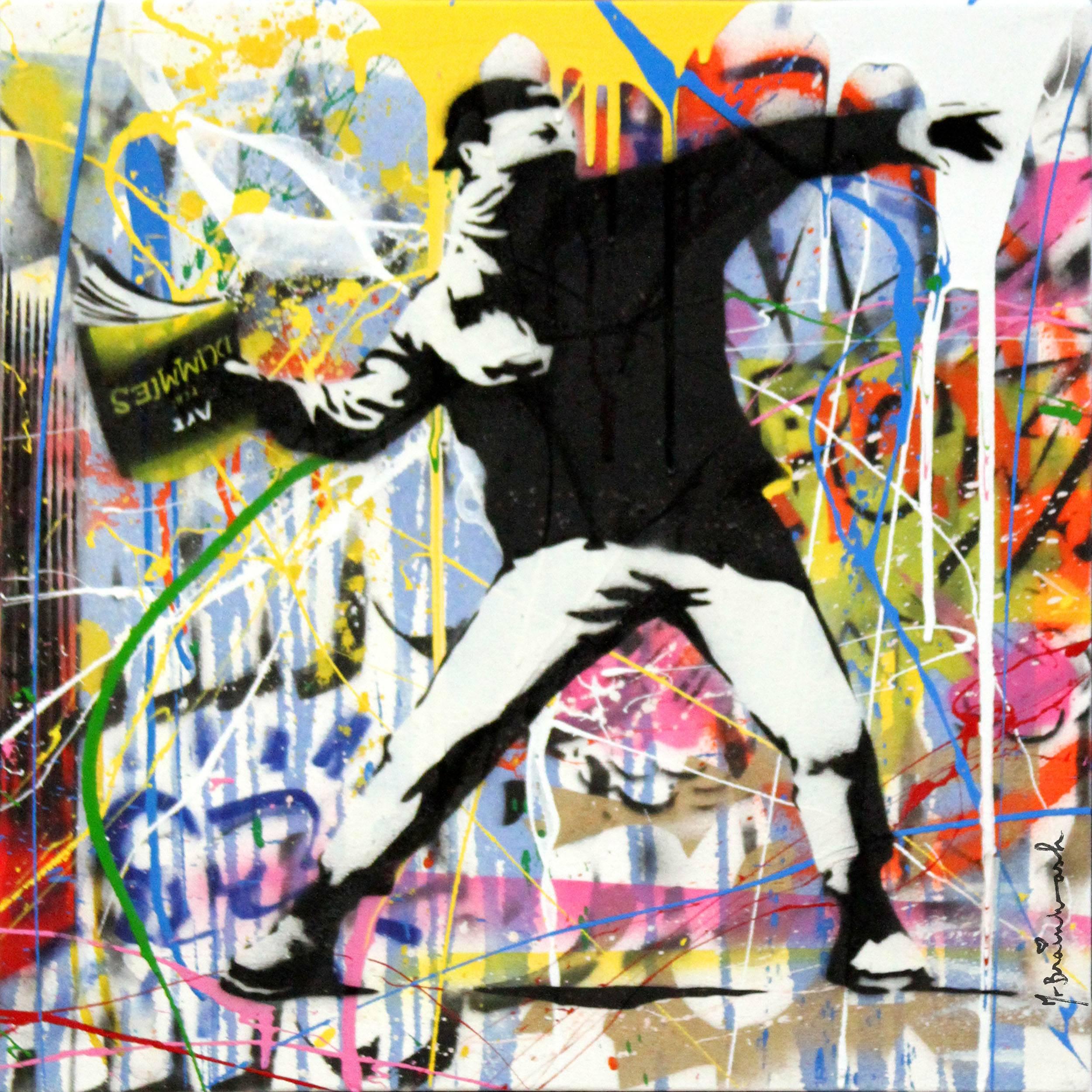 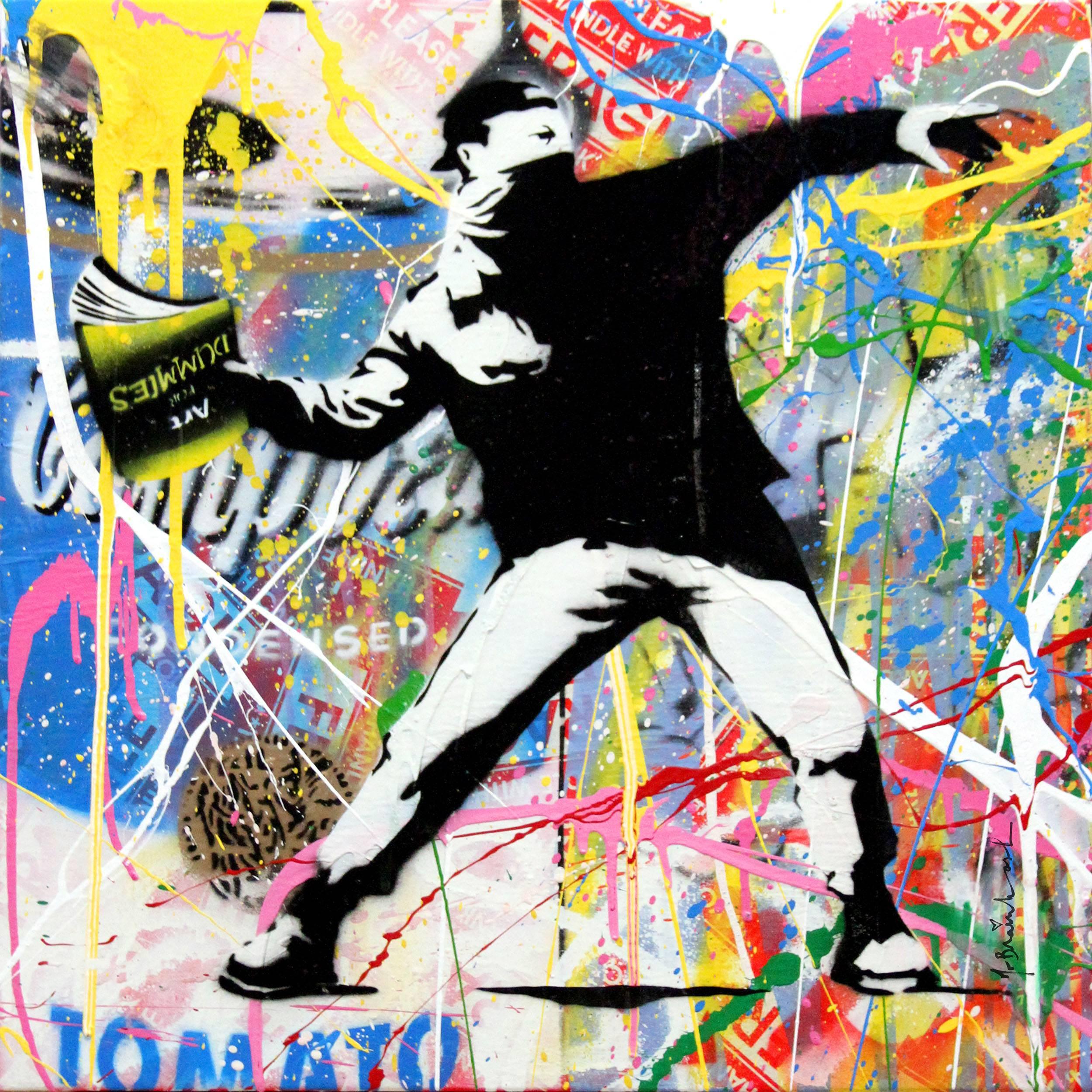 The stately unique ‘Balloon Girl' street pop art painting on paper by french contemporary street-artist Mr. Brainwash, was created in 2021 in his signature style of layering paint, stencil, and mixed media on paper to create a cultural commentary in vibrant visual format. Dripping paint, colossal stencil iconography, layered nostalgic cartoon collage, and charismatic text overlay creates the spontaneous composition of this quintessential Mr. Brainwash artwork. Beloved by collectors, Mr. Brainwash artworks are created by hand and entirely original, each painting has unique elements exclusive to the work that pay homage to pop art history motif by incorporating themes from artists such as Andy Warhol, Jean-Micheal Basquiat, Keith Haring, Banksy, and even iconic celebrities like Marilyn Monroe and Kate Moss. Utilizing nostalgic iconography from Coca Cola, Campbell's Soup, and even Wonder Woman from Marvel comics, Mr. Brainwash has created a perfect balance of playful freedom and comforting familiarity. The contemporary street-style artist references pop culture iconography from art history and beyond to create a visual dialogue that effortlessly transcends both time and art trend by speaking to generations past and present in a way entirely his own. Mr. Brainwash has become well known for his iconic mixture of fine art meets graffiti style art that has taken the main stage in contemporary collections. The unique blue chip 'Balloon Girl' painting is a brilliant mix of both the street art and pop art worlds with exciting hidden imagery, spirited color palette, uplifting text, and sentimental cartoons that create the instantly recognizable signature Mr. Brainwash motif. The archetypal phrases he has become world famous for inspire and elevate viewers, such as, "Life Is Beautiful", "Follow Your Dreams", "Keep Smiling", and "Love Is The Answer". Mr. Brainwash's artistic ethos is based on making art a positive way of experiencing life; by living in the moment, questioning the status quo, and committing to the pursuit of happiness. The original pop artwork is signed by the Artist on the front right side and on verso, it arrives ready-to-install in a custom made glossy white lacquer frame and museum caliber non-glare UV protective glass with hooks on reverse. Mr. Brainwash is a French street pop artist and videographer known for his large-scale installations and prints of celebrities like Madonna, Kate Moss, and Marilyn Monroe. His practice of subverting cultural iconography and appropriation borrows from Andy Warhol, Keith Haring, and Bansky. Fellow street artist Alec Monopoly has said that he considers Mr. Brainwash a mentor. He is perhaps best known for his role in the creation of Banksy’s documentary ‘Exit Through the Gift Shop’ (2010), which features Mr. Brainwash’s rise to success in the street art scene. Much like Keith Haring, Jean-Michel Basquiat, and Andy Warhol, Mr. Brainwash's popularity in pop art happened almost overnight after the premiere of the film, in which he remarks, “Banksy captured me becoming an artist,” Mr. Brainwash has said. “In the end, I became his biggest work of art.” Born Thierry Guetta, he moved to Los Angeles when he was 15, where he attended high school before dropping out. The artist later ran a successful vintage clothing store in the city. His interest in street art was spurred by a visit to France in 1999, where he learned that his cousin was the famed graffiti artist Space Invader. Having developed a knack for filming, Mr. Brainwash started to record the nightly escapades of Invader and other street artists, such as Shepard Fairey. In 2013, he was included in the exhibition “Art Wars” at Saatchi Gallery in London. Mr. Brainwash has since developed an exceptional international reputation beyond hype-culture, his followers are captivated by his use of positive messages, uplifting outlook, and retrospection of life through street and contemporary art alike in which his global growing fan-base can't get enough. In present day, Mr. Brainwash's international fan base of collectors has propelled his blue chip artwork into the upper tier of desirability where he has joined the ranks of contemporary pop art masters such as KAWS, Roy Lichtenstein, and Jeff Koons. 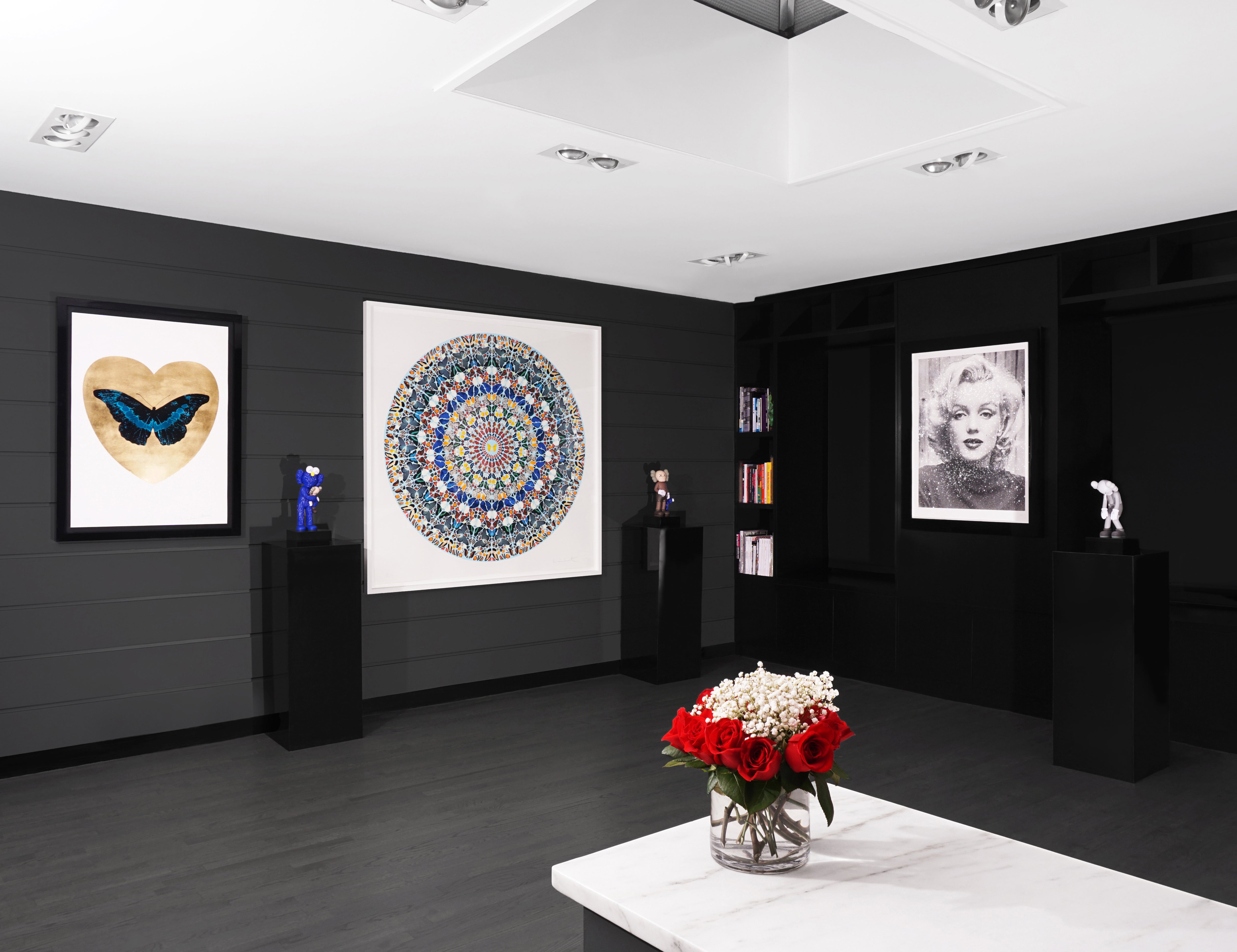 About the Seller
5 / 5
Located in New York, NY
Vetted Seller
These experienced sellers undergo a comprehensive evaluation by our team of in-house experts.
1stDibs seller since 2018
19 sales on 1stDibs
Typical response time: 2 hours
More From This Seller

US$24,500
CHAPLIN
By Mr. Brainwash
Located in Aventura, FL
Original mixed media painting on canvas. Hand signed on front; signed and dated on verso with studio catalog number and thumbprint. Canvas is stretched. Artwork is in excellent co...
Category